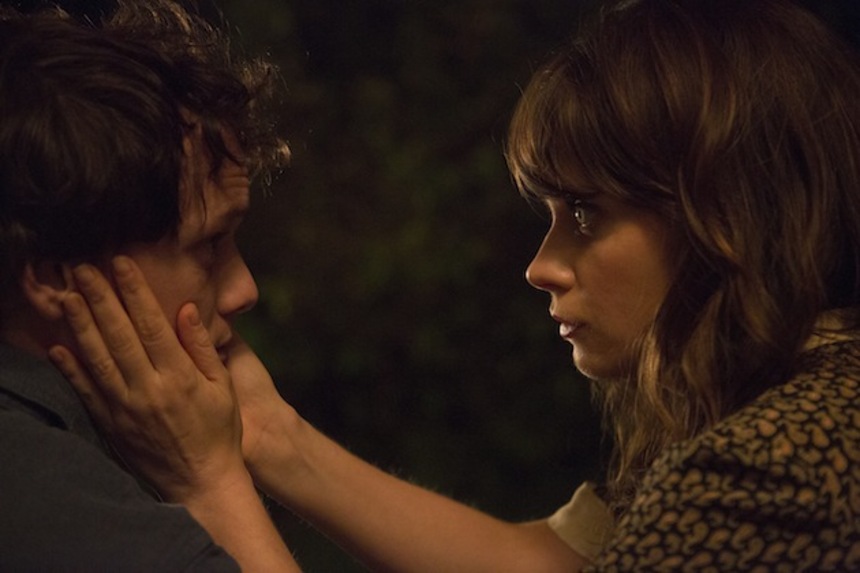 We humans often like to think of ourselves as creatures of habit. It helps to compartmentalize our world, making order out of chaos. As someone who operates quite often from his head, habits are important. Writing movie reviews, attempting to express in words an experience which often goes far beyond such language, helps me as much as it excites me. There I am hurtling towards the chaos, ratcheting up the intensity on an imaginary dial, wrestling it into the calm arms of fate... my fate.

But what if there was no chaos? What if that was just another way to compartmentalize something far more complex, nuanced, and ultimately quite simple. Like Anton Yelchin's quiet, soft gazed Pierre says in Zachary Sluser's debut feature The Driftless Area: "life is fun; sometimes you watch the leaves move, sometimes you get laid. It's fun." He says this to his best friend Carrie (Alia Shawkat), almost in a trance, not quite here or there; or perhaps everywhere. It seems uncanny, almost like they were the words of a dead man sheltering one last beam of life. Perhaps that is too poetic of a way to think of it. Perhaps, it is something far more simple.

When I originally sat down to write this review, it was at the Aruba International Film Festival last October. The morning after I had seen the film, I found myself walking along Palm Beach, near the local multiplex and the dozens of resort hotels that lined the southern coast of the island nation.

I placed myself in that spot between the water and the sand; the wet world and the dry world; the place where both worlds unite. Can we call this the shoreline? Or is it an even more finite spot than that? Perhaps it is less about the names we give to these things and more about the feeling. Walking along, the water draping across my feet, I felt this is where life is at its clearest and most fluid. Could this be the driftless area? Well, it is a driftless area.

The driftless area laid out across Sluser's metaphysical tale of big-eyed romance and small town crime is an area in Wisconsin actually called as such, sprawling with what us cinephiles would call a classic American landscape, personified by a hearty, rustic populace. This is where we find Pierre, a young man who lost his parents prematurely, stepped out into the big wide world to little fanfare, then returned home to even less. He bartends at a spot nestled somewhere off the highway, surrounded by the long shadows of an ancient forest. He looks like a daydreamer, but daydreams of the uneventful.

The driftless area is also where Pierre meets Shane, played with a wily smugness by John Hawkes. Giving Pierre a lift, Shane aims to not only get 20 bucks off the kid for a rather short ride, but also the rose bush he's supposed to be delivering to a girl. Shane gets a real kick out of wrestling away other people's things, including a bag of cash, which sits by his feet in the truck. Call it the thrill of wrestling with another's fate, and the entanglement that can then ensue.

And so, before either of them really know it, Pierre and Shane's fates become intertwined, propelled on by a third person, Stella, played by Zooey Deschanel, the young woman Pierre fancies, and the one fatality in an arson fire set by Shane. But if Stella is dead how can Pierre know her? 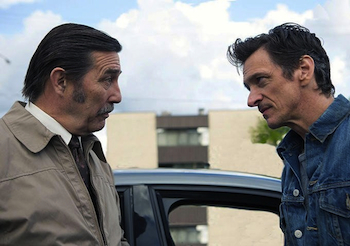 What fascinates me about a film like The Driftless Area is its willingness to accept the place and time outside of a place and of a time. Through certain events that unfold in the film we come to learn that Stella, Pierre and Shane are all, in some sense of fact, both living and deceased at the same moment. There's no explanation for such things in terms of practical logic, but we don't need one. It's just a fact of the universe and how our souls vibrate: we are just as dead as when we are living as we are living when we are dead. Whether we understand it or not, what matters is that we take notice. The film takes its metaphysics quite literally then, which I feel is a wholly warranted, totally cinematic approach; something that is actually so fundamental to an experiential medium as to almost be a moot point. Stuff like this may also confound some viewers that want those hard answers.

The Driftless Area isn't on a quest for answers though. It is a film with an observant gaze and dry sense of humor, one that is in no hurry to get anywhere and tell you something important. It is more interested in how you draw your own experiences to this experience; urging you to cull your own message from its mysteries. As someone who struggles with living in that place between the head and the heart, watching the film was an effortless experience, often a delight that had me smirking at the smallest of details. Writing about the film, something I was very much looking forward to do, is where I am finding challenge. I don't want to spoil my experience with too many words, yet here I am, diving into impressions, moods, anything to relay back to you, the reader, what I had felt... what I had experienced.

Adapted from Tom Drury's novel of the same name by Sluser and the author, our characters talk with an Americana mysticism, as if they are hypnotized, caught somewhere between a poetic verse and the wind whispering at the window.  The film's moods and machinations fall curiously somewhere between a Coen Brothers crime caper, the existential mysteries of late period Krysztof Kieslowski, and the hypnotic bewilderment of Herk Harvey's cult classic Carnival of Souls. Shot by Norwegian cinematographer Daniel Voldheim with a gentle naturalism that hints at the magic of the day, Sluser and his actors craft a sonnet for the breath one takes right before definition.

This is the moment where all possibilities, all paths in the universe have comfortably settled. The cosmic connections turn to constellations of self, of soul, of her and him; of it all. It is the cinematic moment unfolding with a ruminative ease, a strange joke, a shot in the night, and a girl standing on the shores of whatever comes next.

This review was originally published in slightly different form during the Aruba International Film Festival in October 2015. The Driftless Area releases April 26th, on iTunes and other VOD platforms in the United States.