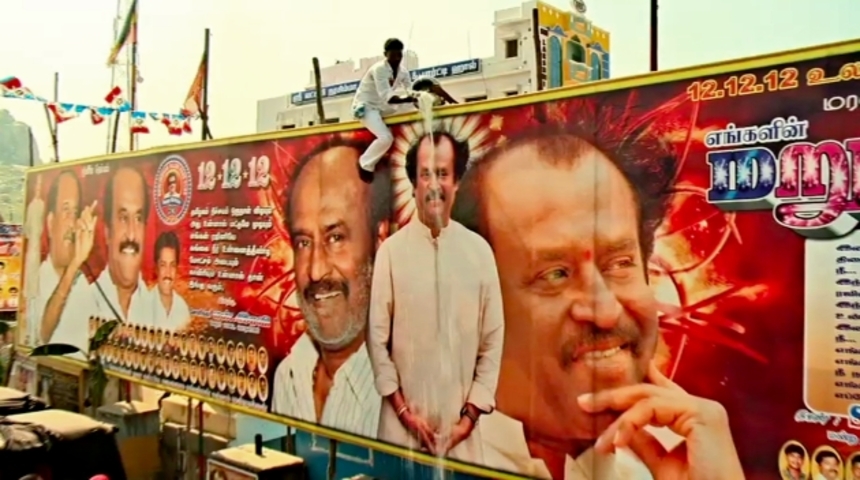 There are movie stars and then there are MOVIE STARS, and on some level beyond the latter, there exists Superstar Rajinikanth. For nearly forty years, this former bus conducter has inspired almost religious devotion from his fans both inside and away from his home territory in Tamil Nadu, India. Director Rinku Kalsy explores the cult of Rajinikanth fandom in For the Love of a Man and discovers that sometimes the adoration that his fans point outward may be better focused back at their own lives.

In Tamil Nadu, most of the big male movie stars have honorific nicknames. You've got Ilayathalapathy (Young General) Vijay, you've got Thala (Leader) Ajith, Chiyyan (a character's name in an early film) Vikram, Captain Vijayakanth, Ulaganayagan (Universal Hero) Kamal Hassan, and on and on. But there is only one Thalaivar, and that is Rajinikanth. The word means leader, and it's not a nickname he gave himself. Across Tamil Nadu there are millions of disciples of the man who never asked for any of it, and yet his apparent spirit of humility and immense philathropy have turned Rajinikanth fandom into more of a religion than the actual prevailing theologies in many cases.

The film profiles several different Rajinikanth superfans in different private sector positions, but the basic story is always the same. These men, and they are exclusively men, devote their lives to Rajinikanth fan clubs and the madness that surrounds the Superstar at every turn. Whether it is organizing thousands of cinema tickets for his latest film for their fan clubs, or putting together charitable organizations to celebrate and imitate their leader, these fans focus their lives on the glorification of their hero.

While it sounds all well and good to devote your life ot charity and good deeds, the film makes very sure to take a look behind the curtains and show some of the dirt that is not so well hidden in the lives of these men. One man pawns his wife's jewelery to raise funds for a Rajinikanth fan club event, others set up special fan club film screenings and trash the cinema halls in reverent ecstasy, a third, and perhaps the most interesting of the bunch, utilizes a very vague visual similarity to the hero to make his living as an impersonator.

What they all have in common is that they live their lives for Rajinikanth, and without him, they'd clearly have no direction, even the ones with loving families at home. What Kalsy does with this film is to give some kind of hint at the mania that follows Indian film stars, and in particular, this one man who inspires a religious fervor in his fans -- many of which proclaim to be atheist, except when it comes to Thalaivar -- that fans of Hollywood films would find completely outrageous.

Last year's Being Bhaijaan, and exploration of the cult of fandom around Bollywood's icon of masculinity and heroism Salman Khan, gave a glimpse into Indian film fandom, but that film's subjects were rank amateurs when compared to Thalaivar's acolytes. For the Love of a Man is like The Life of Brian, but in the real world. Rajinikanth's fans supplicate themselves at his feet, both figuratively and literally when possible, and he asks for none of it. However, his overt deflection of their adoration only feeds the flames and inspire these fans to worship his humility.

Full disclosure: I am a fan of Superstar Rajinikanth. Any time a new Rajini film appears in cinemas, I'm there first day, first show. But, at the end of the film, once the adrenaline high has worn off, I go back to my life, put my son to bed, and give my wife a kiss. For the subjects of For the Love of a Man, the movie never ends, and it's aternately fascinating and horrifying as their fade away from their families and what really makes their lives whole.

For the Love of a Man

Do you feel this content is inappropriate or infringes upon your rights? Click here to report it, or see our DMCA policy.
ifflaindiaindian film fest larajnikanthRinku KalsyKamal AnandBabuK. HariharanG. ManiDocumentary

More about For the Love of a Man