Destroy All Monsters: Scarlett Johansson And Our New, Digital Plasticity 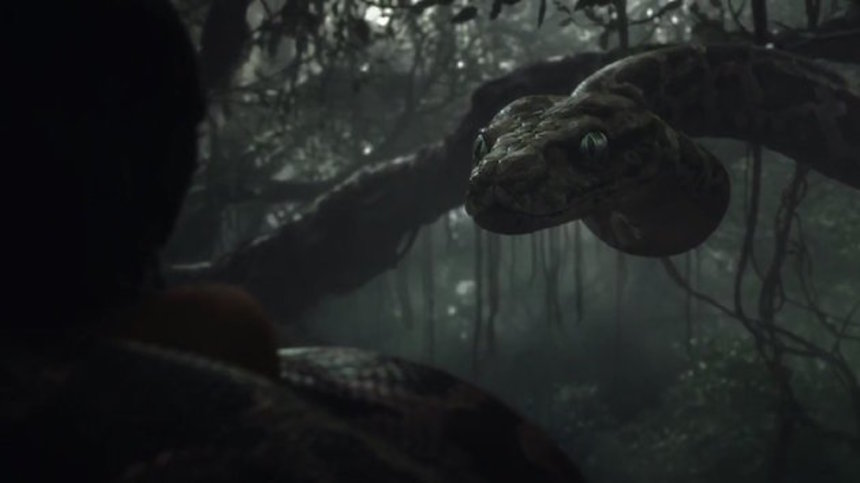 As a digital artifact, Jon Favreau's new adaptation of The Jungle Book plays it nearly straight. Much more so, anyway, than something like the Wachowski Sisters' Speed Racer - another film that made maximum use of digital environments around flesh-and-blood people, but which turned that opportunity into a chance to show how fluid and unreal those digital worlds could actually be, as a tool in their own right for storytelling and stylization. Speed Racer wasn't just edited; it was mixed.

The Jungle Book almost never goes this far, except in Scarlett Johansson's single scene as Kaa, the predatory snake who temporarily ensnares young Mowgli (Neel Sethi) in her coils.

As an avowed ophidiophobe, the specter of a man-eating python which might, at a guess, be three hundred feet long, would be more than enough to make me recoil from the IMAX screen. (I did.) In Favreau's hands, Kaa's sequence in The Jungle Book also allows him to play within the true formlessness of digital creations within a context that makes sense for the character, thanks to Kaa's traditional superpower of ensnaring minds.

Living within a thick tangle of vines, there are more than a few shots in Kaa's scene where we might notice, deep in the background, that something we thought was a tree is in fact yet another length of her seemingly immense body, as it begins to slither and undulate in that uncanny way that snakes have. It's freaky. Further, as Mowgli stares into Kaa's eyes, we see not the psychedelic hypnotism rings of the Disney animated film, but (far more cleverly) we see the eyes transform into a proscenium in which we will watch Mowgli's backstory.

Favreau's choice to play the digital incarnation of Kaa in The Jungle Book is Scarlett Johansson, which makes perfect sense. First and foremost, Johansson has one of Hollywood's great voices, always a good half-octave lower than you expect it to be, recalling Kathleen Turner at her mid-'80s height of sultry. (Stay through the end credits of The Jungle Book to hear Johansson take a crack at "Trust In Me" that will be lingering in your ears long after Christopher Walken's "I Wanna Be Like You" has finally recused itself.)

But beyond merely her voice, Johansson was pretty much made for this movie, and its seamless blending of performers with digital avatars. She is quickly becoming a one-woman cottage industry in exploring our relationship between our physical and virtual selves.

In a series of roles proceeding from Her to Under the Skin to Lucy, Johansson has been directly addressing the human/alt-human divide, in a series of meta-narratives that probe the otherness of non-human intelligence.

Meanwhile, in The Avengers and The Jungle Book, she's been attacking the same idea from a different direction, albeit in subtext rather than text: the performer unchained from a limited physical reality by the unlimited provenance of digital tools. Whether a superhero or a snake, Johansson's performance is the anchor point for characters who could best be described as live-action cartoons. Kaa and the Black Widow are as much a part of the work as Samantha, Lucy, and Under the Skin's "The Female."

There's a common thread of simulation running through all of these, and how the boundary between simulation and truth continues to shift and move within the expanding frameworks of the digital age.

In fact, based on these examples, I'd go so far as to describe Scarlett Johansson as one of the acting industry's only true auteurs. Few other actors tackle such a specific, relevant theme with consistent, sure-footed gusto. Her work as a performer in this decade carries such a precise and dedicated thematic progression that the only question mark along the way is around how she somehow didn't end up playing Ava in Ex Machina. That role seems right up her street.

This piece, I should probably now point out, is not intended as a defense of the whitewashing of Ghost in the Shell, which has become a significant talking point in the past few weeks (building on several months of substantial conversation on how Asian people and culture are treated by white Hollywood - conversation which will only, I think, increase in the months and years to come).

On the terms I've described above, of course, Ghost in the Shell - one of the ur-texts for the exact cinematic theme Johansson has been relentlessly exploring - is a perfect fit for the actress' ongoing project. One must also acknowledge, rightly or wrongly (this Pajiba piece excellently outlines the "wrongly"), the perceived market importance of a star like Johansson in the instance of Ghost in the Shell. She is a woman who - in an industry that anoints substantially fewer A-list females than males, at least in male-dominated genres like action, superhero, and science fiction - is seen as being one of only two women who could open Ghost in the Shell reliably for a North American audience. The other is Jennifer Lawrence, and neither of these women are Japanese.

Whether it's true that Ghost in the Shell needed Johansson in order to make money, it apparently needed her in order to get greenlit in the first place - and in a fantasy moviestar universe where issues of privilege and representation don't exist, it also must have presented an almost irresistible collision of artistic interests between the actress, the studio, and the project.

The market reality that drove all this, of course, sucks; and it creates the decision tree that leads to furor last week around the release of the first image from Ghost in the Shell. The picture sees Johansson's Major in profile, with enough visual signifiers in costume, hair, and makeup to bring her appearance dangerously within striking distance of yellowface.

And to throw gasoline on an already roaring fire, there was also the subsequent intimation that the producers of Ghost in the Shell might have been exploring digital techniques to further manipulate Johansson's, and other performers', faces - to appear "more Asian."

Now, without vetting the full story behind either of these revelations, Johansson's half-decade inquiry into simulation and identity has nonetheless taken an insensitive, real-world turn that darkens the whole project. Now that all performers can be enhanced and altered into semi-similar digital avatars onscreen (a pregnant Johansson herself spent some of last year as a digitally-applied face stuck to a non-pregnant actress' body, playing a sterilized character no less, in Avengers: Age of Ultron), real questions will have to be answered about what alterations are artistically justifiable, vs. those that are simply creating further balustrades of inequality in an industry (and art form) that already has plenty of them.

To return to the Wachowskis, for example: I will, at least, defend the artistic thinking behind (if not always the execution of) the race and gender fluid casting of the core performers in Cloud Atlas. The decision makes sense, at least in terms of what the story that the Wachowskis and Tom Tykwer were telling was trying to accomplish from a thematic and cinematic perspective.

This would also be a good time to point out that the filmmakers behind Ghost in the Shell decided not to go ahead with digitally race-bending their white performers - and let us be charitable and presume it was because the artistic content did not merit so particularly thorny and problematic a move, even when weighed against the also-problematic question of casting a white actress in a Japanese role.

But we are coming towards a wave of questions about how racial and gender signifiers can be applied to cinematic creations, nonetheless. There are four - four! - Avatar sequels coming, and no matter how tall and blue they may be, the Na'vi will remain thinly veiled stand-ins for indigenous tribes here on Earth. Tilda Swinton is dressed up in full Shaolin monk garb in Dr. Strange, right down to the bald cap, for ambiguous creative and marketing reasons that will be rigorously interrogated as we continue to approach that film's release. Wonder Woman, never a property that has particularly troubled itself to locate the Amazonian in its Amazon princess, sure put a lot of white women on Themiscyra for next year's movie.

This I know: in the digital age, identity may be, and likely is, as plastic as Scarlett Johansson's best films have suggested. Representation, though, is not - and these past few months have done an unnervingly good job of showing just how rigid and inflexible Hollywood's ideas about it remain.

Do you feel this content is inappropriate or infringes upon your rights? Click here to report it, or see our DMCA policy.
Ghost in the ShellHerLucyScarlett JohanssonThe Jungle BookUnder the Skin