Destroy All Monsters: DEEP SPACE NINE And The Challenge Of Community 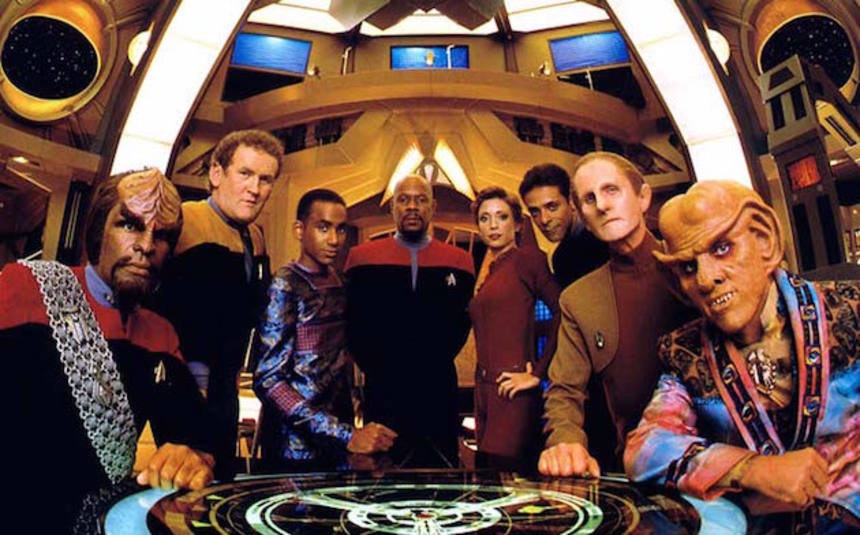 You owe Star Trek: Deep Space Nine a second look. It might be a good way to drain the time between now and Bryan Fuller's Star Trek reboot next year. The best aspects of Deep Space Nine set a benchmark that Fuller (who started his writing career with a one-shot on the series) will be lucky to hit.

Revisiting Deep Space Nine quickly demonstrates what a series of lasting depth and complexity it was. Far from merely being an early prototype for what we now take for granted as modern serialized storytelling on television (it was that as well), Deep Space Nine was also a serious, textured drama centered around a core idea whose relevance has only increased since it was on the air, and may continue to do so in the years and decades to come.

As a series and as a story, it was uncannily ahead of its time - and rewatching the show now, in 2016, gives me the eerie sense that the industry at large is only beginning to catch up to many of the things Deep Space Nine was routinely doing.

But I am getting ahead of myself. I have been with Deep Space Nine from the beginning in 1993, and as such, I am more defensive about it than I need to be. It began as, and in some ways remains, the red-headed stepchild of the Star Trek franchise. But critical thinking has certainly caught up to Deep Space Nine; it is celebrated in many corners as the best thing Star Trek has ever done.

I'd put myself in that camp, and I think I'm beginning to understand why. I grew up with Star Trek: The Next Generation - and I mean literally, I caught onto that show the week I started puberty, and its original broadcast elapsed right around the moment I settled permanently into my adult height of 6'0". TNG taught me a lot of the framework of how to think about the basic social issues of the world that was entering.

But Deep Space Nine was the first adult television show I ever watched, though I didn't even know it at the time. The "adult" factor is probably what made it a dodgy proposition for Star Trek fans back in 1993. "To boldly stay where no one has stayed before" was a running joke when Rick Berman and Michael Piller announced that they were creating a Next Gen spinoff series that would be set aboard an immobile space station.

Even the addition of Captain Sisko's very own starship, the Defiant, two seasons later, did little to quell the prevailing sense of "this is not what Star Trek is about" that hung over a franchise whose big brothers (and kid sister) were about zipping around the cosmos in ships named Enterprise (and Voyager), exploring strange new worlds.

Well, perhaps Deep Space Nine wasn't obviously what Star Trek was about. But, I'd argue, in foregoing the conventions of its own franchise, it did what all television series should be trying to do: its own thing. And by doing its own thing as well as it did, Deep Space Nine closed the loop: it transcended, and then emblematized, the absolute best of what Star Trek can accomplish.

What was it? Deep Space Nine's component elements were many. Part Star Trek (you can never completely remove the scientific exploration of space, and the moral dramas that take place there, from a Star Trek series). Part Western (space station Deep Space Nine was, and remains, a frontier town with a bench of supporting characters as deep and compelling as the regulars on Deadwood). Part workplace drama, which were proliferating on television then and continue to do so now. (No, DS9's operations center wasn't as exciting as the Enterprise's bridge - and wasn't meant to be. People brought their coffee to work.)

It was also, often, an outright comedy - bending towards satire in the thrice-annual Ferengi episodes, which tackled human consumerism and misogyny (and often, cunningly, linked the two) via the broad-brush heroics of a gang of idiots with gigantic ears. The series also tilted glibly self-critical in the once-a-year "Mirror Universe" anthology, where our heroes would be zapped into an alternate existence where, for all intents and purposes, the rules of 1993 television no longer applied, and our nominal cast members could be violent bisexuals.

Deep Space Nine was also often, of course, a fantasy, and a many-layers-deep fantasy that created Inception-like rings of meaning. It could cascade the invented frameworks of its own series bible (holosuites, prophetical Orbs, and general technobabble science) into episodes where our gang could knock off a casino in 1960s Las Vegas, lead a 99% revolution in 21st century San Francisco, or recast Benjamin Sisko as a closeted Black science fiction writer in postwar America, who might also be going insane.

And it was, for its final two years, a war drama par excellence; but here again, I am getting ahead of myself, because what seemed at the time like audience-baiting exploitation (Zip! Zap! Pow!) was, in fact, the endgame for Deep Space Nine's main project.

Deep Space Nine is about community, and more importantly, the effort of community-building. Partially informed by the aftermath of the 1992 L.A. riots, Deep Space Nine takes as its central drama the complex, and sometimes years-long, processes of planting your feet in a damaged community, taking ownership within it, and slowly, carefully nurturing it back to sustainable life.

Ben Sisko wanted nothing to do with Deep Space Nine when he was stationed there in the series' pilot episode, "Emissary." The space station was essentially an orbiting gulag hanging over the planet Bajor, which had just freed itself - by terrorist action - from sixty years of occupation by a vindictive military force, the Cardassians.

The discovery of a wormhole to a distant end of space, however, instantly turns Deep Space Nine into a waystation for trade, tourism and exploration that it is (importantly) patently unready to be. The Bajorans, who own the station, do not have a functioning permanent government and are still reeling from decades of oppression. The Cardassians, who only recently departed, are now kicking themselves for abandoning what has turned out to be a major strategic asset. And Sisko - to personalize the political - is still grieving the death of his wife, three years prior; and raising his son, Jake, alone.

The cast around Sisko is a heady group of abrasive personalities unparalleled in the history of Star Trek. A former Bajoran terrorist now grappling with the true responsibilities of nation-building in the wake of guerilla action. A disaffected blob of shape-shifting goo who passes his time (and satisfies his OCD) by running security on the station. A fuckboy Starfleet doctor who thinks he's in a Daniel Defoe novel. A crooked barman, running a penny-ante criminal organization in plain sight. A 300-year-old elder (in the body of a twentysomething supermodel). An exhausted engineer / harried family man who'd really rather just be playing with toys.

Importantly, Deep Space Nine solves for none of these personalities in the tried-and-true fashion of a Star Trek episode. OK, Sisko accepts that he must move on from the death of his wife by the end of the pilot episode. But the actual doing of that, and of raising Jake in a hostile environment, while balancing the demands of leadership and community-building at the same time, form the meat of the drama on the station for the ensuing seven years.

Quark never stops being a criminal. Odo never stops being an OCD blob of shape-shifting goo (though he does, rather sweetly, learn to open up a bit). O'Brien gets to play with his toys once he's made friends with Bashir, but the razor's edge adult reality of personal desires vs. familial responsibilities remains as complicated and ever-shifting as it would in real life.

And in the larger world of Deep Space Nine, the trials of establishing and maintaining a functional community - particularly, I'd note, a community of multiple, often conflicting, cultures - is under persistent threat by the larger political, economic, and natural forces at play.

Oh, and religious. Deep Space Nine remains the only Star Trek series to, without ever breaking Gene Roddenberry's commandment about the atheist future of the human race, allow that religion remains a powerful force in all the elements mentioned above: the political, the economic, and the natural. The Bajorans, a deeply religious people whose social goodwill is strongly influenced by a Pope-like figure called the Kai, prove a testing ground for how hard a secular institution must work to negotiate with, allow for, and adapt to the spiritual requirements of the people it serves.

These are all very real-world concerns, and as I said, they give Deep Space Nine the uncanny feeling of a television series whose modern relevance is only mounting over time, rather than diminishing (like, say, the social-issue-of-the-week approach taken by Star Trek and Star Trek: The Next Generation).

This is where I think Deep Space Nine vaults over its brethren to become the shiniest example of what Star Trek can accomplish - not because the original format's episode-by-episode morality plays were any less relevant in their time, but because DS9's whole-series approach to richly woven storytelling gives it a complex resiliency that most of the rest of the television industry is only now catching up to. This is true novelistic storytelling.

I mentioned the war. Deep Space Nine reaches its apex - an apex which, I might add, was considered very "un-Star Trek" by many - in a pair of seasons which deal directly with the Federation's war with a rival nation-state from the other side of the wormhole, the Dominion.

Here's why, far from being a betrayal of Star Trek, the Dominion War is perhaps the series' masterstroke: it is the ugly, real-world outcome of the kind of community building I have described above, and which Deep Space Nine was always about. Having defined and established the kind of non-partisan, socially liberal community that Deep Space Nine can be, and seen that vision through a variety of local stressors, Captain Sisko are then forced to defend it against an outside force who seek nothing less than its obliteration.

They are required, therefore, to test all of their values - established till now in the first five seasons of the show - against the reality of wartime. Within the series proper, it's a fight to survive; as drama, it is of course a fight to see if those values can, after all, endure the harshest possible pressure. The series' richest episodes are in its sixth and seventh season, as each principle and character are tested in turn - several, of course, meeting with the uncomfortable realization that we are only our best selves in the abstract, and only occasionally at the moment of truth.

I'll admit, that last part isn't very Star Trek, at least not in the emblematic manner that Gene Roddenberry originally intended for his utopian vision of our future. But here's what it is: great art, about who we are right now. And here's why it's great Star Trek, too: the characters keep trying, even with the deepest possible understanding of their failings. The future should be so lucky.

Do you feel this content is inappropriate or infringes upon your rights? Click here to report it, or see our DMCA policy.
Star TrekStar Trek: Deep Space Nine