TERRA FORMARS: Full Trailer For Miike's Violent SciFi Picture Suggests Maybe We Should Just Stay Where We Are 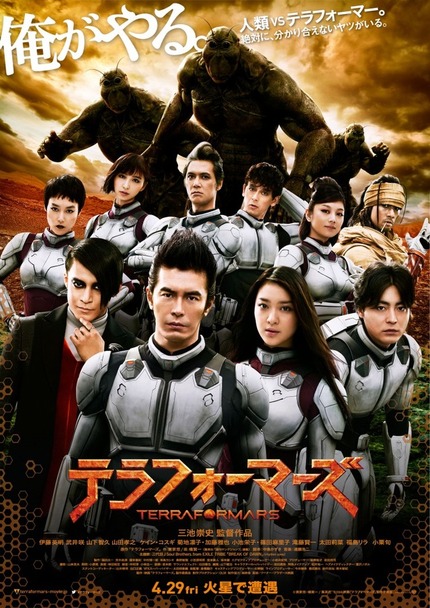 After a long build up the full trailer for Miike Takashi's big screen adaptation of popular manga and anime series Terra Formars has arrived with our first significant look at the scope of the world and the action at hand. And I would say there is reason for at least cautious optimism.

Miike stalwarts Ito Hideaki (Lesson of the Evil, 2012), Yamada Takayuki (Thirteen Assassins, 2010) and Oguri Shin (Crows Zero, 2007), and Rurouni Kenshin star Takei Emi all star in the tale of humanity returning to colonize Mars hundreds of years after leaving moss and cockroaches there to begin the terraforming process and render the planet habitable. What they discover, however, is that the cockroaches have evolved into a race of hulking and ultraviolent aliens who are not at all happy about humanity's arrival.

This is where things get dicey with the source material as the creature designs basically render the bugs as exagerrated black men with strong racial (and racist, frankly) undertones running throughout the material. Miike appears quite aware of that particular issue here and has tweaked the designs enough that while they are still true enough to the source work to not have the hardcore fanbase raise a stink they are also looking far more insect in origin than they are Scary Black Man With A Club Coming To Take Our Women.