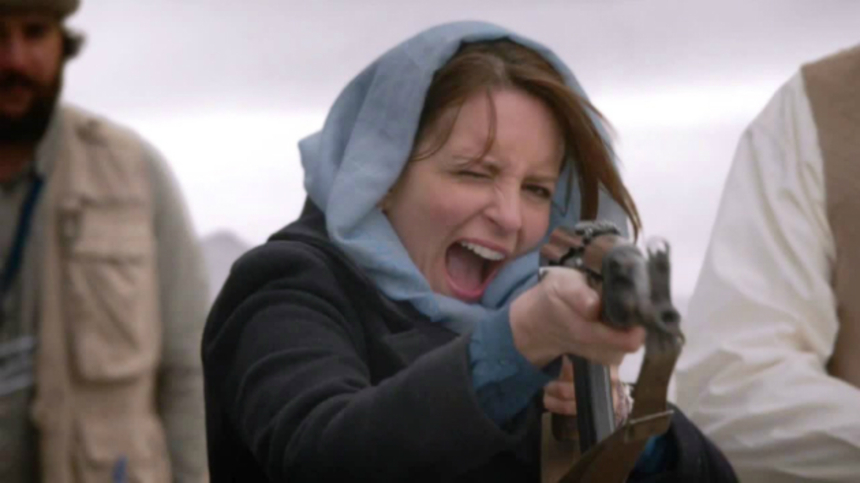 Like its title, Whiskey Tango Foxtrot doesn't make much sense at first.

Employing a common narrative device, the movie begins during a rowdy dance party in Afghanistan in 2006. As bombs explode outside, the party-goers reveal themselves to be hard-working journalists who rush to report on what they're experiencing, war-wise.

Chief among them is Kim Baker (Tina Fey), and she becomes the center of the story as it rewinds to New York City in 2003. Kim is toiling behind the scenes at a cable news network when she and other single, childless employees are implored to volunteer for war duty in the Middle East. With the barest of suggestions that her career is stuck in neutral and only a glancing thought to her romantic relationship, Kim ships out for a three-month assignment.

The film is so loosely-structured and ramshackle throughout its first hour or so that it feels like a sketch comedy show shot on location. That's not terribly surprising, since Robert Carlock wrote the screenplay, based on the nonfiction book The Taliban Shuffle: Strange Days in Afghanistan and Pakistan by Kim Barker. Carlock is a longtime collaborator with Tina Fey, dating back to their days together on Saturday Night Live and continuing onto the smart sitcom 30 Rock and other ventures.

Clearly, Carlock knows how to tailor material to fit Fey's strengths as a comic actress and, though the first half of Whiskey Tango Foxtrot is only fitfully compelling, it's filled with funny moments. The movie also benefits greatly from the wonderful novelty of tagging along as a woman takes the piss out of macho military men and throws a wrench into the expectations of jaded male journalists. Kim's transformation from a behind-the-scenes producer to a foolhardy on-camera presence develops almost imperceptibly on screen, which poses a problem for the film as a whole. Without diving any deeper into spoiler territory, it feels like a lot of story gets stuffed into the second half of the narrative, as the refreshing comic perspective is diminished in favor of more traditional wartime dramatics.

That's the usual course for comedy-dramas, but in the case of Whiskey Tango Foxtrot, it's a shame, since Fey gives such a winning and effective performance. Codirectors Glenn Ficarra and John Requa have been inconsistent in their previous films (Focus, Crazy, Stupid, Love.), though, and that remains true here. The dramatics weigh down the narrative, while at the same time the increasing pace make everything feel rushed. It's a fine line to walk, and it gets fudged here.

On the very positive side, Margot Robbie ably portrays a seasoned war correspondent, Martin Freeman nicely embodies all the expected notions of a wise and witty journalist, Billy Bob Thornton makes the most of his stern military authority figure and Christopher Abbot gives dignity to his role as a friendly fixer. On the negative side, Alfred Molina bulls his way through scenes as a government official with a very broad sense of humor.

As to the title, it's been used for Ashley Gilbertson's Whiskey Tango Foxtrot: A Photographer's Chronicle of the Iraq War (2007) and more recently David Shafer's novel Whiskey Tango Foxtrot (2014), which doesn't seem to have anything to do with war. Its meaning is adapted from the military alphabet to signify an alarming situation, as in "What the f***"!

All that proves to be a good description of the movie at hand, which is difficult to categorize yet enjoyable to experience and distinctive in its approach to wartime humor.

The film has preview screenings beginning on Thursday evening, March 3 and opens wide in theaters across North America on Friday, March 4.