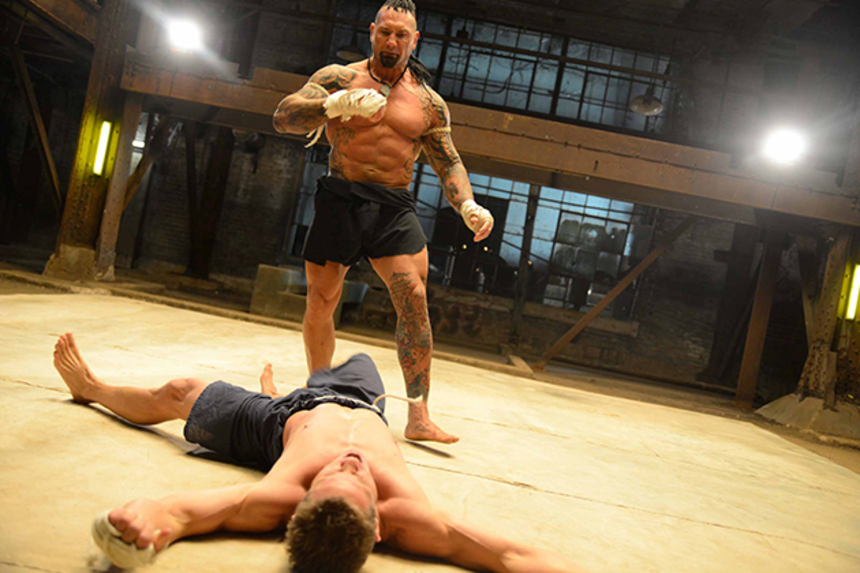 What you see above is a lumpy Mr. Bautista laying a beat down on some poor sad sack. Each of those lumps would mean certain death to us mere mortals. I imagine the same is about to happen to said sad sack down there on the floor. Welcome to Kickboxer: Vengeance.

An update to the 1989 classic film KICKBOXER, KICKBOXER: VENGEANCE follows the story of Kurt Sloane (Alain Moussi), who travels to Thailand to avenge the death of his brother at the hands of Tong Po (Dave Bautista).  Kurt trains with the legendary Master Durand (Jean-Claude Van Damme) until he is ready to take on Tong Po in a brutal fight to the death.

RLJ Entertainment have acquired the U.S. rights for the film. Though this is not a sure thing, RLJ's usual release strategy is to put an  acquired film on all digital platforms with a theatrical run then follow up with a hard copy release where we at ScreenAnarchy will get to throw some at you in a contest at a date later down the road.

“Fans of Jean Claude Van Damme have been waiting for a long time for this reboot of the Kickboxer franchise,” said Ward.  “The film delivers more action and an amazing ensemble of fighters from Dave Bautista to George St-Pierre to Cain Velasquez and Gina Carano. Fans will not be disappointed.” “There is a spectacular beauty in martial arts films that audiences have been deprived of for a significant period of time.  Making KICKBOXER: VENGEANCE has been a priority and passion of mine for several years and I’m thrilled to be able to partner with RLJ Entertainment to bring this genre back to theatres,” said producer and writer Logothetis.

Do you feel this content is inappropriate or infringes upon your rights? Click here to report it, or see our DMCA policy.
Alain MoussiCain VelasquezDave BautistaGeorges St-PierreGina CaranoJean Claude Van DammeKickboxer Vengeance