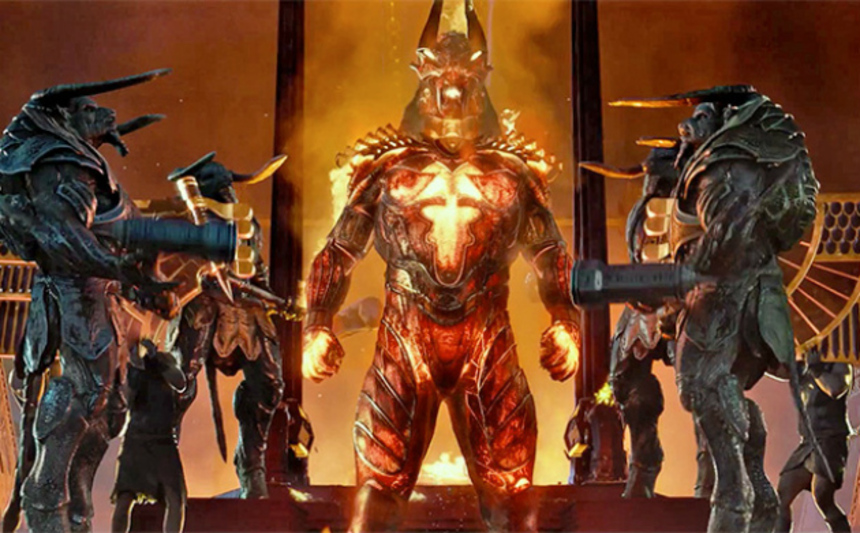 More video game than movie, the primary positive takeaway from the new digitally-driven mythology-based Gods of Egypt would have to be, as the uneducated gamers often refer to cinematic visual effects, “good graphics.” This is irritating sand in the eye for those hoping that somewhere in this overcooked onslaught of unreal bigness and loudness there might be a good old fashioned adventure yarn.

I have friends who've commonly lamented the loss of the old fashioned quest film. Harry Potter and Lord of the Rings aside, the charm of the old school low budget Italian Hercules or even Ray Harryhausen spectacles, in which a cardboard hero must venture forth and take down a string of creatures with nothing but his sword, his sandals, and his beard, has sailed into the mists of time.

Sure, movies like that were sometimes as dumb as a box of hammers, but they knew what they were, and who they were for. Hailing from an age before internet nitpicking and obsessive geek theorizing slayed much of what was fun about fandom, the idea of a loosely adapted quest adventure of yore takes us back to a time when it was okay for movies to be unabashedly cornball. Even though no one expected “state of the art” back then, there was an underlying affection apparent in the best of those films.

Far beneath the thick, thick muddy, CGI-ed to death veneer of Gods of Eygpt, there's evidence that filmmaker Alex Proyas (The Crow, Dark City) was looking to get back to this lost era, which effectively ended in 1981 with Harryhausen's feature swan song, Clash of the Titans. Like that film, Gods tells the story of ancient deities taking an interest in the affairs of morals, whose fate falls into the hands of a youthful heartthrob with questionable acting skills. But young Brenton Thwaites, who's been better in The Giver and Maleficent, is no Harry Hamlin. And, going back further, he probably couldn't grow a beard if he wanted to.

The bigger problem is that Proyas ended up emulating the wrong Clash of the Titans. That film, remade in post-Avatar 2010 as an attempted CGI-fed, 3D upgrade, proved to be such a loud eyesore that it's bested by its wanting 2012 sequel, Wrath of the Titans. Gods of Egypt looks and feels a lot like those movies, right down to its scattershot casting of hailed thespians in supporting roles.

Where the Clash remake had Liam Neeson and Ralph Finnes hamming it up as Greek gods, Proyas' film features Geoffrey Rush as the hard to kill granddaddy god, Ra. But to be fair, brilliant actors turning up to cash checks in movies like this is indeed part of that great quest movie tradition I was lamenting earlier. Look no further than Lawrence Olivier in the original Clash of the Titans. (Really…! Look no further!)

Thwaites and Rush are joined by Game of Thrones carry-over Nikolaj Coster-Waldau as the eye-patched, self-doubting protagonist Horus, the not-as-bad descendent of Ra. The bad one is Set, played by fellow sword & fantasy vet Gerard Butler (300), conquering the titular nation and driving it right into the ground, Scar style (yes, a Lion King reference). Butler, instinctively wanting to chew scenery but likely only finding green screens, defaults to a weird kind of early 1990s Stallone presence. He growls his lines in a throaty drawl, and lets his facial muscles and other muscles do the rest.

All of these actors are visibly counting the minutes until their characters transform into wicked-cool computer generated ancient Egyptian battle forms, placing the film fully in the hands of the animators, so they no longer have to do anything. Olivier, by contrast, was scarcely asked to get out of Zeus' shiny chair. All these years later, I still remember him, whereas I'm already struggling to remember what was what with Butler, Rush, and company in Proyas' film I just saw last night.

As Gods of Egypt unspooled (figuratively and narratively), I found myself mentally recalculating the ideal target age of the film's young boy demographic. As the chariot-load of Egyptian mythology and violent throne usurping gave way to a tender love story between mortals Bek (Thwaites) and Zaya (Courtney Eaton), I pegged it to be about 13.

As battle fatigue kicked in, and the most hyperkinetic aspects of Sanjay's Super Team were actualized with Egyptian gods instead of Hindu, I lowered it to 10 or 11. Finally, as the 127 minute would-be epic dragged on through its digital sand, I settled on age 8. Only boys that age would find satisfaction in the many, many forced and unfunny quips that would've been rejected by a Star Wars prequel. 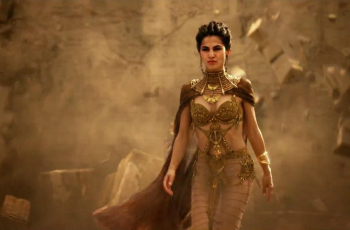 In keeping with pre-adolescent male values, in this film where every female is well endowed and in a low cut outfit (including Elodie Yung in a ridiculous get-up as the goddess Hathor), Zaya's glowing inner spirit and uncompromising faith in Horus can't compete with her large distracting breasts for being her most blatantly outstanding feature.  Following this logic, it's only when one of those perfect breasts is punctured with an arrow does the plot truly get thrust into high gear.  Not only is Egypt soiled by Set, and Zaya cast empty-handed into the gold-driven afterlife, but horror of horrors, the greatest rack in the whole movie is suddenly, tragically, gone!  Set must pay for this…!

The film's action sequences are a tussling barrage of animated animalistic glowing eyes and metallic wings. They are not the worst ever, as Proyas is at the very least a proven talent of twenty years ago. But, particularly through the dark lenses of 3D glasses, the “reality” of it all is compressed and sacrificed in favor of phony visual “depth”, a forever-swooping camera that soars over fake Egypt! And through blazing fire! And alongside weird airships pulled by birds! If nothing else, Gods of Egypt is a series of such shots. I'm told it was all done on a low budget, which despite the “good graphics,” is somehow glaringly obvious.

Notoriously stocked with nary a one Egyptian actor (Omar Sharif is dead – better call… Geoffrey Rush??) Gods of Egypt has come under fire for “whitewashing” its cast. While all the leads are indeed caucasian, and I'm in no way inclined to apologize for this movie, perhaps a more accurate observation is that this Egypt is strangely ethnically diverse. (If also diverted.) With Chadwick Boseman and Yaya Deng appearing as dark-skinned gods alongside others of Scottish and Cambodian descent, Proyas' effort can, to turn a Bill Clinton phrase, be seen as an Egypt that “looks like America.” Ummm… yeah...

As lost love and fallen Egypt are reconciled onscreen, a wickedly economic-based afterlife gives way to a works-based theology. So, no, all is not quite right in this faux-Egypt, but for extremely forgiving fans of the old quest films, and also for 8-year-old boys, Gods of Egypt might approach good. Good graphics, anyway.

Gods of Egypt opens wide theatrically in the U.S. and elsewhere Friday, February 26, 2016.