70s Rewind: THE LAST DETAIL, Jack Nicholson At His Finest 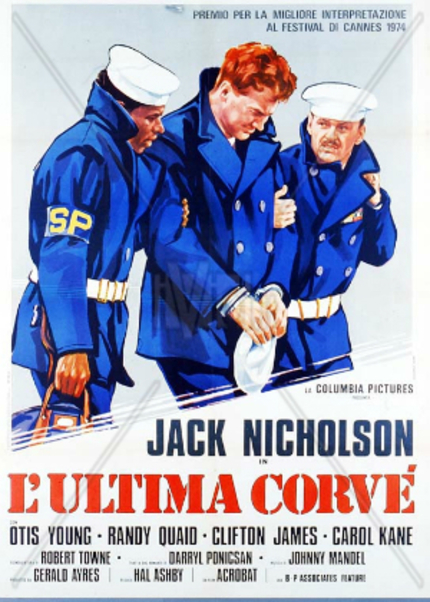 What's extraordinary about The Last Detail is how ordinary it is.

Three sailors on a road trip. In an era replete with road trips. And a time when military characters in movies were most often objects of ridicule or pity.

Yet the sailors in The Last Detail are, instead, embodied as sympathetic human beings, caught up in a system that demands their obedience. As portrayed by Jack Nicholson, Otis Young, and Randy Quaid, they are pawns in a game of chess that they do not fully understand. Buddusky (Nicholson) and Mulhall (Young), known respectively as Badass and Mule, are Navy "lifers," volunteers who keep re-enlisting in the service.

At one point, Mule mentions he's been in the Navy for 14 years. Given that the movie was released in February 1974, that means he was drafted in 1959, between U.S. involvement in Korea and Vietnam. (Elvis Presley was drafted in 1958.) By the time the Vietnam conflict escalated, he and Badass were already committed to the military. The beginning of The Last Detail finds them in Virginia as members of the shore patrol, assigned to escort Meadows (Quaid), 18, to military prison in Portsmouth, New Hampshire.

The hapless Meadows was caught attempting to steal $40 from a charity, a grave mistake because it was the favorite charity of an admiral's wife. Meadows has been sentenced to eight years imprisonment, followed by a dishonorable discharge. The sentence is manifestly unfair and unjust, but Badass and Mule don't care, initially.

Given a week to carry out their duty, they aim to hustle Meadows to prison with dispatch while keeping his per-diem expenses for themselves, allowing for a bit of holiday drinking and whoring on their way back to a prison of their own making. Their plans take a turn, however, after an ugly encounter with a racist bartender and a night spent drinking together.

Having bonded in an acceptable manner for macho straight men -- drinking in a motel room while clad only in their underwear -- Badass and Mule change their objective; now they want to show Meadows the best time of his life. According to Peter Biskind's book Easy Riders, Raging Bulls, screenwriter Robert Towne adapted Darryl Ponicsan's 1970 novel with Nicholson and Rupert Crosse in mind for the lead roles. Towne says he tussled with the studio executives at Columbia Pictures about the language: "Now that movies were opening up, this was an opportunity to write navy guys like they really talked. The head of the studio sat me down, and said, 'Bob, wouldn't twenty "motherfuckers" be more effective than forty "motherfuckers"?' I said, 'No.' This is the way people talk when you're powerless to act; they bitch."

(The film was nominated for three Academy Awards: Towne for his screenplay, and Nicholson and Quaid for their performances. When an obscenity-filled clip was played during the awards show broadcast, with the obscenities replaced by audible "bleeps," there were so many bleeps that it caused the audience to break into laughter, including Nicholson.)

Production had to wait some 18 months to begin, while Nicholson was busy with another project. Hal Ashby, still recovering from the box office failure of his second picture, Harold and Maude, had been hired as director. Rupert Crosse, who'd been diagnosed with cancer (and soon thereafter died), was replaced by Otis Young, and Haskell Wexler, who'd been slated to serve as director of photography, also had to step aside (he couldn't get a union card for the East Coast production). Ashby elevated camera operator Michael Chapman to d.p.; soon enough, Chapman would be working with Martin Scorsese on Taxi Driver.

Filming began in November 1972. After production concluded and Ashby finished editing the picture, the Columbia studio execs reportedly didn't like it all. But the film was submitted to the Cannes Film Festival, where Nicholson won an award as best actor, and The Last Detail was finally scheduled for theatrical release, first opening for a week in Los Angeles for awards consideration in December 1973, with a wider release to follow in February 1974.

As noted, the film was nominated for three Academy Awards, but it failed to win any, and whatever heat it might have had from positive critical notices did not translate into box office success. A few months later, Chinatown exploded onto the scene, featuring another collaboration between Towne and Nicholson, this time with Roman Polanski at the helm, and The Last Detail retreated into history. Nicholson would eventually nab the first of three Oscars for One Flew Over the Cuckoo's Nest, but for me, his performance in The Last Detail duels with Chinatown as his finest achievement. In his first few roles after Easy Rider, he was still tuning his acting; his emotions could flare up to the point that he was edging into caricature. In The Last Detail, he is initially asleep; he is roused quickly into a sour mood. When he breaks free of that, midway during the trip, relishing the idea of freedom, it's a marvel to see.

No matter what his character says or does, it feels like an original character, rather than a star burning brightly. On his own, Badass can be himself; when confronted by his military superiors, however, he is forced to restrain himself, tamping down his instinctual rebellion against authority.

He wants to lend the illusion of freedom to poor Meadows, yet by doing so, he is making the kid acutely aware of what he will be missing for eight long, miserable years, and it feels like a gravely mistaken kindness.

Modest through and through, The Last Detail is a character study that goes beyond its time and setting to address broader issues that remain relevant. In that sense, it's very much a timeless picture.

The film is available on a limited edition Blu-ray from Twilight Time. It looks spendid for what it is, but it is not a visual treat. The Blu-ray also includes an isolated score track and the original theatrical trailer which looks far better than anything online. A booklet is included with fine liner notes by Julie Kirgo.

Do you feel this content is inappropriate or infringes upon your rights? Click here to report it, or see our DMCA policy.
70s cinemaHal AshbyJack NicholsonOtis YoungRandy QuaidRobert Towne