IRAIVI Teaser: Tamil Up And Comer Karthik Subbaraj Is Back With His Latest 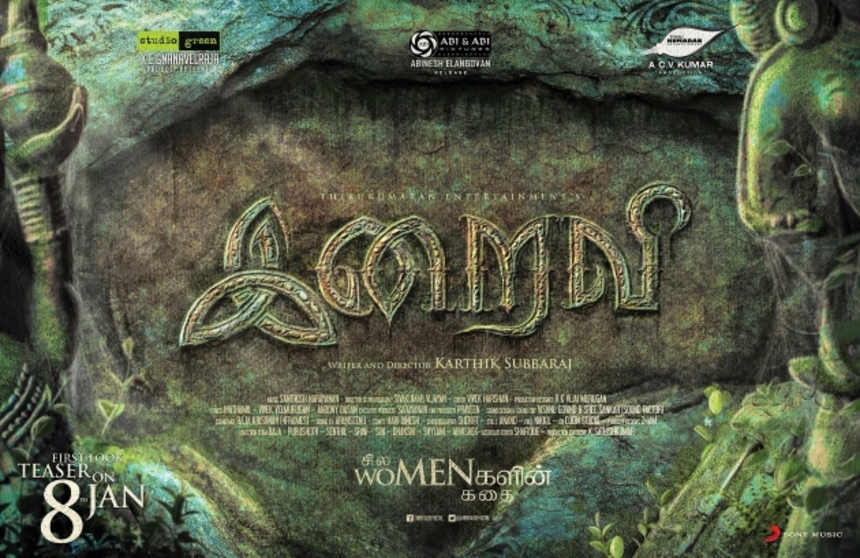 Karthik Subbaraj is ready to jump back into the limelight with the first teaser for his upcoming film Iraivi (Goddess).

Subbaraj is one of Tamil cinema's most exciting new talents and among the leaders of the current Tamil Cinema new wave. His first film, 2012's Pizza, jump started the current Tamil horror trend with a story about a pizza delivery boy, some jewels, and a cursed bungalow that made a killing at the Kollywood box office along with energizing the independent Tamil film industry. He followed that up with one of my favorite films of 2014, the meta-masterpiece Jigarthanda that manages to skewer Tamil film industry homogeneity in a fascinating and endlessly entertaining way. I'm not quite able to get a firm grasp on the thematic thrust of Iraivi yet, but it looks fascinating from here.

For this latest film Subbaraj has brought along his leading man from Pizza, Vijay Sethupathi, the scene stealing co-star of Jigarthanda, Bobby Simha, and Kollywood's favorite sidekick Karunakaran, along with a number of ladies, perhaps embodying different aspects of the titular Goddess (?). What is worth noting is Subbaraj's as of yet uncanny ability to turn relatively unknown performers in his films into major players. Sethupathi went from largely anonymous bit parts to top line talent following Pizza, and even though he's a supporting character in Jigarthanda, Bobby Simha came out smelling like roses with a few leading parts in well received films over the last year.

Also significant is the involvement of the producer who is perhaps most responsible for the current surging quality level of Tamil independent cinema, CV Kumar of Thirukumaran. Kumar was also behind both of Subbaraj's previous films as well as Nalan Kumarasamy's Soodhu Kavvum, thrillers like Thegidi, Pizza 2: Villa (supposedly a pretty damn good sequel), time travel gem Indru Netru Naalai (which landed a spot in my India top ten of 2015), and Siddharth's Ennakul Oruvan to name a few. If anyone is pushing he envelope in Tamil Nadu, CV Kumar probably helped get them moving.

No firm release plans for Iraivi just yet, but I suspect that with this first footage now public, more information can't be far behind.