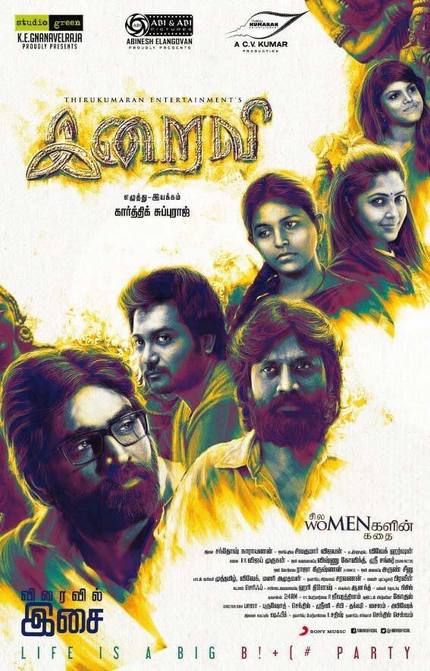 In 2012 Karthik Subbaraj blasted onto the Tamil film scene with his masterful horror thriller Pizza starring then-new kid Vijay Sethupathi. In 2014 he came back with yet another brilliant piece of cinema in Jigarthanda, a meta-meditation on the influence and prevalence of Tamil gangster cinema starring Kollywood star Siddharth and breakout star Bobby Simha. Subbaraj's latest is Iraivi, and I'll be honest, I have no idea what to expect in terms of plot or story, but he's an incredibly talented writer who utilizes misdirection better than almost anyone in the business.

Iraivi stars Vijay Sethupathi, who has become a big time movie star in the years since Pizza, and Bobby Simha, who is trying to make the best of the goodwill he earned with an amazing performance in Jigarthanda, and SJ Surya, an actor I'm afraid I'm not terribly familiar with. Opposite them, as the titular goddesses - the English translation of the Tamil title - are Anjali, Kamalinee Mukherjee, and Pooja Devariya.

Subbaraj has indicated that the film, in spite of high profile male stars, will be centered around the women in the film so I'm definitely interested to see how that plays out. If I've learned anything from his first two features, it is that Subbaraj is always ready to challenge expectations and take the audience down unexpected roads.

As of right now there is no further story information and no solid release date, but with this new extended trailer out and the music in stores, Iraivi can't be far from cinema screens. I'm excited!