Destroy All Monsters: Systems Of Control In CAROL 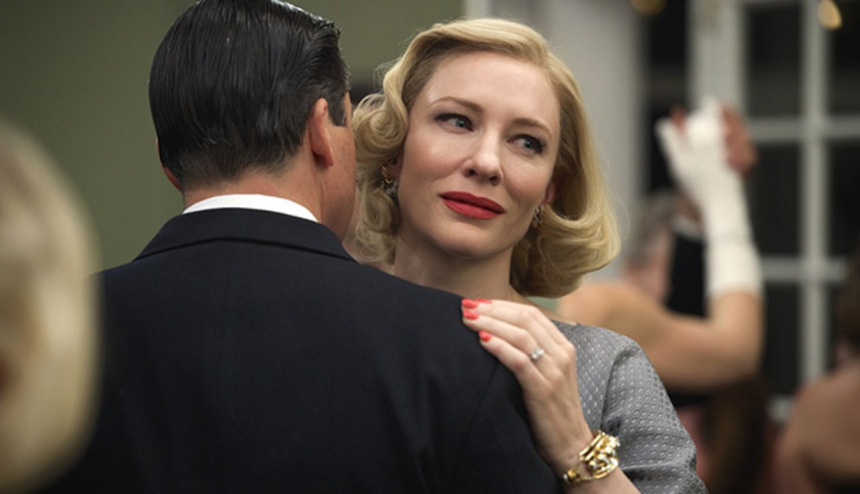 Some spoilers for Carol.

Carol is one of the best films of the year, beautifully mounted by Todd Haynes, based on Patricia Highsmith's novel. It pays close attention to the tools of its trade: framing, composition, editing, and sound choices make it as conscientious a work of cinema as Mad Max: Fury Road,

The lesbian romance at its center - between Cate Blanchett's Carol Aird, a divorcing mother of one, and Rooney Mara's Therese Belivet, a young shopgirl - has taken much of the film's acclaim. Both performances are excellent and come crackling off the screen as the women get closer and closer.

Naturally, their relationship is met with resistance in every direction, though perhaps (?) in line with the story's 1950s setting, the characters around Carol and Therese seem so unaccustomed to the very question of homosexuality among women that they scarcely know what to do about it, other than that they don't like it.

This leads to another of Carol's most marvelous aspects. The film becomes a process of watching the men around Carol and Therese forcefully, sometimes even unconsciously, attempt to control and restrain the two women - not even due to their sexual orientation, necessarily, as much as because Carol and Therese are stubbornly stepping outside the rigid, comfortable outlines of how women are expected to behave.

It's a lesson that Phyllis Nagy's exquisite script repeatedly underlines, sometimes in direct action, other times in unconscious social ticks or circumstance. We meet Therese working at a department store, where she is safely harboured behind the doll counter in the toy department; the "Dolls of All Lands," as a sign proudly proclaims.

We watch Therese carefully arrange and manicure these icons of female coding in her first full scenes in the film. (One doll cries and wets herself, we learn, but is sold out; because of course, the most popular toy for girls that Christmas would be the one that assigns mother roles upon its owner.)

Therese is much more interested in train sets, and this is how she meets Carol. She admits that she didn't care for dolls as a child but preferred trains, and knows so much about train sets now because she "probably reads too much," a conscious self-edit suggesting that Therese knows that her personal interests - in trains, or even in reading - are not terrifically ladylike.

Therese would show Carol a limited-edition train set she likes, but admits that she is confined to the doll desk. Naturally, it's Carol who will free her from this imprisonment, though it will take time - and a pair of forgotten gloves.

Other non-traditional female behaviours are proscribed throughout the film. Carol and her friend Jeanette sneak away from a Christmas party to smoke, but Jeanette conscripts Carol to keep a lookout for her husband, because he doesn't allow her to smoke. Later, Carol and Therese come across a "notion salesman," who doesn't even know what a notion is - I had to look it up - but involves the traveling sales of small products that would appeal to housewives. (Mr. Tucker proves repeatedly unable to sell Therese anything she actually asks for - photography magazines, or lipsticks.)

Therese has a lunkheaded boyfriend named Richard, the sort of ape who has figured out the whole plan for himself and Therese, and just assumes Therese is as on-board with it as he is. He pesters Therese throughout the first half of the picture about a trip to Europe that he's decided they'll take the following summer. Therese demurs openly, but Richard - bless him - is the sort of boy who immediately doubles down in the face of failure; so naturally he proposes marriage, and throws in an invite to Christmas dinner ("You're family!") to boot.

Richard calls Therese "Terry," a name she never uses for herself nor do we hear applied to her by any other character in the film. It's persistently diminutive, the kind of unconscious possessiveness that got a little further under my skin every time I heard him say it.

Once Therese starts spending time with Carol, Richard doesn't have a clear enough picture of his discomfort to outright stand up to her, but tries to gain control of the situation in other ways: asking exactly where she's going, and then implying that a town he's heard about, somewhere in the same state, is too dangerous for women to visit at night. His shots are broad and ill-informed. Richard is clearly duller than Therese, but repeatedly attempts to use a greater sense of worldliness on his part to cow his girlfriend into submission.

Richard, though, is a pale shadow of the film's primary antagonist: Carol's soon-to-be-ex-husband, Harge. (Honestly: what good could we expect from someone named Harge?)

Carol has a great deal to say about the process of going through a divorce, and the weary, frustrating negotiations between two people who have shared a life (and have a daughter) but are being forced to slowly relinquish control of one another in the process of separating. It's touching, and plays fair; neither Carol nor Harge can entirely escape the complicated web of interwoven feelings that their separation must undo.

Naturally, though, Harge is having a much harder time of it than Carol is. And notably, his every action - even his explicit use of Carol's relationship with Therese against her in court - are much less about the possibility that his wife is a lesbian, than the desperate tools of a man who will do anything to re-assign Carol to the role he would have her play.

On some level, even Harge seems to know it's futile. "I wouldn't put it past women like you," he says at one point. (Like what? A lesbian? Or simply a woman who won't merely acquiesce to his every decision?). Carol replies: "You married a woman like me." And yet for Harge, it seems, simply forcing Carol back into her box - the docile wife and mother who will come to Mom & Dad's place on weekends for brunch - will satisfy enough of his requirements that it's worth using whatever levers necessary to get them there.

Perhaps there's a knowing truth in this - that once confined to that role, Carol will behave as Harge wants her to behave out of a simple lack of many alternatives. At one point, Abby takes Harge to task on this exact point: "Your friends, your job. You spent 10 years making sure her only point of reference was you." The idea of Carol as a person free to follow her own interests and desires has not occurred to Harge in his wildest fantasies, just as Therese's rights to do the same - to become a photographer and, indeed, a lesbian - has not occurred to Richard. Both men are grandiose in complimenting the women on their looks, like handing an obeisant puppy a treat, but rankle at the notion that Carol and Therese's interior lives are bigger than the roles the men would assign them to.

Naturally, the women escape this confinement anyway. It remains as true in 2015 as it was for the original novel: Carol's brave, quietly hopeful ending is profoundly affecting, both as the conclusion to a love story of any stripe, and as a piece of queer cinema in particular.

This is perhaps best underlined by the film's most notable formal "trick." We see the same sequence twice over the course of the movie. The film opens with an acquaintance of Therese, Jack, entering a hotel bar and seeing Therese and Carol talking. He interrupts them, and they talk lightly about a party that Jack and Therese will be attending later. As the trio part for their evenings, Jack puts his hand on Therese's shoulder, because he saw Carol do it earlier; he subtly reclaims masculine superiority over the girl, before spiriting her away to the party.

When we reach the same sequence the second time, at the end of the film, we do not see it from Jack's point of view; we see it from Carol and Therese's. This is more than just the construction of elaborate tension (though it is that as well - when Jack finally interrupts the scene from off-camera, it is like hearing a pistol shot!).

It is also the freeing of Carol and Therese's story from the male point of view that has, to one extent or another, intruded upon them throughout the film until this point. This time, we see Therese react to Carol putting her hand on her shoulder; we see the long, diaphanous moment of connection, and see how trivial Jack's subsequent mimicry of the gesture is. Therese barely seems to notice.