Kudo Kankuro Rocks Out In Hell But Is TOO YOUNG TO DIE! 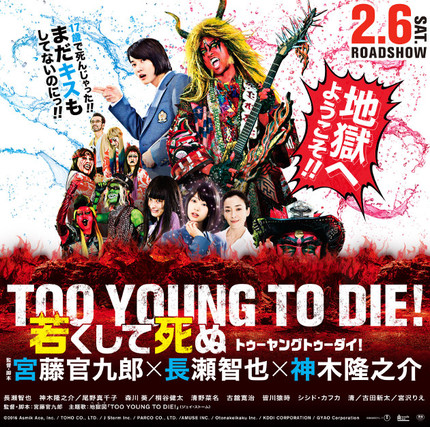 Writer-director-actor Kudo Kankuro is an enormous favorite here at ScreenAnarchy, the prodigious talent delivering a seemingly non stop string of high end oddity throughout his career. As a writer he's delivered the screenplays for cult hits Go, Ping Pong, Zebraman and others. As a performer he's worked with acclaimed directors such as Yukisada Isao and Nakashima Tetsuya. And as a director he's responsible for offbeat favorites Maruyama The Middle Schooler, Brass Knuckle Boys and Yaji & Kita: The Midnight Pilgrims. And now, after one of his frequent forays into television, Kudo returns to the big screen with musical comedy Too Young To Die.

Nagase Tomoya - one of Kudo's Yaji & Kita stars - leads a cast that also includes Miyazawa Rie (The Twilight Samurai) and Kamiki Ryunosuke (a former child actor likely best known here for supplying voices in Spirited Away, Howl's Moving Castle and Summer Wars) in a story that demonstrates that, yes, rock and roll is truly the devil's music. Literally. This looks to be typically gonzo and great, great fun. Check out the trailer below.

Do you feel this content is inappropriate or infringes upon your rights? Click here to report it, or see our DMCA policy.
comedydeviljapankankuro kudorock and rolltoo young to dietrailer

More about Too Young To Die