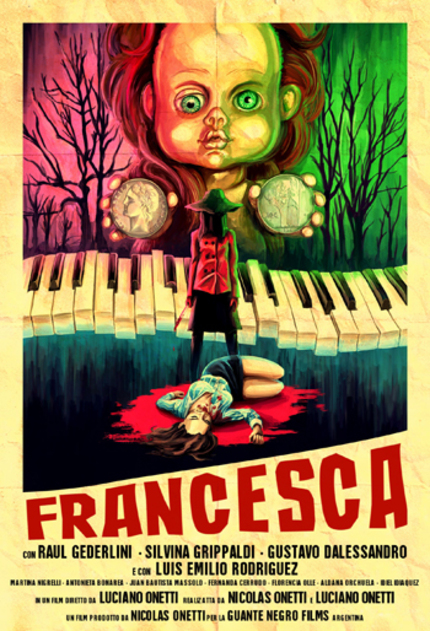 Francesca, daughter of the renowned storyteller, poet and dramatist Vittorio Visconti, disappeared 15 years ago. A psychopath, inspired by Dante's Divine Comedy, is intent on cleansing the city of "impure and damned souls". Moretti and Succo, the police detectives in charge of uncovering the mystery surrounding these "Dantesque" crimes, are in a race against time to stop these horrific killings. Has Francesca returned and why is she carrying out these heinous crimes?
Visually, Francesca is so on cue with the Giallo genre. My goodness is this film fun to look at. Francesca honestly and truly looks like it was plucked from the era. From the art direction alone - the clothes, the technology, the car, the music - the attention to detail and the efforts to make it look like it was shot on film make the whole package look so very lovely.
Luciano Onetti and Nicolas Onetti's love and admiration for the genre is clear. This is not just a love letter to Giallo cinema. That was written ages ago. The filmmakers are already bedfellows with the genre and are making sweet cinematic pillow talk with it.
What I did not get out of Francesca though was a sense of urgency, thrill or drama. For a genre which banks on this to be successful this was a wee bit of a letdown. There were two very nice surprises right at the very end of the film but the film picks a moderate pace and sticks to it for the duration. With a large portion of the film devoted to Moretti and Succo and their investigation they simply do not appear to be motivated by any sense of urgency to find and stop this killer.
Another example would be the scene of a famous pianist, known for his performance of Tchaikovsky's Francesca da Rimini, who appears later in the film. At a rehearsal he is stalked by the veiled killer. It is a very quiet and slow pursuit through the theater backstage before he meets his ghastly fate. It is not at all agonizing though nor does it provoke any fear of what is to come.
There is also less gore than I would anticipate from a Giallo film. However, I am a firm believer that the inclusion of eye trauma is a must have if you are making a Giallo film and these filmmakers do not disappoint making it both shocking and icky. Still, when it came to the murders they were over just as quickly as they began and I wish they were as vivid as the core of the film was.
I have always considered Giallo to be the more pulpy version of the cinematic thriller, that went more over the top than most other thrillers were willing to go at the height of their popularity. Francesca feels like a gentleman's approach to the genre, a sophisticated turn. I feel a more relaxed version would have been more engaging and fun. Perhaps this is a case of anticipation overcoming actualization. Is that to say that Francesca failed to live up to my expectations? It would be unfair to judge a film solely on if it met my needs. It just did not engage me the way I hoped it would.
Francesca is visually striking and beautiful to watch, but as far as an engaging thriller is concerned, it did not hit that mark that for me.
Sign-In to Vote
Tweet 0 Submit

Okay. So I just got an e-mail from the producer Nicolas Onetti following up some questions I had about their film. He explained that Francesca was an homage of early Sergio Martino giallos which did not have a lot of gore. Which means that 1. my exposure to Giallo must have been to films that came later in their hey day and 2. I have some extra homework to do. Yay! He also promises that their next film will take after those films from later in the period and have more gore in them. Also YAY!