Review: PARANORMAL ACTIVITY: THE GHOST DIMENSION, A Test Of Patience 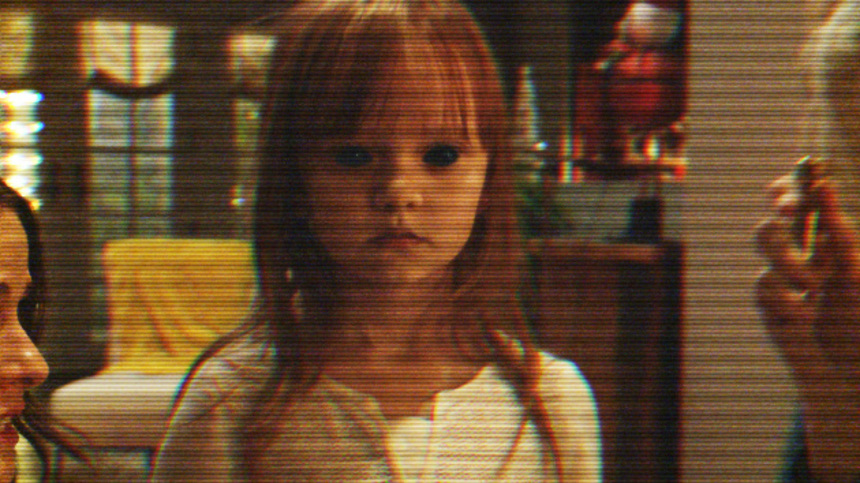 Returning to the scene of the original crime, the sixth installment in the Paranormal Activity series is the weakest yet, lacking a compelling reason to exist, beyond a desire to extend the franchise.

The previous edition, Paranormal Activity: The Marked Ones (2014), was a spinoff, heading to a working-class neighborhood in Ventura, California as a new family became plagued by supernatural forces. Paranormal Activity: The Ghost Dimension is once again set in a spacious suburban home, the one that was previously inhabited by the haunted family whose trials were detailed in the first four films.

A new family has moved in, consisting of father Ryan (Chris J. Murray), mother Emily (Brit Shaw), and 8-year-old daughter Leila (Ivy George). Ryan's younger brother Mike (Dan Gill) shows up for a visit, and family friend Skyler (Olivia Taylor Dudley) is also staying in the house. Ryan and Mike discover an old video camera, circa 1988, in the garage, along with a box of old videotapes. The tapes reveal franchise stalwarts Katie and Kristi, two little girls who are introduced to paranormal activity via an instructor and the ghostly (and unseen) Toby. For reasons that have never been apparent in any of the previous movies, the video camera captures "spirit photography," which gives the filmmakers license to present much of the footage as though it were shot by the 1988 camera, lined views and fuzzy colors included. Add to that, the screening I attended was in 3D! Add to that, nearly the entire movie is shot as though it were found footage! Thus, we have the worst-looking 3D movie I have seen since 1983's Jaws 3-D

The spinoff trashed the static shots and gentle moving pans that helped make the first and third films in the series so much more effective than the second and fourth editions, and The Ghost Dimension continues with that aesthetic decision under the direction of Gregory Plotkin, a veteran film editor who worked on the second through fifth installments of the series and is here making his feature debut.

He doesn't have much to work with in order to create an effective horror movie, much less a suspense thriller. The screenplay, credited to multiple hands, structures the story in a routine fashion that doesn't build interest or shed much new light on the mythos of the series.

Sure, there are a couple of wrinkles on what's been done before, but beyond the 3D and the intentionally poor visual presentation, Paranormal Activity: The Ghost Dimension depends almost entirely on jump scares in which the camera shoves to black, accompanied by loud noises. If this is indeed the final installment in the series, as has been promised, it's going out with a whimper rather than a bang.

The film opens in theaters throughout the U.S. on Friday, October 23.

More about Paranormal Activity The Marked Ones