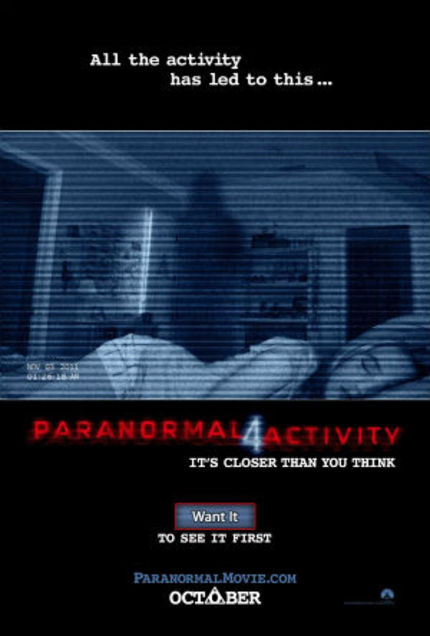 Give the Paranormal Activity people some credit. They've made three sequels now to what was initially a standalone, not-meant-to-be-a-franchise horror film, and they've done it without becoming a laughable parody of themselves. They've expanded the story in ways that largely make sense. The movies have only gradually diminished in quality, too -- unlike most series, which may start strong but are complete disasters by the time you get to Part 4.

That being said, Paranormal Activity 4 is certainly the weakest of the bunch. The jump-scares that are the franchise's hallmarks are a little less potent, the suspense not quite as high, the payoff not nearly as chilling. Is some of this due to a perhaps unavoidable over-familiarity? Is it unfair to expect your fourth Crunchwrap Supreme to taste as good as the first one did? Probably. But the story in PA 4 is disappointingly incoherent, a problem its predecessors did not have.

The action is set five years after the events of PA 2, which ended with Katie (Katie Featherston) killing her sister's family and making off with her baby nephew, Hunter. Their whereabouts are unknown, says the title card, though we suspect that's about to change. In Henderson, Nev., 15-year-old Alex (Kathryn Newton) and her little brother, Wyatt (Aiden Lovekamp), are bemused by the boy across the street, Robbie (Brady Allen), who behaves in standard Creepy Kid fashion, with the staring at walls and the talking to unseen friends and the showing up in the middle of the night and what have you. When Robbie's mother is hospitalized, he comes to stay with Alex's family, whereupon spooky things start happening.

Alex and her nice, parent-approved boyfriend, Ben (Matt Shively), are the only ones who notice the strange events, of course; Alex's mother (Alexondra Lee) and father (Stephen Dunham) either don't see them or dismiss them, and Wyatt is ... well, Wyatt is 6, just like Robbie. Six-year-olds have a different threshold for "strange." Inspired by a late-night Skype session during which Ben sees an odd shadow pass behind Alex, they rig all the Macbooks in the house -- there are many Macbooks in the house -- to film everything, all the time. Alex also films quite a bit with her iPhone, like the kids do nowadays.

In other words, it's the usual pattern: things go bump in the night, so the characters set up cameras to document what those things are. Directors Henry Joost and Ariel Schulman and screenwriter Christopher Landon, all returning from PA 3 don't bring anything new to the series in that regard -- nor would audiences want them to. Tweak the structure and format too much and it stops being a Paranormal Activity movie.

But significantly less effort is made this time to justify why people are carrying cameras around. Alex and Ben aren't amateur filmmakers or anything like that; they just film every mundane thing they do. And as for using Macbooks as surveillance cameras, that's a neat workaround -- it's not like Alex can mount security cams in the ceiling -- but it relies on no one in the family ever closing their laptops (or taking them out of the house, or turning them off).

There are a few creative touches, though. The motion sensors on an Xbox Kinect play a crucial role, producing admirably goosebump-y results. Introducing a Creepy Kid into the mix also helps, and it allows for an homage to The Shining, which is rarely a bad thing. Newton and Shively play likable teens (unusual in itself), and the boys are authentic and unprecocious.

Too bad it nearly falls apart in the end, undone by what must have been poor editing choices. Major elements of the plot go unexplained or unresolved, as if scenes are missing. There is ambiguity in places where the filmmakers obviously intended for there to be clarity. The ride is enjoyable enough, but it's hard to be satisfied by the destination when you're not sure how you got there, or even where "there" is. Each of these three sequels was produced quickly, but this is the first one that felt rushed.

Paranormal Activity 4 is now playing wide across the U.S. and Canada. Check local listings for theaters and showtimes.

My wife and i love these films, but we refuse to watch them in theaters. We both feel they are much more effective watching them at home with all the lights out. PA3 left us wanting a bit more from the story, we felt it didn't tie in to the story they set up in the first two...at least not the way they ended it. PA is a much more interesting Halloween franchise than SAW was, i will give it that much.