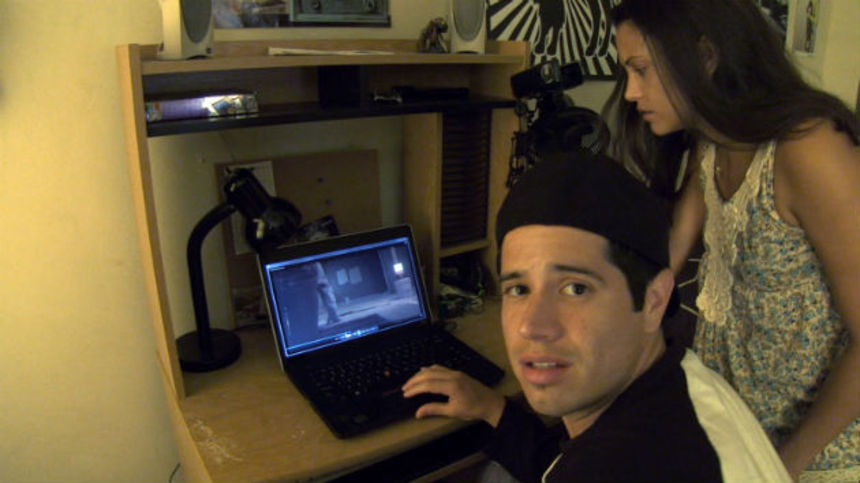 The fifth entrant in the Paranormal Activity found-footage series picks up its home video cameras, moves to a new location, and introduces a new set of characters with the same old problem: How do you make a movie about things that go bump in the night a compelling experience for audiences that have already seen all your old tricks?

The makers of this film decided to approach the story from a different cultural perspective. Officially titled Paranormal Activity: The Marked Ones, I think it's fair to call it PA: Cuatro y Medio, reflecting its setting in a working-class Latino neighborhood in Oxnard, California. Rather than the spacious suburban dwellings depicted in the first four films, the action takes place largely in two apartments in a small but typical two-story complex. On the second floor, Jesse (Andrew Jacobs) lives with his sister Marisol (Gabrielle Walsh), and their grandmother. Jesse has just graduated from high school and received a video camera as a present, which is the only justification the film needs for everything to be presented from a (very) shaky-cam point of view.

Jesse and his best friend Hector (Jorge Diaz) hear strange sounds coming from an apartment on the ground floor, prompting them to snake a camera down through the ventilation ducts in time to catch a glimpse of a naked woman being painted with an odd symbol (a triangle inside a circle) on her belly. Anna (Gloria Sandoval), the woman who lives there, has long been suspected of being a bruja, or witch, but her subsequent murder, apparently at the hands of her son, Jesse and Hector's schoolmate Oscar (Carlos Pratts), catches everyone off-guard, especially when Oscar ends up dead as well.

Curiosity leads Jesse and Hector to sneak into the dark apartment, leading to Jesse becoming one of the titular "marked ones." He begins acting strangely and then, well, the "paranormal activity" part of the title becomes manifest, and it's off to the races, so to speak, except that the action is doled out in a haphazard manner, with the story stumbling forward like a drunk in search of the floor. 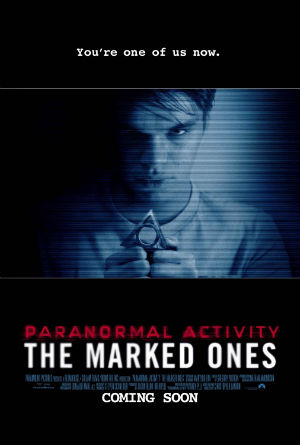 The screenplay is credited to Christopher Landon, who also wrote the previous three installments and directs this one as well. His scripts have been more interested in fleshing out the demonic mythology conjured up by the original film's writer/director, Oren Peli, then in spending much time tending to the characters. That's fine if the picture builds tension over the course of its running time or at least depicts unexpected moments of fright, the more sustained, the better.

For my money, the first film and Paranormal Activity 3 did that very effectively, while the second and fourth installments fell down badly, the latter resorting to a series of cheap fake scares. This time out, Landon adds welcome, intentional levity to early scenes, and eliminates the knee-jerk, "boo!" cheats. And the decision to explore a Latino environment -- complete with snatches of conversations in Spanish without subtitles -- is a good one, though the story falls back on less-welcome cultural stereotypes in search of a good scare. (Admittedly, as a person of half-Mexican descent, I'm a bit more sensitive about such things.)

Yet Landon also jettisons the aesthetic of a still, observational camera, which initially set the franchise apart from other found-footage movies. Often, the insistence on "amateur-style" found-footage means that the camera waves around for no good purpose, which is not only annoying but also serves to undermine any tension that might otherwise have developed.

By the time the ending rolls around, veteran viewers of the first four films will either appreciate the multiple nods in their direction or roll their eyes in disbelief. I'm afraid that I broke into laughter at its narrative contortions. While I appreciated the attempt to reach out to Latino audiences and explore new territory, the film gets lost in its own mythology and is unable to stand on its own, failing to generate any suspense, much less horror.

The film opens in wide release across North America on Friday, January 3, 2014. Visit the official site for more information.

More about Paranormal Activity The Marked Ones