MARVEL'S JESSICA JONES Trailer: This One Ain't About Heroes 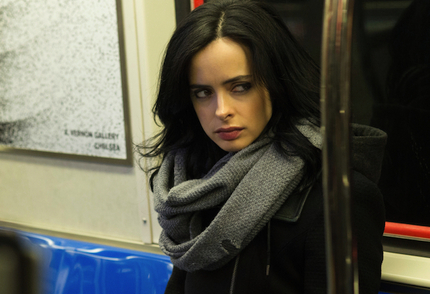 After the success of Daredevil, Jessica Jones is the next offering from Marvel and Netflix in their "street-level" hero roster of shows.

Premiering November 20 across all regions with Netflix, the show stars Krysten Ridder as a private investigator who was once a super powered hero. When an old nemesis (that'd be David Tennant as the mind-control master The Purple Man) returns to terrorize a new set of victims and taunt the clearly PTSD afflicted Jones, she and her new ally Luke Cage (Mike Colter) attempt to track the baddie down. While there's clearly a heroic line running throughout this narrative, there's something far more broken and dark about this one, which, as someone who has never read an Alias/Jessica Jones comic, makes me intrigued -- just what are the ramifications of being a hero?

Daredevil had some major bumps to get over, but I still found it to be the overall best thing the MCU has cooked up thus far, mainly because the long form show format really benefits characters and stories that come from the similarly formatted comics. So while Jessica Jones doesn't look like groundbreaking television in anyway (as with Daredevil the show's aesthetic is The Wire Lite) I am drawn by the casting of Ritter and Tennant and the promise of a good pulpy game of cat and mouse with super powers. How about you? Sound off in the comments below!

Do you feel this content is inappropriate or infringes upon your rights? Click here to report it, or see our DMCA policy.
david tennantjessica joneskrysten ritterluke cagemarvel's jessica jonesmike colternetflixthe purple man