70s Rewind: FROM BEYOND THE GRAVE, In Praise Of Modest Frights 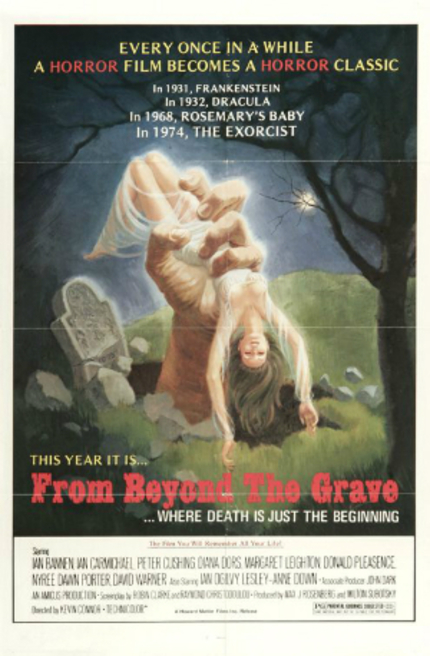 As a huge fan of 1970s cinema, it's always tempting to overpraise modestly entertaining movies. For comparison's sake to another decade, witness last week's effusive nostalgia for 1985's Back to the Future II, surely one of the most ghastly, sour sequels of the modern era, yet a movie that still holds a special place in many hearts.

From a modern perspective, then, 1974's From Beyond the Grave must be acknowledged as a fairly routine anthology, a sufficiently-restrained horror movie that earned a PG-rating when it was finally released in the United States in November 1975, more than 20 months after it debuted in London. All things considered, though, it deserves attention today because its charms hold up well, especially for viewers who do not require their horror movies to be filled with explicit gore, racing by at the speed of light.

It's an anthology film, consisting of four episodes about shoppers at a gift shop run by Peter Cushing. Each shopper seeks to cheat Mr. Cushing in some manner, and each receives a degree of retribution. Cushing, of course, need do little more than crook an eyebrow to indicate his awareness of his shopper's intentions, which sets the tone for the movie as a whole. All four tales are adapted from stories by R. Chetwynd-Hayes, whose original fiction I've not read, but they offer a good cross-range of approaches to horror.

David Warner kicks things off by purchasing an ancient mirror that proves to have a secret inhabitant inside. (Not such a bargain, it turns out.) Warner has a friendly get-together with friends and one of them suggests a seance, which appears to bring the mirror's inhabitant to life. So, you know, beware of mirrors and seances.

Donald Pleasance anchors the next episode as a former military man, now a street merchant selling pencils and shoe laces. He attracts the pity of Ian Bannen, who is a middle-management office worker stuck in a loveless marriage to the frustrated and shrewish Diana Dors. Bannen pretends to be a former military officer to Pleasance, chiefly to make himself feel better about his own situation, and goes so far as to steal a military medal from Cushing's shop to prove it. Pleasance invites Bannen home for a little hospitality, and also to meet his daughter (played by the actor's own daughter, Angela Pleasance). Things turn seriously horrible from there.

The third story lightens the mood, as a cheap businessman (Ian Carmichael) thinks he has pulled one over on Cushing by switching the prices on a snuff box. Of course, he has gotten away with nothing, and soon finds himself plagued by a powerful spirit force called an "Elemental." Despite the subject matter, it's handled deftly as a comic interlude.

Writer Ian Ogilvy purchases an ancient, beautifully ornate door in the final episode, installing it in his home to replace an ordinary cupboard door. His wife (Lesley-Anne Down, looking spectacularly lovely) doesn't quite see the appeal. But then the writer discovers that the door can open up a new, hidden world, one that holds terrible danger. Roger Ebert captured the spirit of the venture in his review, originally published in 1975, first identifying the movie as "the latest of some 30 films produced by those indefatigable masters of horror, Max J. Rosenberg and Milton Subotsky. The names Rosenberg and Subotsky may not be on every tongue, but among horror fans they're a brand name. Their credits include The House that Dripped Blood, The Vault of Horror and Tales from the Crypt."

Both from the United States, Rosenberg and Subotsky formed Amicus Productions in Britain in 1962, enjoying success with their first horror anthology, 1965's Dr. Terror's House of Horrors, featuring Peter Cushing and Christopher Lee, and directed by Freddie Francis. From Beyond the Grave proved to be the company's final anthology, its last film being 1977's The People That Time Forgot.

Director Kevin Connor began as a sound editor before becoming a film editor, earning early credits including Oh! What a Lovely War (1969). He made his directorial debut with From Beyond the Grave and helmed the final three movies for Amicus. After that, he directed a few more features -- most notably 1980's trashy Motel Hell -- before transitioning into television, accumulating dozens of credits down to this day.

From Beyond the Grave remains an enjoyable film, well worth every one of its 97 or so minutes. In the U.S., it's available to watch via the Warner Archive streaming service, and is also available on Region 1 DVD.

70s Rewind is an occasional series on movies released during the writer's favorite movie decade.