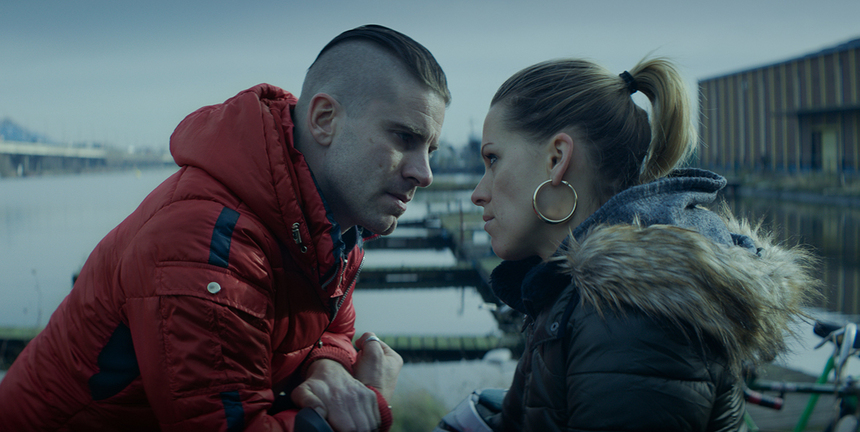 A man crashes into water and hauls himself to the side, heavy breathing puffing through his nylon mask as he throws himself into the waiting car. "Just drive," he wheezes to the waiting driving. "There was nothing I could do." Meet Dave and Sylvie, both of them working class folk clearly at the tail end of a criminal endeavor gone wrong. Missing from the picture is Kenny - Dave's brother and Sylvie's boyfriend - and he shall remain missing for the next four years, time spent in a cell as he serves time for the trio's crime while sheltering his brother and the woman who has sworn to wait for him.

But when Kenny comes out everything has changed. Sylvie is two years sober, for one thing, and Dave going on three as he ekes out a nondescript life working as a mechanic in a car wash. It's bland and predictable and exactly what they want. For what Kenny has no inkling of is that Sylvie is now pregnant with Dave's baby and nobody has any idea what the response will be when Kenny finds out.

So begins Robin Pront's The Ardennes, a film that begins as old guard Belgian social drama before steadily escalating into the most recent example of the steadily rising tide of stellar new guard crime dramas spilling from the country, a sort of natural next step from pictures like Bullhead. It's a film that anchors itself in the mundane reality of its very true to life characters, then pushes those characters to extremes that continually surprise while still feeling remarkably truthful and even inevitable in the face of Kenny's rash temper and remarkable facility for making bad decisions.

Like Bullhead before it Pront's The Ardennes is, in many ways, an exploration of the darker sides of masculinity, of loyalty, family, the need to provide strength and shelter, and the tragic consequences that follow when when strength falters and the bonds of loyalty snap. Jeroen Perceval and Kevin Janssens both deliver remarkable performances as Dave and Kenny, respectively, with Pront showing a remarkably assured hand in his feature debut, the director deftly handling both the complex emotional layers of his characters and the increasingly demanding visual challenges of his slow descent into violence. Straddling the line between arthouse and genre The Ardennes is a very strong debut sure to challenge and reward fans on both sides of that divide.