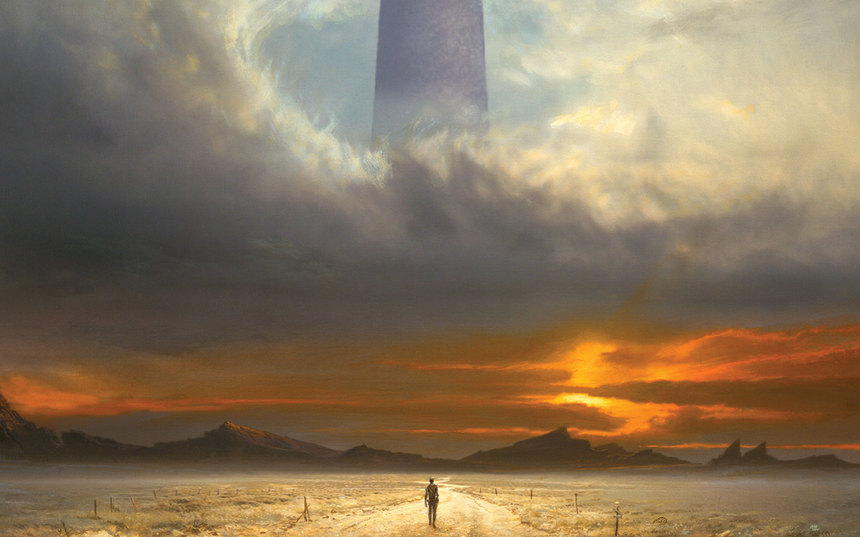 "The man in Black fled across the Desert, and the Gunslinger followed."

So begins Stephen King's Dark Tower saga -- his seven-book, 30-year magnum opus -- which is actually, finally! miraculously?... inevitably, coming to film. And TV.
Sony has announced that The Dark Tower is slated for January 13, 2017. Incidentally, they also announced not one, but two Bad Boys sequels; the first Bad Boys is one of my very favorite movies. But I digress from the awesomeness at hand!
The Dark Tower series is an astonishingly diverse and rich universe, with scenes and scenery and scene-chewing characters that just seem written for cinema. The story knows few boundaries, embracing a plethora of genres (by turns Western, horror, sci-fi, fantasy, family, adventure, and more), dancing between universes, time, fiction, and reality, and delivering an unrelentingly original palette of languages and ideas. It is violent, distressing, rapturous, and transcendent, and listening to this series on audiotape was one of the best movies I ever saw.
We've known for some time now that Sony wants to turn the seven books into multiple films, interspersed with TV series. The most likely candidate for a TV show is the fourth book, Wizard And Glass, but judging from the generic title on the slate it would seem not even Sony knows what their plans are just yet. The first book is called The Gunslinger, and The Dark Tower actually refers to both the entire series and just the final book. Sony refers to the release simply as The Dark Tower, which suggests they may not yet be sure how many books the first film will encompass.
There is more good news. At least the first film of the adaptation will be directed by Nikolaj Arcel, a Dane who won Best Director at the Danish Film Academy Awards for his debut political thriller, King's Game; wrote the original adaptation of The Girl With The Dragon Tattoo; and directed A Royal Affair, which was nominated for Best Foreign Language Film at the Academy Awards. The latter film was an international success, and Arcel subsequently moved to Hollywood, where he scored this dream gig.
There are no actors attached at present, though adaptations have enticed some interesting names in the course of this series's decadal journey to the screen. Javier Bardem was once on board to play the titular Gunslinger, Roland Deschain, back when Ron Howard was trying his hand at ABC (Howard is still on as a producer). I certainly wouldn't complain if Bardem were cast, but I think Viggo Mortensen is the man I'd choose. There is a veritable glut of amazing roles to fill here, though, and we're going to see some obscure names turned into household ones if they can successfully bring these challenging characters to life.
This will be a very challenging adaptation, despite the inherently cinematic universe. These books do not shy from dark content -- this is Stephen King, after all -- and attempts to dilute those elements of the books will not sit well with fans. The books are rewarding precisely because the books are difficult. Arcel's adaptation of The Girl With The Dragon Tattoo shows he does not shy from dark matters either; I hope Sony gives him the room he needs.
Now, we wait.
Tweet Post Submit

Do you feel this content is inappropriate or infringes upon your rights? Click here to report it, or see our DMCA policy.
Nikolaj ArcelSonyStephen KingThe Dark Tower