Review: THE DARK TOWER, The Adaptation We Neither Wanted nor Needed 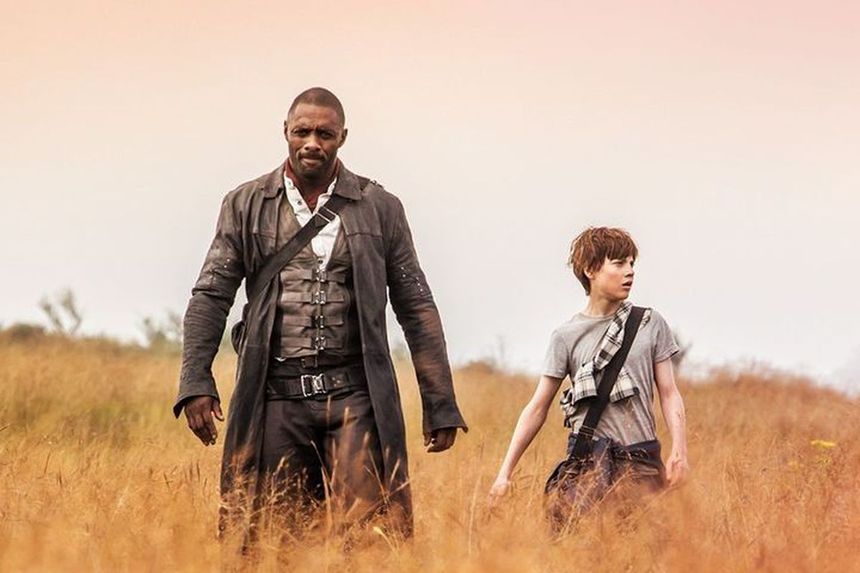 Books, comics, and graphic novels have been ripe fodder for movies for decades. And the question always remains of how well a book can be adapted to film, considering the difference in the mediums. It should be more accurate to say that stories from books can be adapted; they can be brough to life on screen, interpreted, of course, by director and producers, but can be faithful either in story, characters, tone, or all. Some can vary wildly from the source (see both adaptations of Solaris) while some remain faithful, even if they leave a lot out (see The Lord of the Rings trilogy).

The Dark Tower is arguably Stephen King's opus, his eight book series about gunslinger Roland, his companions from Earth, and their quest to save the Dark Tower (and thereby the universe) from the Man in Black. I've read the entire series four times, and some of the individual books many more. Apparently, King himself approves of the fim adaptation of some part of the story.

Given how loosely parts of the epic tale have been pulled together, the plot is fairly succienct. A young boy named Jake (Tom Taylor), in modern day New York, has visions of a Gunslinger (Idris Elba), a Man in Black (Matthew McConaughey), and a group of children whose brain power is being used to knock down a tower that, it turns out, holds the universe together. Turns out, Jake has incredible psychic powers, everything he dreams is real, and he escapes those who would capture him for said Man in Black (or Walter) and finds the Gunslinger (Roland), who will cross over between his own Midworld and New York to stop Walter's evil plan.

For those who are unfamiliar:

It could be worse. There are a few decent action scenes, good performances from Elba and McConaughey, and some pretty cool CGI effects in key scenes. The story makes sense, for the most part. At least, you will eventually be told how it all fits together. And Roland's fish-out-of-water moments in New York are mildly amusing. But it feels sewn without much attention to cohesion, and the symbolism doesn't really stand out, such as it is. Everything feels a bit too rushed, and you don't get to spend enough time with the characters to care about them or dislike them enough to care who lives or dies. There is little excitement, even in the stronger action scenes, and even Walter's sorcery offers little in the way of 'magic'. It's ninety-odds minutes of dull.

For those who are familiar with the saga:

I spent a third of this film groaning, another third rolling my eyes, and the final third trying not to fall asleep. The screenplay is as if someone tried to explain the plot of all the books to the writers in about 10 minutes, they made the odd note such as "people with animal heads", "he can do magic", "there are beams", and cobbled together a story that barely holds together. This isn't even the greatest hits of The Dark Tower series; all the majesty is gone, all the weird surrealism, all the mix of sci and western reduced to low background noise.

Elba is decent enough; put him in the television series of the show and he would do fine work exploring the depths of Roland's pain, masochism, and introspection. Taylor, even though he is technically the lead, is given little to work with, and is pretty much forgettable. But as I suspected, McConaughey is not up to the task; sure, he can exude the evil asshole vibe; but Walter is the devil incarnate, the evil that spreads across all time and worlds, and McConaughey doesn't have that ageless evil about him (A good punch to the nuts would sort McConaughey's Walter out).

Honestly, it's not even worth name-checking director, screenwriters and producers, since it seems no one's heart was in this, and they must have just been showing up for the paycheck. They did what they were paid to do, but that's about it.

The Dark Tower isn't even bad enough to be angry about; it's just, boring, and quite frankly, forgettable. I feel bad that Elba might not get a chance to shine as he should. But there is a television adaptation, which the saga deserves to fully explore the world and metanarrative that King has crafted. With a different team behind it, it could go well. If this film was terrible, it could spell doom. As it is, a decent show will wash this mistake clean away.