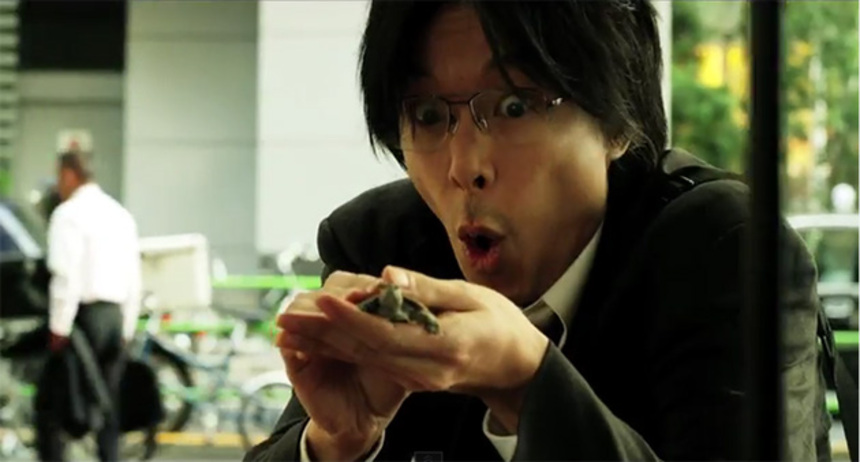 It's fair to say my appreciation for the films of Sono Sion runs hot and cold. I was hot on Cold Fish, a near perfect blend of raw, visceral violence both emotional and physical, all told through a narrative structure that's glacial while being supremely compelling. Himizu, on the other hand, I found tedious and silly, and had a memorable TIFF spent arguing this fact with Gareth Evans about the quality of the work (he loved it). Last year's Tokyo Tribe was for me an abomination - treacly tunes, a rape-y narrative barely passing for a storyline that took facets of West Side Story and made them dull and ridiculous. It may be a bit of fun, but screened at Midnight it was deadly.

It's undeniable that his output is prolific (he's got six films in 2015), and by shotgunning out these tales one or more might find their mark. For me, Love & Peace is number one with a bullet.

First of all, the word "delightful" isn't oft used to describe a Sono film, but the magic of this particular work is that it balances beautifully between the poles of sheer weirdness and warm, fuzzy moments. This is about as close at Sono's going to get to doing a Disney movie, and it's all the better for it.

A rags-to-riches musical with Kaiju turtles, the film is as catchy as the pop tunes the lead character and his amphibian friend churn out. Sono's trademark batshit weirdness is definitely on display, but it's channeled into a fable structure rather than a more morbid morality play. In some ways there are echoes of Guillermo Del Toro here, the collision between the childlike and the adult providing both narrative drive and drama.

For me a huge part of the enjoyment of any musical is, well, the music. And where the shitty rapping of Tribe wore thin pretty damn quick, the bubblegum pop of Love & Peace is perfectly in keeping with the tone of the flick. You might never have thought Sono would make a toe-tapping piece of entertainment, but here we are.

Japanese comedies like this are often extremely broad, but to the film's credit there remains a fair share of subtlety at work here. Yes the lead character is archetypical, contorting his face in awkwardness in order to emphasise the rise to coolness. Hasegawa Hiroki returns to working with Sono and provides the heart of the story with a mix of the silly and the somber.

The turtle is pretty magnificent, as is the motley crew of animated toys and animals scurrying through an underground layer. At times the film veers into truly dark territory (I wasn't sure how the Jamestown-style events were going to play out), and these kinds of surprises make for a really engaging experience. Throw in some rampaging Kaiju destroying downtown Tokyo and you have Sono's most cathartic film to date.

The show of Love & Peace is that it's both coherent, entertaining, and still contains much of what his darkest genre fans like about his work. It's a superficially silly film that you could show your kids, but it remains more dark and insane than anything else they've likely seen from any other filmmaker.

I loved Love & Peace, and think it may well be Sono's most unabashedly entertaining, and thus perhaps his most successful film. It's ambitious and silly, perfectly blending the surreal with the saccharine to create something that's simply a joy to watch.