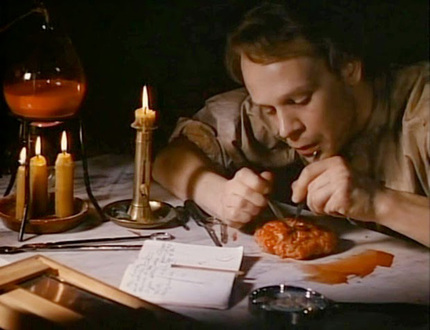 You ever look at the back of those discs you used to buy and wonder who'd waste their time on those special features? Well, I'm that guy, that person who delves whole hog into the making ofs, the behind-the-scenes shots, and, above all, the director's commentaries.

The first one ever is on Criterion's LaserDisc of King Kong and it's pretty adorable [a brief excerpt here]. The first few minutes are spent explaining this seemingly mystical thing - an additional audio track on a film! - with the commenter in question (in this case the film historian Ronald Haver) patiently explaining the process of his "lecture track".

In the heyday of LaserDiscs and early days of DVD we were getting some sublime tracks - think Terry Gilliam on Brazil, or the fine work that Roger Ebert did on Citizen Kane. One favourite is the track for The Last Waltz, a multi-participant affair where Irwin Winkler shows up briefly to say that Scorsese left the set of New York New York to go off and do this film, he remains annoyed with his collaborator, and he's never seen the film out of anger.

There are those like Steven Spielberg and Woody Allen who refuse to do commentaries, and others like Peter Jackson that stacked five (!) of them on each extended Lord of the Rings film. Kevin Smith was known for his drunken party atmosphere. Then there are the Coen Brothers, who with their release of Blood Simple did something that at the time was both revolutionary and completely riveting - they had a commentary that was full of lies.

A fictional Kenneth Loring tells tales of production that are simply made up, and part of its charm is its incessancy. You've got a perfectly excellent film going on in the background while someone drones on about how the cars were filmed upside down in order to have the rain look a certain way. It's amusing within the context of the Coen's work, it's a fun little trifle at home, and I'm betting I'm one of only a few that stomached the whole thing.

So, now we have a theatrical presentation of Director's Commentary: Terror Of Frankenstein. The shtick, such as it is, is that collectively we're watching a disc. The intro even has an early-90s looking menu screen, with the cursor selecting the commentary for us to go through the film.

The movie in question is a Frankenstein film made in 1977 by Calvin Floyd, starring Leon Vitali, Per Oscarsson, Stacy Dorning and Nicholas Clay. The commentary makes it out to be that one of the cast has recently been executed for the brutal and systematic murder of the film's participants, and the director is now cashing in on some of the notoriety.

For the first few minutes of the running time the film plays well - unlike with Blood Simple it's not such a crime to delve into the commentary first, as this truly is an egregious telling of Shelley's tale. There's a metatextual playfulness at work, asking us to think about what we're seeing in different ways, becoming obsessed by pedestrian elements like suitcases, or swayed that a given performance is and exemplary indication of "the method" and thus worthy of praise.

Unfortunately, this is one of those ideas that quickly runs out of steam. While the surrealism used in the Coens' version built and built, it never truly became the stuff of broad farce. In the case of this film, there's little to keep things going without it feeling like a joke worn very thin indeed. When the pieces do fit together it all feels more than a bit silly, made worse, again, by the fact that the film we're suffering through has no charms of its own.

Put together by some of the team behind Room 237, one can appreciate their desire to deconstruct our deconstruction of films via commentary. I get that it's a knowing love letter to these discussions that used to be commonplace on our releases, not all living up to the standards we'd like. Mel Brooks, for example, is a genius filmmaker, and a preposterously hopeless commentator.

We've got here home entertainment remixed into a theatrical form, recontextualized into a new narrative that in ostensible ways manages to rewrite the text that it's discussing. I laud the effort, and I think it's a fun and provocative idea. I just don't think it's done particularly well, I don't think the underlying "story" that gets rewritten is particularly interesting, and I don't think many will get much out of it save for a few chuckles.

So we've got an interesting critical conundrum her e - do we judge the film that the commentary is based on? Do we judge the metafilm that exists in the diagesis crafted through commentary? Or do we, as most do with their shinydiscs, think that Director's Commentary is a feature worth skipping? Despite some good intentions by the filmmakers, both in '77 and now, I fear that most will metaphorically eject the disc and move onto something else.

Do you feel this content is inappropriate or infringes upon your rights? Click here to report it, or see our DMCA policy.
fantasia 2015Tim KirkJay KirkClu GulagerZack NormanLeon VitaliBriar KirkDramaHorrorMystery