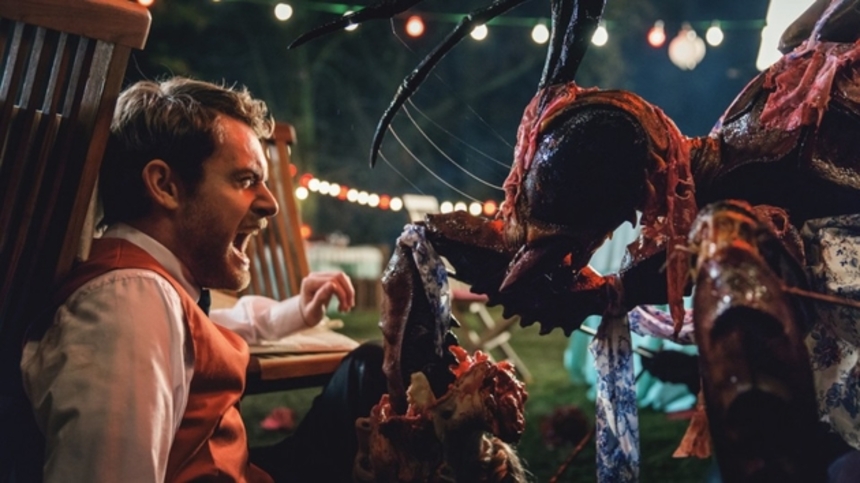 Benni Diez takes on the creature feature in his debut film Stung, which, while set in the US, was actually shot in Germany. With a few familiar faces in the supporting cast and generally strong production values, his film coasts by on its modest ambitions, without ever trying very hard to break out of the box.

An elderly woman is throwing a do in the garden of her country manor, which is being catered by Julia and Paul. The awkward party ambles along just fine until, mutated by illegal fertilizer, a breed of seven-foot wasps emerge from the ground and descend terror upon the guests. Now it's up to Julia and Paul to save the day, and along the way discover how they really feel about each other.

Stung opens with overhead shots of a beautiful field accompanied by a pretty ditty with piano trills that soon turns to ominous strings as the camera ventures down to the ground and between the blades of grass where a wasp viciously attacks a honey bee. It's a simple but effective set-up which establishes the tone of what's to follow, even if it never quite lives up to its initial glimmer of promise.

The film's strongest quality, and perhaps not something you would expect from this kind of production, is its photography. Always beautifully lit and strikingly framed, you may sometimes forget that you are watching a gory creature feature. This quality doesn't save it from its missteps but makes for a welcome distraction during the story's more lethargic stretches.

Less convincing, but more familiar to this territory, are the spotty performances, from the charisma-deprived leads, to the B-list stars (such as Clifton Collins Jr. and Lance Henriksen) lending their names, but not their effort, to the production. Jessica Cook tries her damnedest to knit some gumption into the driven Julia, yet she seems out of her depth, earnest but uncomfortable. Her co-star Matt O'Leary, as the laid-back Paul, is marginally more convincing, but he also seems to swim between some of his lines, and perhaps that's the problem. Both of are limited by Adam Aresty's script, which offers them lame dialogue and two-dimensional characters. In general, the story lacks the snappy wit and genre twists that might have made this a great deal more fun, rather than just passable.

Effects-wise, there are a few strong gross-out moments, such as a giant wasp bursting out a woman while her face remains on its leg, but for the most part the film is pretty tame and is content to spend most of its time with a small group of survivors indoors who talk a lot but don't do very much.

And that's about all there is to it. A decent start is slowly forgotten after the initially flurry of panic and instead of creative kills, resourceful heroes and morbid humor, Stung treats us to something that is far too banal given the premise.

Do you feel this content is inappropriate or infringes upon your rights? Click here to report it, or see our DMCA policy.
benni diezclifton collins jrcreature featurelance henriksenstung