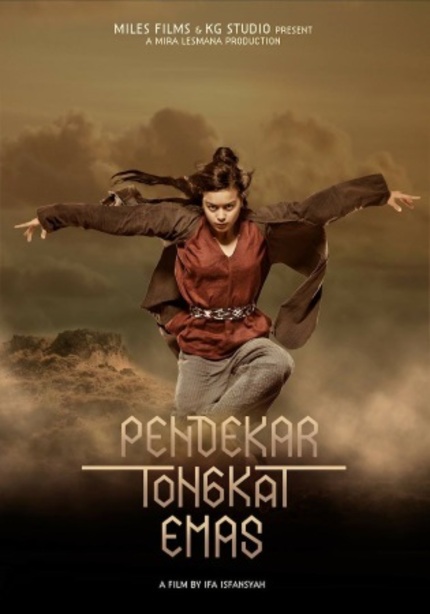 Over the last few years there have been a small handful of high profile Indonesian films hitting the festival and art house cinema circuits. The most recent resurgence in Indonesian films has come, strangely, via the intervention of a couple of Western filmmakers who've done amazing work with Indonesian performers and topics. Gareth Evans' Merantau, The Raid: Redemption, and The Raid 2 and Joshua Oppenheimer's brutal documentaries The Act of Killing and The Look of Silence have been getting almost unanimously positive reviews since they began showing to festival crowds back in 2011. What hasn't proven to be quite as popular are homegrown productions.

Not to knock either Evans or Oppenheimer, both seem very well versed in the culture and have no interest in Westernizing their stories, but there is a certain pride that comes from a national film industry being able to create and present their own productions. Festivals around the world have been able to pick up a few films and champion a few filmmakers here and there, Joko Anwar (Kala, The Forbidden Door, Ritual) springs to mind, but his films are often more cerebral than flat out entertainers. Well, The Golden Cane Warrior might be able to fill that void nicely.

This film, a sort of tribute to the wu xia comics and novelettes popular all over southeast Asia for decades, is a pretty impressive achievement for director Ifa Isfansyah.

When an aging martial arts master's health begins to decline, she must choose which of her four pupils deserve the knowledge and power that come with the mystical golden cane and it's legendary "ultimate move". This ultimate move is undefeatable and renders its master as the de facto supreme warrior in all the land. However, when she chooses the two meekest of her students to be her heirs, the older, stronger ones don't take too kindly to the snub and they steal the cane and attempt to hunt down their rivals to cement their position as the most feared warriors around.

What follows is a very well drawn story with typical wu xia flourishes and some mostly very decent looking action. We're introduced to the master's four pupils, who quickly unveil themselves as either black or white hat characters in this world with few shades of grey. The evil usurpers quickly establish themselves among the disparate warring clans as the top fighters by virtue of their possession of the golden cane and manage to unite the majority of warriors against the innocent, but fleeing white hat warriors. Just when it seems as though all hope is lost, the wounded warriors stumble upon a mysterious master with a complicated past that is intricately tied to their own. It's the stuff of classic wu xia films of the last fifty years, and it works pretty darned well.

The Golden Cane Warrior is not perfect, but it's a lot of fun. It's a bit too long, and the pacing certainly leaves room for improvement, but this is less of an all out action film and more of a martial arts drama with special attention paid to the martial arts. There is a bit of wire work, but it's more of a flourish than a crutch, and the action choreography is generally pretty good. It's not on the level of something like The Raid, but it also isn't trying to be, so no harm done. My biggest issue is the actual look of the film which feels more like a really good TV serial than a feature, but that's mostly me being persnickety about digital video production.

I know there are fun Indonesian films out there. Whether it's the balls out insane '70s action cinema of Arizal and Barry Prima, the intellectual horror of Joko Anwar, the brutally extreme cinema of The Mo Brothers, or even the stupidly goofball Garuda films. However, as fun as those films are, they don't have what I see to be the universal appeal of martial arts films like The Golden Cane Warrior. While it's certainly no Crouching Tiger, Hidden Dragon and it won't catapult its creators into the international limelight, it could definitely serve as an interesting point of departure for film fans looking to dip their toes into Indonesian films. Solid, entertaining, and easy to follow; what else do you need?