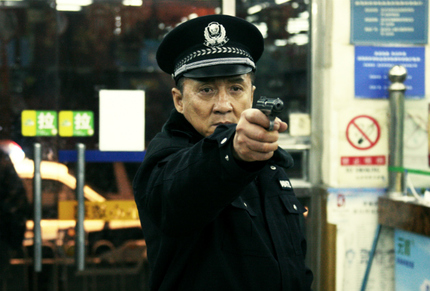 A sequel in name only to Jackie Chan's hugely popular action series, this latest offering moves proceedings to mainland China for a small scale, straight-faced and relatively thrill-free drama with a tendency to pontificate about civil responsibility.
Jackie Chan's Police Story films remain some of the actor's most entertaining and successful work, notorious for their frenetic pacing and jaw-dropping stunt work to this day. While 2004's New Police Story saw things take a turn towards more straight-up drama, this fifth entry in the series hardly seems to belong at all.
For starters Chan plays a totally new character, Police Captain Zhong Wen, a sullen downtrodden law enforcer reeling from the recent death of his wife. Summoned to a nightclub by his estranged daughter, Miao Miao (Jing Tian - recently seen opposite Donnie Yen in Special ID) Zhong unwittingly becomes embroiled in a hostage crisis when the club's owner, Wu Jiang (Liu Ye) locks the doors and takes his guests captive.
Complicating matters, Wu is also Miao Miao's new boyfriend, a coupling Zhong disapproves of wholeheartedly, but that soon becomes a moot point as Wu's plan unfolds. After demanding the release of a convicted murderer, Wu's hostages soon realise they all know each other and that their captor's real motives point to a single tragic event in their collective past.
The set-up is decent, but noticeably low-key compared to earlier films in the series. Approaching the material as "Die Hard in a nightclub", the film has the potential for weighty, high-tension stand-offs, but few opportunities for large scale stunts. As a result, there are a number of tenuously-related flashbacks featuring car chases, punch-ups and shootouts to keep audiences engaged, but even they feel like director Ding Sheng is compensating for his primary narrative, while also firing at a smaller calibre than anticipated.
Along the way, Zhong is called upon by the other hostages to restore law and order, but to do so in a manner that is just and righteous. When Wu's ulterior motives are eventually exposed, almost every character on screen is held accountable for some form of corruption, immorality or otherwise irresponsible behaviour that must be addressed, confessed to and appropriately atoned for before the night is out. Jackie Chan has been very vocal in recent years about his desire to dial down his action roles and assert himself as more of a purely dramatic performer, as well as further ingratiate himself with mainland audiences and investors - sometimes to the disdain of his Hong Kong fans. While his last film, CZ12: Chinese Zodiac was relentlessly insufferable it proved a monster hit at the Chinese box office and did include moments of innovative stunt work, despite his earlier proclamations.
No such luck in Police Story: Lockdown. Chan leaves almost all of the fighting (what little there is) to other characters, and actually loses his only real scuffle. There is very little bona fide martial arts anywhere in the film - save for a rather baffling flashback in an underground Muay Thai club. Nor do we see much classic Chan stunt work, other than a brief rooftop altercation that never threatens to raise the pulse. Nope, Chan really wants to be taken seriously here. Zhong is a depressed, mournful individual, a confessed bad father, who quite possibly should not be on active duty. Most of the time, Chan just looks like a sad puppy.
Elsewhere, the only characters given any kind of breathing space are Liu Ye's crusading villain and Jing Tian's stroppy daughter, and there's little effort to let either of them grow into anything more profound or substantial. Wu's plan never really makes sense, and is almost inconceivable to execute, while Miao Miao flips implausibly from adolescent rebel to saccharine sweet daddy's girl the moment shit gets real.
Ding Sheng previously collaborated with Chan on Little Big Soldier, a genuine highlight of the actor's recent output, and here is credited as writer, editor and director. Perhaps in an effort to inject some energy into the film, Ding employs plenty of shaky-cam and rapid-fire editing, even during simple dialogue scenes (of which there are many), which are more likely to induce nausea than excitement in his audience.
Police Story: Lockdown has proved another monster hit on the mainland, where it was released in 3D and IMAX versions and scored Chan his biggest opening day ever. Hong Kong gets only a standard 2D Cantonese-dubbed release, which goes some way to highlighting how little confidence local distributor Emperor Motion Pictures has in the film, while the content and themes illustrate that Chan knows his audience - and it's not us.
As a result, audiences approaching the film as the latest instalment in the Police Story franchise stand to be sorely disappointed. However, for those keen to watch a dour-faced Chan mope around an empty nightclub while Liu Ye lectures people on their civil responsibilities, Jackie will be more than happy to take your cash.
Review originally published in connection with the film's theatrical release in Asia in January 2014, when it was titled Police Story 2013. It opens in select theaters in the U.S. on Friday, June 5, and will also be available via various Video On Demand platforms.
Sign-In to Vote
Tweet 0 Submit

Do you feel this content is inappropriate or infringes upon your rights? Click here to report it, or see our DMCA policy.
ActionChinaHong Kong Jackie ChanLiu YePolice StoryPolice Story 2013

I once imagined that when Jackie got too old to fight, he would gracefully transition into behind-the-scenes roles such as directing and choreography. Instead we've been subjected to about 15 years of wasted potential. What a waste.

The thing is, there's more to him than just fighting, and the last 15 years have had quite a few highlights of his career. I don't see why anyone should disappear past 60 (or past 50, since you mention the last 15 years), least of all Chan, who still has a unique star presence, and has developed into a pretty good dramatic actor. I for one am grateful that he's still pushing himself, even if there are occasional duds along the way.

I liked it, but I don't know why they had to name this film Police Story... It creates a set of expectations that this film didn't need. That's like making Little Big Soldier and entitling it Drunken Master 2010.

The problem is, he's not very good as a dramatic actor. Films like SHINJUKU INCIDENT, 1911 and others fall down because of Chan's performances. For my money, LITTLE BIG SOLDIER is the only genuine highlight of his career in the 21st Century, but then I must confess that I have never been much of a fan, even back when he was "good".

I think he's an excellent dramatic actor in terms of poignancy and intensity, but not in terms of variety, because he insists on playing clean, virtuous characters most of the time.
But to me, his 21st century output has been more hit than miss, I think he's managed to stretch and inject some variety in his choice of films. Very few classics (though New Police Story has many of the makings of a HK classic), but to me, a good deal of quality, albeit in a sturdy commercial way.
Stars like him, who've excelled for so long at one thing, often face an uphill battle in getting some recognition as dramatic actors. He's convinced me, I do hope he'll end up convincing more people.

I agree with you about Little Big Soldier. Jackie Chan has a tendency to overact and if he wants to be a good actor, he has to be more daring with his choices. Like Qinlong says, he always plays virtuous characters.

Evidence of his overacting would be New Police Story. When he pushes the carriage with all his colleagues resting, I was laughing my ass off when he just blubbered like an idiot.

I don't necessarily put all the blame on him, but on director Benny Chan, who always emphasizes obvious "actor moments" in his films. In Rob-B-Hood, it's the same thing, with Jackie overacting. And it's not just Jackie, most actors suffer. Like Aaron Kwok in Divergence. Or Andy Lau in Shaolin. Or Jaycee Chan in Invisible Target.

So it's not just daring roles Jackie has to consider, but choice of directors. Working with director Peter Chan would be a guaranteed plus. I have never seen a bad performance under his direction.

I think the problem there is that Jackie is ALWAYS more powerful than his directors in his HK / Chinese films. He's kind of like Stallone that way. He may only be credited as the star but, really, the director (and editor and all the other department heads) are there mostly to service him and do what he wants.

His performance in the Karate Kid remake is, to me, a legitimate career highlight. He's great in that.

It's so funny to see this come out finally when I saw it back in 2013. It was so slow to come to the US, just like the rest of Jackie's latest film. It seems for good reason, it's so boring. So much of what Jackie puts out now is just awful and he uses CGI way too much. Add to the fact he thought people destroy priceless artifacts by throwing them into volcanoes ; he really needs some help and people around him telling him how bad he's ideas are.

Jackie's greatest fight scene (in my humble opinion) was in DRUNKEN MASTER II, underneath the train with Lau Kar-leung, who was 60 years old at the time. Instead of trying to hide getting older, Jackie should embrace it,use it, and also switch back to using more traditional Kung Fu styles and weapons, which bring out the grace in the form.

Hmm, interesting choice, but I agree with the sentiment. Either that, or start directing again and try to give the world some new stars.

he is embracing it. he's always the old guy in his movies that can kick ass duh.

let's let him do want he wants. I don't give a shi if I'm old or not. I'm pretty sure jackie is living life to the fullest and doing wat he loves

But he still tries to fight like a young guy. Hence my point.

Agreed. It's because of this that a lot of creative people experience a decline in quality over time. They find themselves surrounded by people who only say "yes" to them.

He loves making poor films that water down the greatness of his filmography? I doubt it.