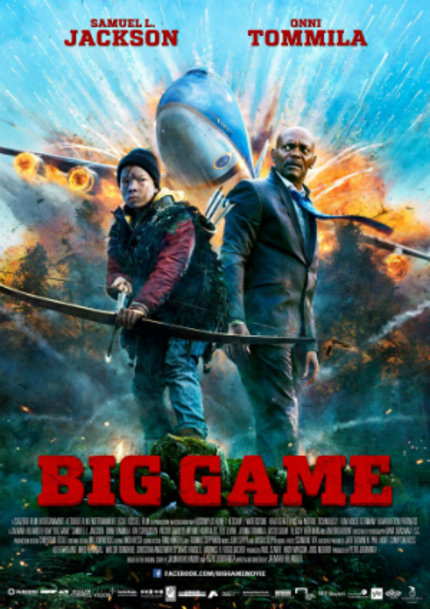 It's such a delight to see a film that plays by its own rules, fulfilling the premise that it sets up, and delivering right through to the conclusion. This is especially true for Midnight movies, as often you get a mildly clever idea, only to have it beaten to death (sometimes quite literally) as the mediocre plot is stretched razor thin.

I last saw director Jalmari Helander here in Toronto with Rare Exports, a film I adored back in 2010 for its wonderful control of tone and beautifully staged action. While that was a high concept Christmas movie, owing very much to the likes of Jurassic Park, Helander's latest film borrows from several other Spielberg-ian elements to craft an absolute gem of a movie.

The premise for Big Game is stunning in its concision - a kid is off on his coming-of-age hunting trip when Air Force One is downed and the President crash lands in a capsule. Said kid takes it upon himself to help out Mr. President, while the Situation Room back in Washington frets.

Oh, and the President is played by Samuel L. Jackson. And that war room is filled with strong actors, from Victor Garber and Felicity Huffman to the epically great Jim Broadbent. Plus, Ray Stevenson shows up as a Secret Service guy.

But it's young Onni Tommila who, as with Rare Exports, steals the show. He's terrific, a refreshing change from the way child action stars are too often used.

Still, Midnight Madness programmer Colin Geddes is spot on when he speaks of the Amblin ethos of the film. This is another of those Spielberg-ian kids, the adolescent in E.T.: The Extra-Terrestrial or The Goonies or even Indiana Jones and the Temple of Doom who gets into danger and then rises to the occasion. It's necessary to make the danger believable and intense enough to feel like there's real jeopardy, resulting in great moments of catharsis when things work out. Add in some snappy dialogue, and you've got a fine recipe for a kind of genre classic.

Samuel L. Jackson is great here, doing his regular shtick but with a commitment that's been lacking in some of his more recent forays into genre cinema. There's a sparkle in his eye that's been absent, and its return is a welcome one.

As the plot plays out, and bigger and bigger explosions take place, it's perhaps easy to overlook the stunning vistas and quite pitch-perfect direction that Helander provides. The quips feel earned, the crazy situations and set pieces well in keeping with the type of film this is. As the stakes get higher and higher, there's both a comfort in the familiar and a recognition that this is very much its own film, not just a pastiche of other films.

The best thing you can say about Big Game is that it feels like one of those ideas that feels like it should have been done long ago, like the crafting of a beautiful pop song you feel like you've heard your entire life. Yet the film, at the same time, feels totally fresh, a welcome addition to a Midnight slate that can usually feel a bit dreary and morbid.

Big Game does it all - you've got a great cast going at it full bore, some exotic locales shot extremely well, and a delightfully compact storyline that never overstays its welcome. Helander further establishes himself as a genre director to be contended with. Missiles are flung (in both the archery and guided variety), battles are played out, and there are enough twists and turns to keep you guessing throughout.

Big Game is big fun, a terrific genre film that once again shows that the Finns can make films of this nature that rival those from anywhere else in the world.

Review originally published during the Toronto International Film Festival in September 2014. The film opens in select theaters in the U.S. on Friday, June 26.

Do you feel this content is inappropriate or infringes upon your rights? Click here to report it, or see our DMCA policy.
FinlandJalmari HelanderSamuel L Jackson