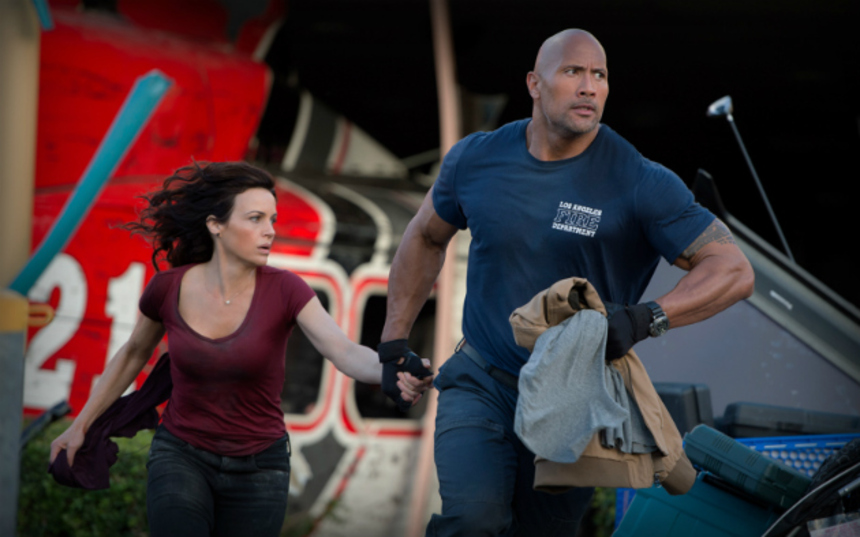 Look out, earthquakes! Mess with Dwayne Johnson's family and he will punch you in the nose.

Completely divorced from reality, San Andreas is a large-scale, family-first action movie that stars Dwayne Johnson and millions, perhaps billions, of pixels, all gathering together in messy 3D compositions that are magnificently rendered in exquisite detail to approximate the destruction of the state of California and thousands, perhaps hundreds of thousands, of its inhabitants.

Johnson is a rescue worker for the Los Angeles Fire Department, and in the opening scenes we see his brave, daring leadership of his crew as he risks life and limb to save a young woman who is trapped in her car, dangling over a newly-formed crack in the world. Soon enough, however, Johnson will go A.W.O.L., stealing a helicopter so that he can meet up with his daughter in San Francisco.

Now, there is no good reason for him to abandon his duties at this point; his daughter is safe and sound, and out of immediate harm's way. But, darn it, Johnson puts his family first! To hell with his fellow crew members -- with whom he shared in military rescue service -- and to the devil with people in Los Angeles who might have been saved by the helicopter that he's nicked for his own personal transport. He needs to make sure his daughter is OK, and reunite his family!

See, Johnson and his pretend wife Carla Gugino have separated, and she has moved on to a very wealthy architect / real estate developer (Ioan Gruffudd). Johnson has even received divorce papers! He knows it's his fault because he clammed up after one of their daughters died, and he's sorry and all that, but he doesn't know what he can do to make things right. Anyway, Johnson is still tight with his daughter Blake (Alexandra Daddario) -- or "BLAKE!" as she's often called as the movie unfolds -- who is heading off to college in Northern California but his rescue work has interfered with his plans to drive her there, so... Frankly, no plot description is necessary, because the script -- screenplay credited to Carlton Cuse, story credits to Andre Fabrizio and Jeremy Passmore -- is very careful to foreshadow every major plot point at least once, if not twice or thrice. It's almost as though the filmmakers anticipated that viewers might be tempted to step out (or fall asleep) between the very loud disaster sequences, and kindly made the story easy to follow for everyone.

The actors are grouped together to make it even easier to follow. Johnson and Gugino are warm and engaging as a married couple on the cusp of divorce, more sad and disappointed than angry as they take various modes of transportation to see their daughter. Daddario takes charge of her scenes in San Francisco; she's an able and intelligent action heroine who certainly stands out with her fiery yet always considerate leadership, teamed with a plucky young visiting Brit (Hugo Johnstone-Burt) and his witty younger brother (Art Parkinson, who might be familiar from the first three seasons of Game of Thrones).

The third group is led by Paul Giamatti, who is the brains of the operation as a seismologist at Cal Tech, an elite private university in Pasadena, near Los Angeles. Giamatti has developed a predictive technology for earthquakes, which comes in handy as the movie begins. Archie Panjabi is a television reporter with great timing.

The movie briskly glides through sequences of mass destruction that should be absolutely devastating, if not entirely paralyzing to witness, yet insists that what's most important is one's personal attitude. No doom and gloom here, no sir! As directed by Brad Peyton (Journey 2: The Mysterious Island), photographed by Steve Yedlin, and edited by Bob Ducsay, San Andreas aims to deliver a positive message in the face of apocalyptic disaster. (Credit as well to production designer Barry Chusid and the hundreds if not thousands of behind the scenes personnel.)

Even as skyscrapers crumble and thousands of people perish, the harsh realities are quickly whisked off-screen in favor of action-movie heroics. Intentionally or not, San Andreas borrows loosely from the disaster movies that were prevalent in the 1970s -- notably Mark Robson's melodramatic Earthquake (1974) -- substituting all-star graphics for an all-star cast. The simplicity of the plot keeps it in the background, and the resolution of the story and the fates of its characters are all foregone conclusions.

This allows the mind to wander; it's hard not to stare in shock and awe at the beautiful, artfully-conceived destruction that is depicted on screen. The end of the world has never looked so inviting.

The film screens in select theaters on Thursday evening, May 28, and then opens wide in theaters across North America on Friday, May 29. It opens on Thursday or Friday in much of the world, in fact, including South America, Europe, the Middle East and parts of Asia. Visit the official site for more information.

Do you feel this content is inappropriate or infringes upon your rights? Click here to report it, or see our DMCA policy.
alexandra daddarioBrad PeytonCarla GuginoDwayne JohnsonearthquakePaul Giamatti