Destroy All Monsters: All We Have Are Our Bodies On FURY ROAD 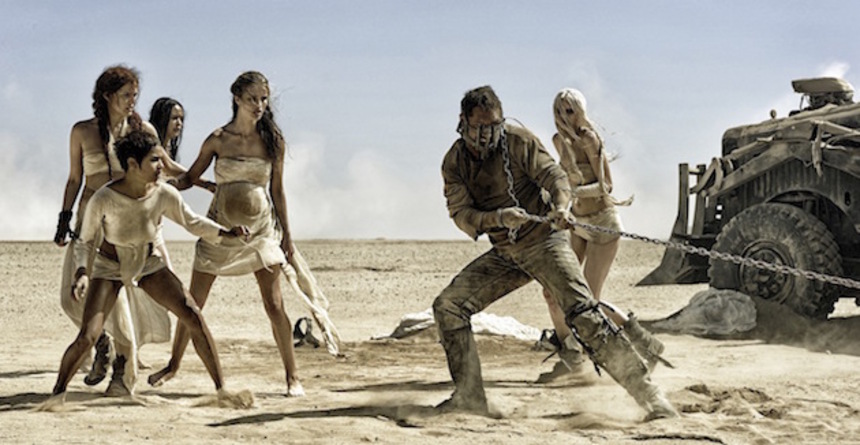 In Mad Max: Fury Road, we get the great existentialist Western of our time. Save one character murmuring prayers in one shot to anyone who will listen, God is not in evidence. The movie is entirely bound up in human choices, and its characters come to understand that the only thing that means anything is what they choose to do - and do together.

In 2015, I suppose, it takes a two-hour rolling fireball of a movie, roaring across the Namibian desert, to expose the flesh of the human experience. And boy, does it ever.

If The Road Warrior was driven - literally and figuratively - on gasoline, Fury Road is built around wholly human fluids. Semen, thankfully, is left out of things except by association; but Mad Max: Fury Road is a bubbling wellspring of blood, water, sweat, and milk.

(And sure, there's gasoline, because one can never get far from gasoline in this line of work. And chrome spray paint. Just go with it.)

The fluids have been monetized, commercialized, made into product; Immortan Joe has built his citadel in the desert on a giant clockwork contraption that pulls the water up from underneath, only so that he can withhold it; "Do not become addicted to water," he warns his disciples, for no particular reason other than to emphasize, I suppose, the fact that he might stop providing it.

Meanwhile, behind him, lactating women are pumped six-at-a-time for their breast milk; imprisoned vulvas are kept exclusive by saw-toothed chastity belts; and Max is strung up in a gibbet to serve as a human blood bag for a recovering road warrior.

It must be one of the most passive hero introductions in a blockbuster in a decade: Mad Max spends the first act of Fury Road unable to move, turn his head, or do anything other than jibber to himself.

He gets free - because this is a Mad Max movie, and there wouldn't be much of a movie if he didn't - and runs across Imperator Furiosa and her war rig tanker truck, along with Immortan Joe's escaped harem of varyingly-pregnant slave women. Together, they all take off across the desert, with a War Boy in tow.

As this all gets started, there are some entertaining reversals to keep the hierarchy continuously revolving in terms of who's hostage, who's passenger, who's captor and who's in charge - a post-apocalyptic episode of Who's The Boss?, set in the truck from Duel, in which Max's only real priority is sawing off his iron mask with a small chisel, and then getting the hell on his way.

But before long, there comes a moment - not called out in any overburdened dialogue, thank goodness, but you'll know it when you see it - when all the people on the fleeing truck seem to realize simultaneously that they're not just in this together, but entirely dependent on one another. (The cue on the soundtrack is called, perhaps inelegantly, "Brothers In Arms.")

Motorcycles descend on the tanker in unholy zigzags and Immortan Joe's army is (temporarily) headed off at the pass, and only in one of those purely cinematic feats of brilliantly coordinated teamwork can the denizens of the war rig defend themselves from, well, life itself, I guess - or life's ceaseless willingness to throw shit at you, more shit, more and more shit until everything you're trying to do is just about surviving and getting to the other side.

This is where Fury Road - which has not been going at anything less than an aggressive clip so far, I assure you - really takes off. It doubles back on the subtext of its plot construction and circles it in a red pen, and thus stops being an action movie, and starts being a movie movie.

Fury Road has been called feminist, and unobtrusively so, and it would be those things (and wonderfully) just for its flawless flipping of the script on every trope that would normally land on a movie like this in its treatment of its female characters.

But Fury Road also brilliantly draws a direct, and vital, equivalency between all the characters on that truck (except Furiosa): they've all taken back their right to control their own bodies, that right having previously been co-opted by others.

The Wives (Immortan Joe's "breeding stock"), Max (War Boy's blood bag), even War Boy himself (a suicide bomber-ish zealot promised a spot in Valhalla in reward for annihilating himself for the cause) are all in the process of reasserting ownership of their own flesh - in a race across the desert at 200 mph.

It's a problem set that we're used to seeing conferred upon nominal "others" in cinema - whether women or minorities - which is heaped generously onto the two Caucasian males here too, as if to inscribe "do you get it now?" on a couple of years of conversation about why the answer to #YesAllWomen is not #NotAllMen, or one cannot respond to #BlackLivesMatter with #AllLivesMatter. Traditional privilege is shattered in Mad Max: Fury Road, the slate wiped clean, all players returned to the start of the game board. It's enough to make one yearn for an apocalypse.

This leaves the heroes free to negotiate their choices in defence of the only thing they have left in this world: their rights to their own agency. And because this is a Mad Max movie and the story is, nominally, his, it will boil down to the story's least-invested character deciding whether or not he gives a fuck, and choosing accordingly.

But importantly, that choice is the only time in the film that Max changes the story's direction - again, literally and figuratively - because otherwise, he knows exactly what his purpose is, and it isn't being the traditional male hero. (We don't need another one of those.) He's the shoulder for Furiosa's rifle. He's the mechanic for the busted valve on the fuel pod. He's, by choice this time, the blood bag for his wounded friend. This group is made of equals.

My favourite beat in the movie comes near the end of the second act. Furiosa and her protectorate arrive at the matriarchal tribe in the desert, the Many Mothers, well-armed warrior women who immediately want to welcome Furiosa and the other women with open arms, but are immediately suspicious of Max and War Boy.

"It's okay, they're reliable," Furiosa assures the Many Mothers. What a wonderful choice for a word; no finer point of praise. I'm a fan of Kelly Sue DeConnick's Bitch Planet comic book and have been happy to see female fans getting "non-compliant" tattooed on their arms... here's hoping I live long and well enough to deserve getting "reliable" tattooed on mine.