J Hurtado
Editor, U.S. ; Dallas, Texas (@HatefulJosh)
Tweet Post Submit
We've been tracking SS Rajamouli's period epic Baahubali for nearly two years, and with its release getting closer and closer the team at Arka MediaWorks have been working double-time to create a major buzz. Part of that buzz is the regular release of some pretty awesome looking character posters for the film. We will keep track of them in this one evolving gallery as they come in. Enjoy! 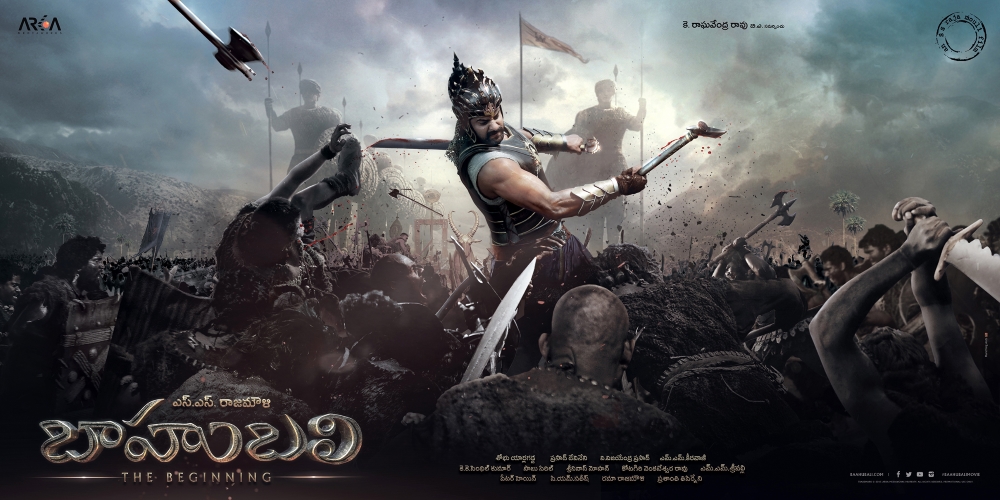 May 26th: Last, but definitely not least, is the amazing character poster for Baahubali's title character, played by Prabhas. Prabhas is a major heartthrob in Andhra Pradesh and has worked with director SS Rajamouli before in his film Chatrapathi, but this is a new level of magnitude for the both of them. Baahubali's final character poster arrives just in time to leave us hungry for the next bit of business, an official trailer launch on May 31st. What shall we do until then? Stare at these amazing images and hope that the film can live up to the hype! 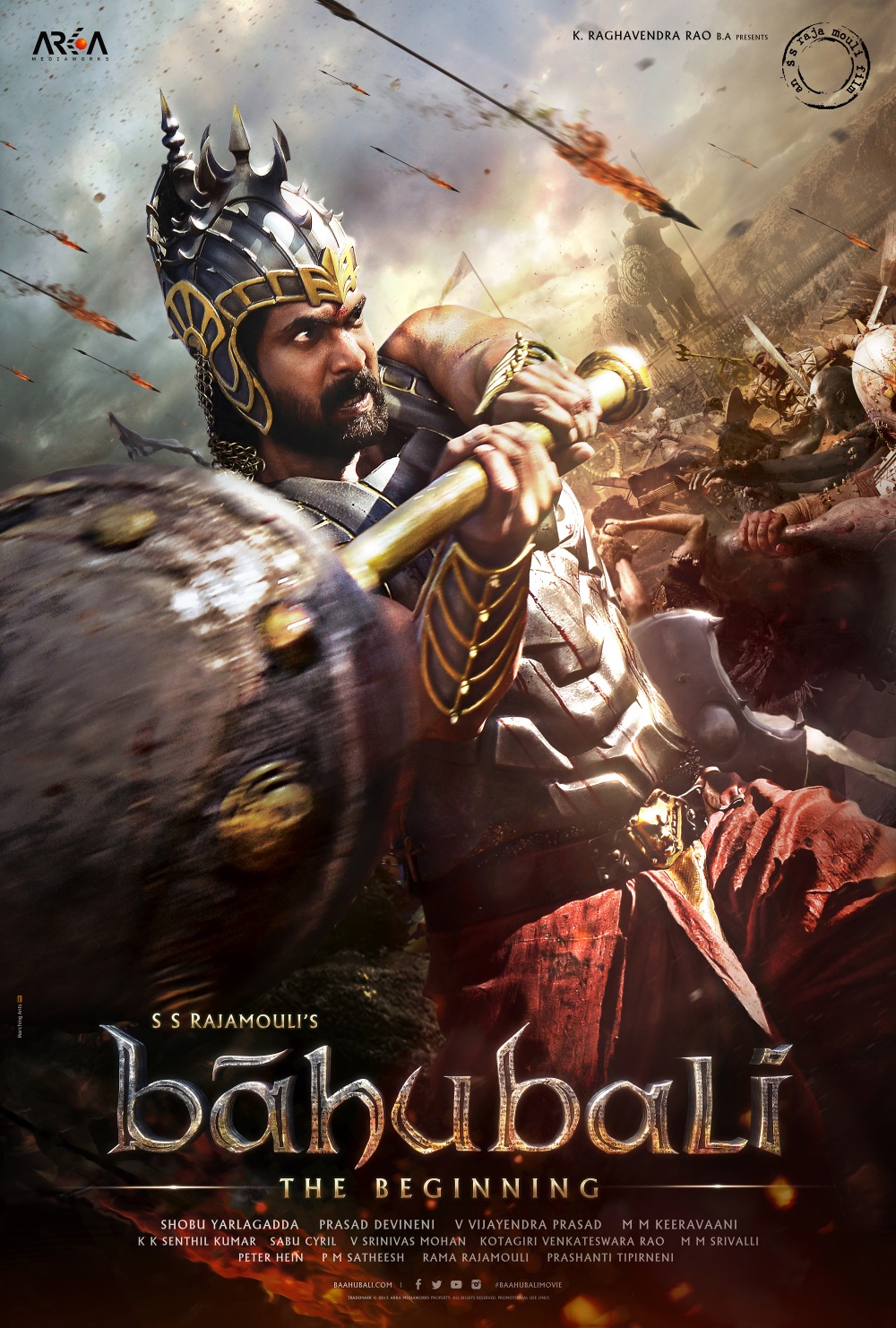 May 20th: Today sees the release of the penultimate, and most kinetic character poster for SS Rajamouli's Baahubali to date. Rana Daggubati has long been known to be the one filling the villain's shoes in Baahubali, but this is our first proper look at him. Daggubati plays Bhallalladeva, according to Rajamouli he is a tyrant king and the brother of Prabhas's Baahubali. Daggubati is a very imposing presence, and Rajamouli is well known for creating memorable villains whether it is Dev Gill in Magadheera, or more recently Sudeep's amazing performance in Eega. This should be good!

This Friday will see the last of the character posters with Prabhas as Baahubali. 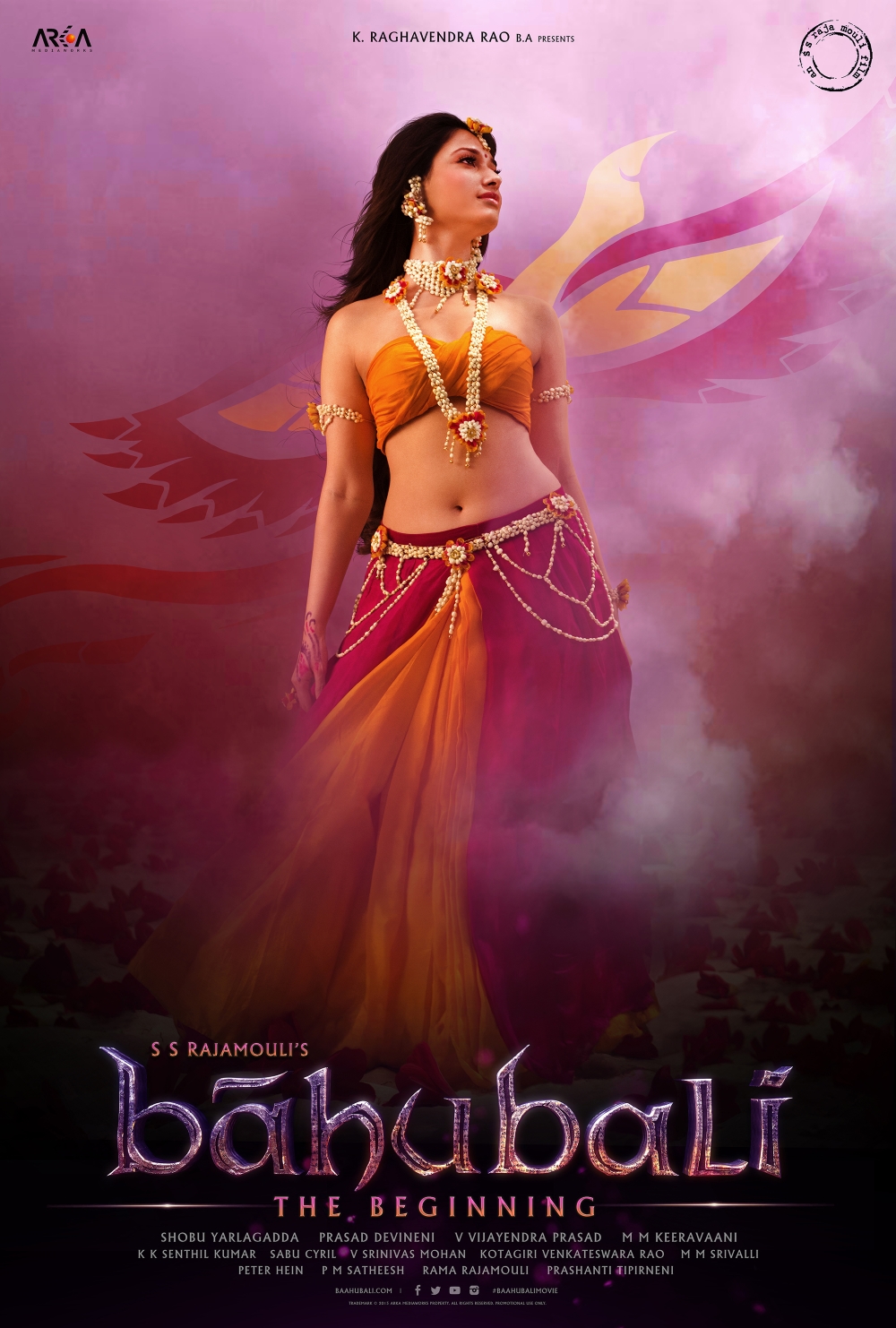 May 18th: Finally, our first reveal of Baahubali's leading lady Tamannah as Avanthika. Tamannah may not be familiar to our readers, but she's been in tons of south Indian movies (and a couple of really awful Hindi ones) over the last 5 years. Of her films that I've seen, her role as the plucky network TV journalist in Cameraman Ganga Tho Rambabu was probably the most endearing. Looking forward to seeing how her role shapes up in Baahubali. 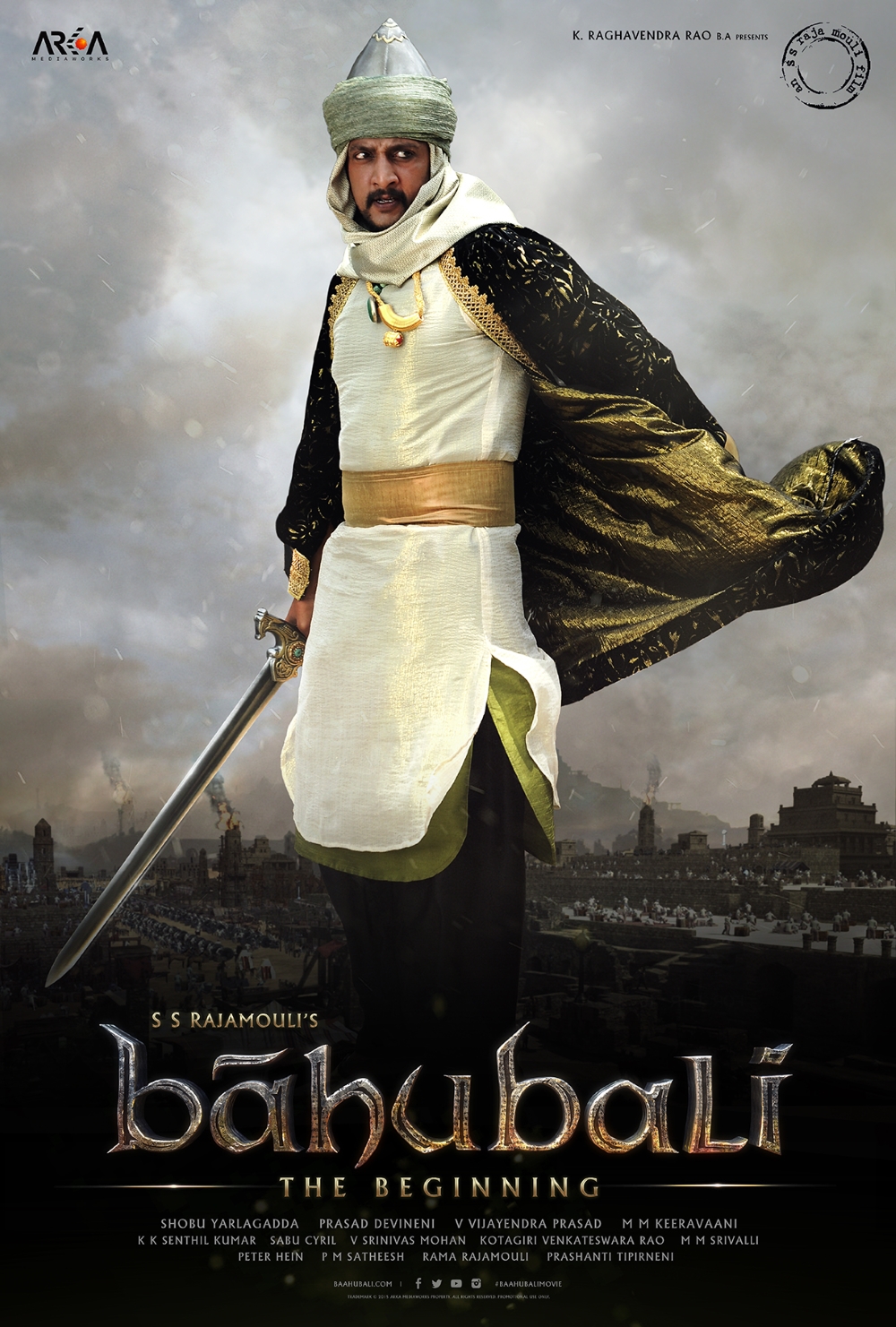 May 16th: Here's a biggie for ScreenAnarchy readers, the first look for Kicha Sudeep's Aslaam Khan in Baahubali. Sudeep is most remembered for his amazing performance in Rajamouli's Eega as the villain, also named Sudeep. Kicha Sudeep is a major star in the South Indian Kannada language film industry (Sandalwood), but it was Rajamouli's decision to cast him in Eega that really increased his stock across India and the world. Although I know it's not a lead role, I'm very excited to see what Sudeep has to offer this time around. 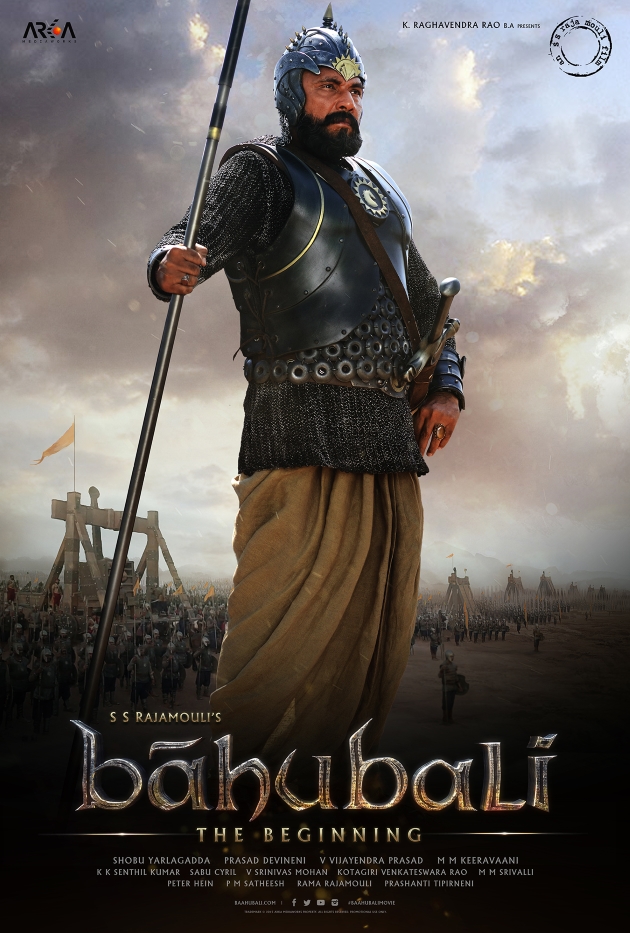 May 15th: Today we are introduced to Tamil actor Sathyaraj as Kattappa. He's called a slave warrior by Rajamouli. Twitch readers may recognize Satyaraj from Shah Rukh Khan's Chennai Express a few years back.

May 13th: We've been graced with the first image of Nasser as Bijalladeva in Baahubali. Nasser is one of South India's most popular villains, though ScreenAnarchy readers might know him best from his role in the Bollywood film Rowdy Rathore, which was actually a remake of Rajamouli's Vikramarkudu. 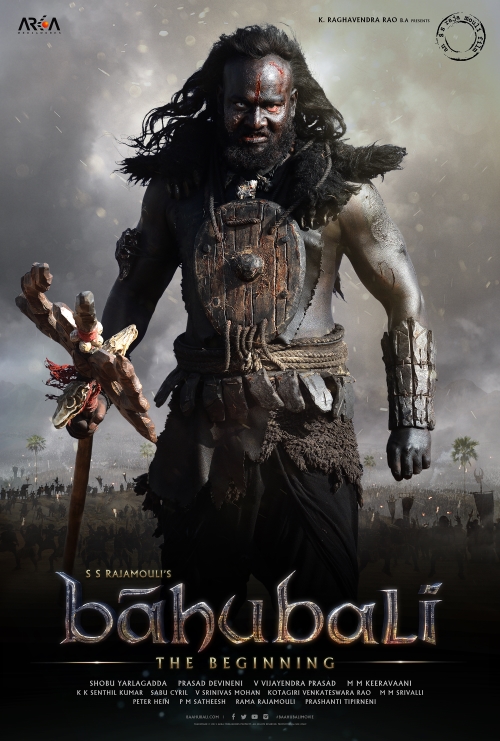 May 11th: This image is my favorite and the most exciting so far because of it's intensity. Prabhakar plays the warlord Kalakeya, the commander of 100,000 barbarians in Baahubali. I can't say that I know anything else about Prabhakar, but this image definitely gives me hope that there will be some grittier elements to the film. Stoked! 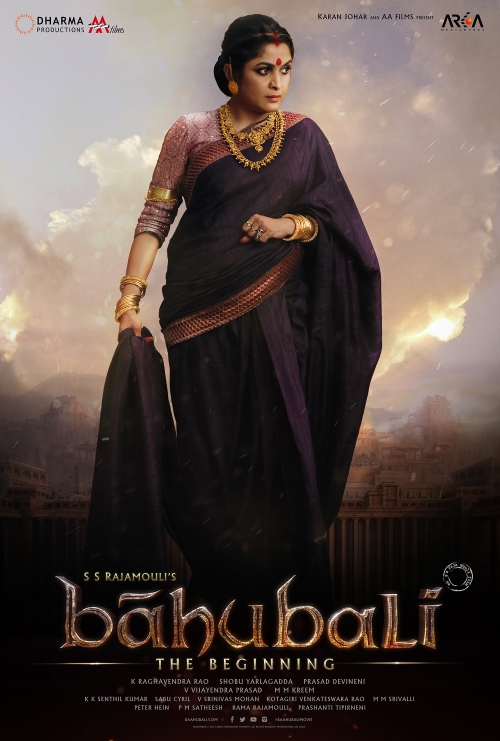 May 8th: This poster shows Ramya Krishna as Sivagami, the mother of the leads characters played by Prabhas and Rana Daggubati in Baahubali. Again, I can't say that I know anything about Krishna as an actress, but the director has mentioned that she was his favorite on set and like a mother to the entire cast. 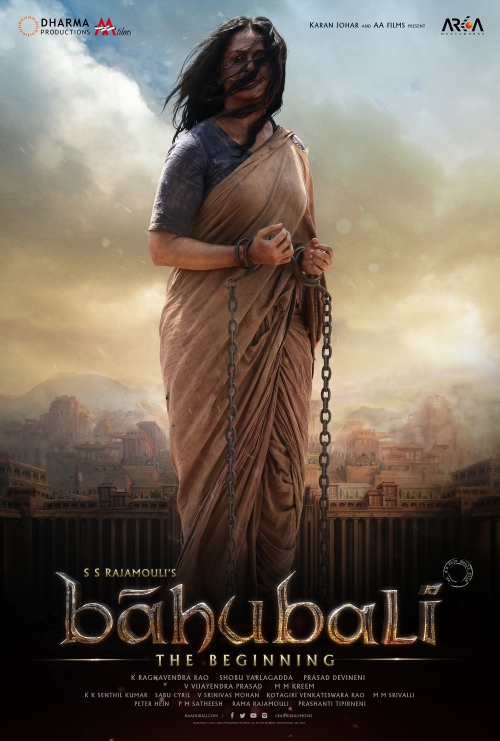 May 6th: Anushka Shetty as Devasena. Here's what I wrote when this poster originally appeared:

This latest character poster reveals the character of Devasena, described by Rajamouli as "tortured and held captive for years," played by Anushka Shetty. While Anushka hasn't done any work in Hindi cinema, she's well known as a leading lady in both the Tamil and Telugu film industries. ScreenAnarchy readers may recognize her from the Tamil Singam films where she played Suriya's love interest/wife. More recently she's been filming another period film, Rudramadevi, in which hers is the title character. Baahubali shares more than just an actress with Rudramadevi, the films also share Peter Hein, south India's most famous action choreographer and fashion plate, I'm sure we'll be seeing more from him as footage from Baahubali begins to appear on May 31st. 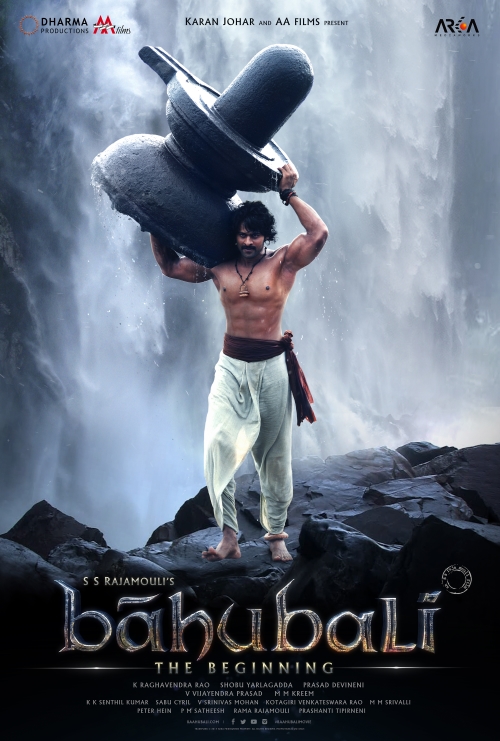 May 4th: Prabhas as Shivudu.

The marketing team behind S.S. Rajamouli's (Eega) Baahubali have really begun to turn up the heat, and after nearly 2 years in production we're starting to get solid looks at some of the amazing imagery the film has to offer. Today we get our first official character poster for Shivudu, the film's protagonist played by Prabhas. The image is strong, as is Shivudu by the looks of it, and does a fine job of continuing to create buzz for what is likely to be one of India's biggest hits of the year both at home and abroad.

Baahubali didn't appear out of nowhere, though, Rajamouli has been working toward this kind of breakout success for a while in a Telugu film industry mired in predictability. While he's worked within the confines of the Tollywood film machine for over a decade, even back to his earliest films you can see a touch of daring and the urge to move beyond that few Tollywood filmmakers have, and even fewer who work within the mainstream.

Rajamouli has made a solid career out of creating mold-shattering star vehicles for Tollywood royalty like Jr NTR (Yamadonga), Ravi Teja (Vikramarkudu), and even Baahubali's star Prabhas (Chatrapathi). However, it was with Eega, a film with huge ambitions, an amazing high concept, and absolutely no big time star power, that Rajamouli finally made his mark on the world. Baahubali follows up on that success with this most ambitious project in Telugu cinema to date. 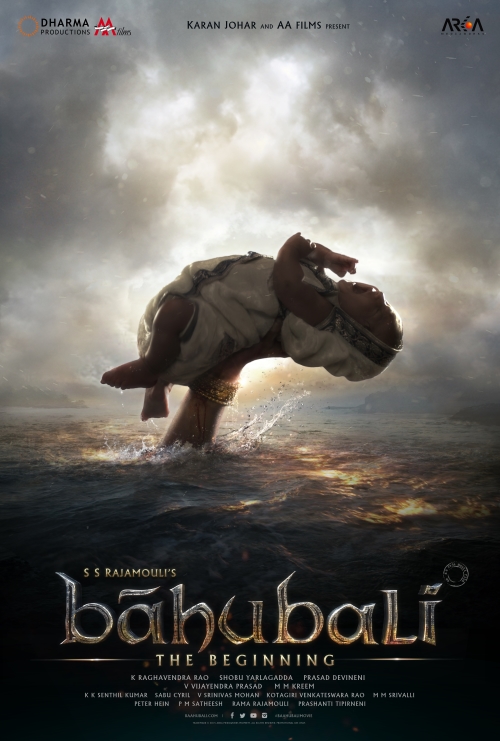 May 1st: James Marsh grabbed the first image from Baahubali and had this to say:

Due to be released in two parts, Baahubali: The Beginning will be hitting Indian cinema screens this July, simultaneously in Telugu, Tamil and Hindi, with the second half arriving sometime next year. An epic period drama, much of the details of the film are being kept under wraps, but Rajamouli gave fans a fantastic first look today by revealing the film's first teaser poster.

"Every story has a single moment at its core which defines and drives the entire plot", said the director when revealing this iconic image. "What follows is the HEART of Baahubali."