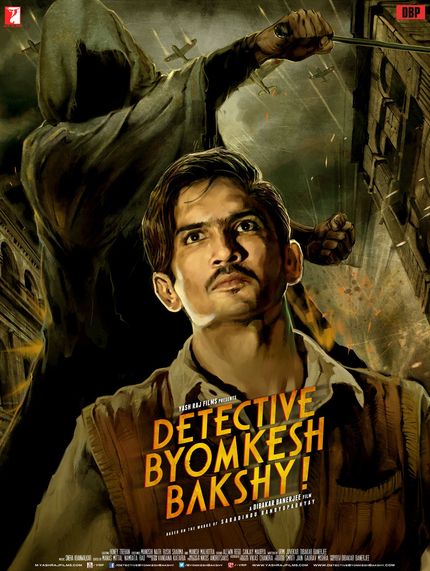 Sometimes I loathe the expectations with which I burden myself.

Dibakar Banerjee's latest film, Detective Byomkesh Bakshy, is a period piece that focuses on the origin of India's greatest literary sleuth. The Byomkesh Bakshy character comes from the many works of Bengali author Sharadindu Bandyophadyay, who drew more than a little inspiration from the inimitable works of Sir Arthur Conan Doyle's Sherlock Holmes. Over the course of 38 years, Bakshy appeared in no less than 32 stories in book form and since the advent of the motion picture industry in India has appeared in at least ten films and numerous TV adaptations. This latest incarnation was an attempt to rejuvenate the character for a modern audience using contemporary sensibilities while remaining grounded in the '40s Calcutta to which the Bakshy character belongs so fully.

If the concept sounds familiar, it should. Banerjee's Bakshy is kin to the recent adaptations of the Sherlock Holmes character through the films of Guy Ritchie and Robert Downey, Jr. Anyone who'd seen the promotional material for Detective Byomkesh Bakshy would have been forgiven for expecting a blow-a-minute action spectacular in the vein of Ritchie's films, however, the trailers did what trailers are designed to do. They lied.

Detective Byomkesh Bakshy, played in this most current adaptation by relative newcomer Sushant Singh Rajput (PK, Kai Po Che), is more of an extremely handsome bumbling detective than the dashing charismatic of Downey, Jr's Holmes. When Bakshy takes on the case of a classmate's missing father, he finds himself slithering deeper and deeper into an inevitable rabbit hole with no clean exit. When twist piles upon turn and the labyrinthine plot threatens to eat its own head, it isn't so much of a "whodunnit" as it is a "whydunnit". This in and of itself is not a crime, and can be done justice; however, the lack of inertia in the film plays havoc on my attention span, leaving me to wonder if each neck-snapping switch in story direction was really necessary.

Dibakar Banerjee is a filmmaker of considerable ability, considerable vision, and considerable talent. What he has trouble with in Detective Byomkesh Bakshy is finding a focus for these gifts. The film wanders too and fro, introducing innumerable competing factions and clouding the narrative drive. The film lacks the punch that I think the director was intending, instead turning what could have been a rollicking good time into a bit of a slog in places.

I was promised action. I expected action. I really, really, really wanted action. However, when the time came for the action, I was left with explanation, exposition, and disquisition. Banerjee is, at times, too smart for his own good. His need to explain and point out each little clue to make sure that his audience doesn't miss a beat slows Detective Byomkesh Bakshy considerably and hamstrings his performers and the action in a way that is detrimental to the film. That's not to say that the film doesn't have its perks, it has many, but there is a lot of waiting to get to them sometimes.

Sushant Singh Rajput, the lead actor who essays the role of Bakshy with elan and confidence, is more than adequate in the role, however, he doesn't own the character in the way that I could never see it embodied by anyone else. In fact, if I had to guess, I would say that studio brass might be wondering how they can turn this film into a franchise with a newer, more charismatic performer in the role who is willing to extend himself a little bit further to make the role his own. The supporting characters are just that as well, with none really making much of an impression apart from the character of Dr. Guha, played here by Neeraj Kabi, who manages to add some much needed pizzazz to the proceedings, though it may be too little, too late.

One area in which Detective Byomkesh Bakshy does not disappoint is that the music is incredible and leaves at least as big of an impression as the narrative does. The anachronistic mix of traditional music, hip-hop, and heavy riffing truly puts the film head and shoulders above its contemporaries who are all just looking for the big radio hit. Among the contributers is the immensly talented and extremely underrated Shena Khanwalkar, who was the music director for Anurag Kashyap's Gangs of Wasseypur. If there is anything that keeps this film moving at more than a snail's pace, it is the use of music, which neatly helps to fill some gaps in the momentum.

I know it may not sound like it, but I really liked Detective Byomkesh Bakshy. However, when one comes to expect greatness, sometimes mere goodness just doesn't cut it. Dibakar Banerjee's last film, an Indian set adaptation of Z titled Shanghai, was an incredible, propulsive experience featuring a completely absorbing performance from Emraan Hashmi that had all of Bollywood buzzing. Detective Byomkesh Bakshy is good, but there's no real anchor in the film on which I can pin its success, and perhaps that is a marker that its success isn't all that successful. I know that the film will garner good-to-great reviews, I know that the film industry will crow about how Dibakar Banerjee has done it again, but I also know that I'm only here to write about what I felt, and what did I feel? Not enough.