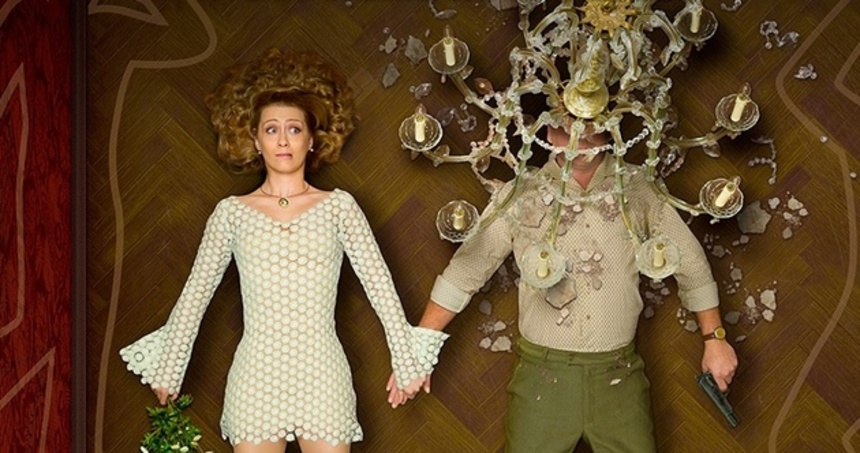 This weekend, Liza, the Fox-Fairy won the Silver Méliès Award at the Imagine Film Festival Amsterdam. It was hardly the first award it won either: a few weeks earlier at Fantasporto, it won awards for Best Film and Best Special Effects. And that last award may give you an indication of just how polished and visually sumptuous Liza, the Fox-Fairy is.

In his feature debut, Hungarian director Károly Ujj Mészáros tells the tale of Liza, a live-in nurse in 1960s Budapest who takes care of the wife of the Japanese ambassador. In her job, Liza has learned Japanese language and culture, and even has befriended the ghost of Tomy Tani, a famous Japanese singer. Tomy often comes to visit, and Liza thinks he is her imaginary friend.

But Tomy isn't imaginary. He is also far worse than a mere ghost, and only pretending to be her friend. When Liza starts dating, he even causes the death of those surrounding her. This happens so often that Liza thinks she must be a fox-fairy, the mythical Japanese creature who unwillingly brings doom to all men who fall for her. The body-count gets high enough for the police to start investigating Liza. Officer Zoltán suspects villainy is afoot, but can't shake the feeling Liza is innocent. Can he prevent the demonic Tomy's evil plans for Liza?

With a story this odd and quirky, you'd be forgiven for thinking the film would be a manic affair, moving all over the place at great speed. Remarkably it isn't: in the first half of the film, Ujj Mészáros takes his time explaining the set-up, and introduces us to his version, or rather vision, of late-sixties Budapest. It is a place where architecture, clothing, cars, and even the people themselves all point to a bright and colorful future, no matter how decrepit they might be on the inside. It's a city where the police force is staunchly communist, but where the citizens read Cosmopolitan magazine and visit fast food restaurants.

In this backdrop, with its cast-in-iron visual design, Liza's every-day life looks like a fairy tale, even though it's not a particularly happy one. The effect is that the supernatural events surrounding her do not seem out of place at all.

The acting fits this look, with people fully embracing their stereotypes, creating grotesque caricatures. Mónika Balsai plays Liza, a character as pure, innocent, naive, kind, earnest and industrious as any Cinderella. Of course Liza is also a master chef, a sterling seamstress, and a skillful knife-wielder when necessary. Hell, when called upon, she even knows how to perform a tracheotomy! At the same time Szabolcs Bede Fazekas plays Zoltán as the perfect policeman, bumbling yet persistent, and honest enough to try and prove Liza's innocence, hard though that is. As a couple you cannot help but root for them, especially since their opponent (played by a gleefully villainous David Sakurai) seems unbeatable, and their prospects for a happy future dire.

In many reviews, Liza, the Fox-Fairy gets compared to the work of Jean-Pierre Jeunet, and Amelie in particular. It is a fair assessment with regards to the attention to design and detail, and the skillful way an off-kilter reality is shown. Károly Ujj Mészáros has created something very special here, a combination of sweet and sour, flashy and dreary, gross and sexy, intimate and spectacular. The end result is very addictive and very impressive.

I loved this film and cannot wait to see what Károly Ujj Mészáros does next. The audiences at the Imagine Film Festival Amsterdam loved Liza, the Fox-Fairy as well, awarding it an 8.7 out of 10, making it end in the top-3 of the festival. And I totally agree with that.

(A side-note: Károly Ujj Mészáros could not be present in Amsterdam to accept his Silver Méliès Award in person, as he had to give a lecture in Brussels on the same day. So he sent an apologetic video to the Imagine Festival. This clip showed him training hard to be in two places at the same time, a process which left him rabid and caged, with actress Mónika Balsai having to speak for him. If anyone is planning to release Liza, the Fox-Fairy on DVD, make sure you get this video as an extra, for it is awesome, and had the audience in stitches!)