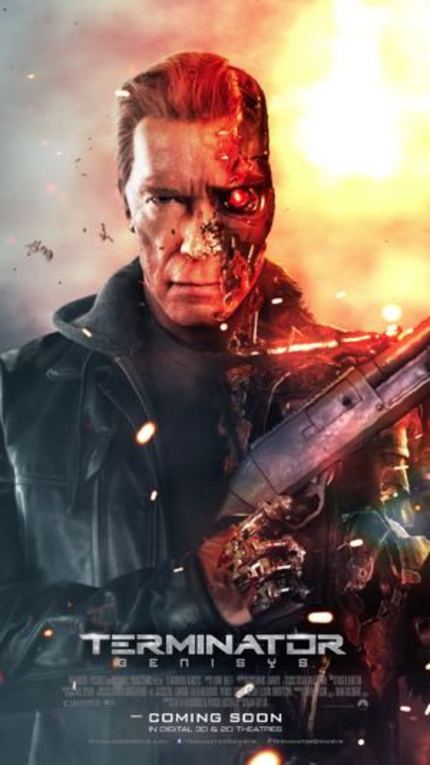 Speaking frankly, Terminator Genisys is struggling to arouse any genuine interest in me right now. Obviously I loved the first two, thought the end of Rise of the Machines excused everything that came before it, and - hey! - actually kind of enjoyed Terminator: Salvation the one time I watched it. So what gives this time round?
Perhaps it's because it doesn't feel like it is really trying anything new. I know they want us to forget about the Bale/McG outing, and that's fine, but this just screams remake while simultaneously employing icons from the original like Arnold Schwarzenegger, as if to say "We have nothing new to add, so here's some of the shit you loved".
I have no problem with a sequel, remake or reboot to The Terminator, but don't try and have your cake and eat it too. Pick what you want to be, and then be that thing. You'd think we'd be more excited about this, with a cast that includes Jason Clarke, Emilia Clarke, J.K. Simmons, Lee Byung-hun, Matt Smith and Jai Courtney...ahh, maybe that's the problem.
Honestly, just thinking about this is gonna make my head explode, just like the old T-800 down below. See, I got there eventually. Terminator Genisys arrives 1 July.

The TERMINATOR GENISYS "living poster" makes Schwarzenegger's head explode! Anyone out there looking forward to this one?

Posted by ScreenAnarchy on Friday, 27 March 2015

Why am I not looking at a poster of KING CONAN?

"I have no problem with a sequel, remake or reboot to The Terminator"
I DO!

Why? THE TERMINATOR will continue to exist.

Leave Terminator alone. Hollywood has lost it. No more new ideas. All copies from better movies...

I suppose my problem with this one is that it's hard to see it as anything but a desperate grab by Arnie at restoring his relevance as an action hero.

I am as cautious about new Terminator movies as the next person, but I think that Genisys - terrible title aside - is the first one for a good long while that seems to want to do something interesting with the whole "4D time war" concept. Shifting timelines and all, it seems to take some cues from the criminally underrated TV series.

What do you mean "Leave Terminator alone"? You appear to be confusing "remake" with "replace".

I'm sorry. You're mistake. I'm not confusing ANYTHING.

We already know that you support Hollywood at any cost.

But I don't. Until Hollywood stop making "remakes", "sequels", "prequels", "reboots", or any new name they invent, I refuse to support Hollywood industry.

Stop copying the past. Start making the future of cinema.