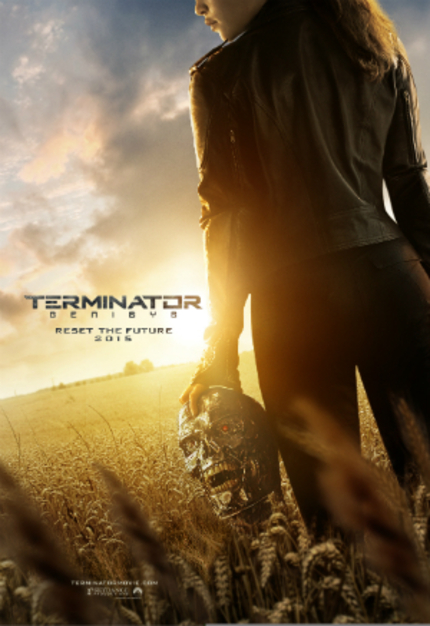 As much as I try to be a positive person, especially about movies that have not yet been released, everything I've seen about Terminator Genisys has induced a sense of dread that it will be truly terrible.
Now, maybe I am completely wrong. I hope that I am. Because the first two movies in the series were absolutely terrific action pictures. The new one, however, looks like it is intent on repeating all the old beats without adding anything new, other than plot "surprises" that the marketing campaign is intent on revealing in advance.
Witness the new trailer, which provides a better look at Emilia Clarke (as Sarah Connor) and Jason Clarke (as future John Connor). Both are very good actors, and presumably they read the entire script before signing on, so perhaps this will play out far better in its entirety than in its advance trailer. I can only dream that that is so, at this point.
Sign-In to Vote
Tweet 0 Submit

Based on the couple of trailers, there is a shocking lack of original images or ideas in this entry of the franchise. Blah.

Skipped the last one. I'll be skipping this one too. A shame really. Such a great franchise potential wise.

Yeah at least we have Bladerunner 2 and Prometheus 2 to look forward to.....

It's a remake and a reboot all mixed at. No nice.

John Connor's apparent true nature, the new kind of creature he seems to be, and the way in which it manifests itself, those are original ideas and images.

The problem is that the hostility of most people towards this film has risen to such a baffling level, that people bemoan the average quality of the visual effects months before actual completion, brand any new idea as "stupid" mostly because it goes in a different direction that the Cameron films, while complaining about a lack of original ideas.
I hope this film turns out to be a pinata : everyone is rabidly beating it with a stick, and then lots of good things come out of it.

Well, considering that the whole premise of the franchise had to do with going back in time and rewriting history, I don't see anything inherently wrong with the approach they're taking here. It could well be terrible (anything could be), but it also looks interesting to me in a way Salvation, a true dead end, never did. I might check this out pending reviews.

At least she's got a nice ass.

If the inclusion of these beta-stage FX are losing them bums on seats, then surely it's advisable not to show them.

Except they were far from terrible, they just looked serviceable. And in this new trailer they seem fine (if they don't seem fine to you, please enlighten me on why not, sincerely).

Like as in not even as good as Terminator 2.

That's a hyperbole I read often. It is generally substituted for any objective argument on how the CGI are supposedly not good.

People were having bad buzz before Rise of the Planet of the Apes came out, so yeah, I'm gonna give this film a benefit of the doubt.

Terminator 2 was both a remake and a sequel, so there is some precedent for this sort of thing.

Yeah, but you can't compare the mastery of James Cameron's hand.