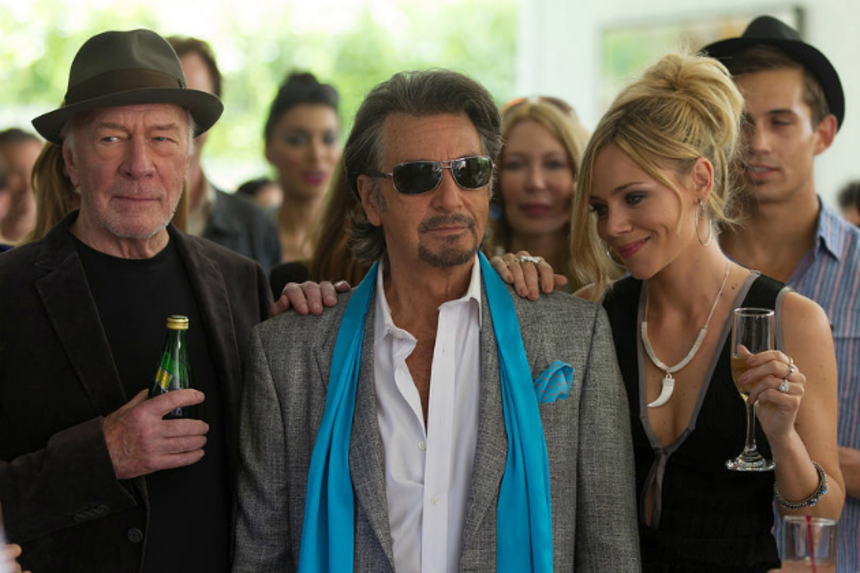 When was the last time Al Pacino appeared uncomfortable or nervous on screen?

Early in Danny Collins, an unabashedly mawkish trifle from writer/director Dan Fogelman, Pacino strides onto the stage at the Greek Theatre in Los Angeles, and belts out a pop song that can best be described as a really bad Neil Diamond knock-off. (Think "Sweet Caroline," if you've ever had that planted in your ear.) Pacino smiles and sings and walks about the stage as though he's never been on stage before, awkwardly gyrating as his backup band plays loudly and the grey-haired audience erupts into a million orgasms.

As the scene unfolds, I thought I was watching a disaster in slow motion. How could Pacino, a longtime veteran of stage and screen, possibly look so unnatural and unappealing in front of thousands of oblivious fans?

Obviously, I'm very slow on the uptake. Because Pacino's titular character is the one who is spectacularly unfit to be on stage, even though no one else knows it. He knows it. So when his magnificently tolerant longtime manager Frank (Christopher Plummer) gifts Danny with a letter that John Lennon wrote to the lad way back at the beginning of his career in 1971, Danny is thunderstruck.

The handwritten letter, warm and kind and embracing, complete with Lennon's telephone number and an invitation to call, was mailed to a magazine that printed an interview with Danny, and it never got passed on to its intended recipient. (This part is inspired by a true incident.) Reading the letter now, Danny reacts as did the Biblical character Saul when Jesus appeared to him on the road to Damascus. The scales fall from his eyes, and Danny realizes he has become a fake, a sell-out, regurgitating the few hits he had to sustain a nostalgic career that has paid him well but left his soul empty.

Instantly, Danny abandons his longtime drug addiction -- no need for rehabilitation here! -- and goes in search of his only child, a boy he has never met. That boy now lives in New Jersey and has grown up into construction worker Tom (Bobby Cannavale), who has a loving wife (Jennifer Garner) and an insanely cute child (Giselle Eisenberg). Naturally, Tom wants nothing to do with the old man, but Danny is persistent. And while he waits, he flirts with hotel manager Mary (Annette Bening). 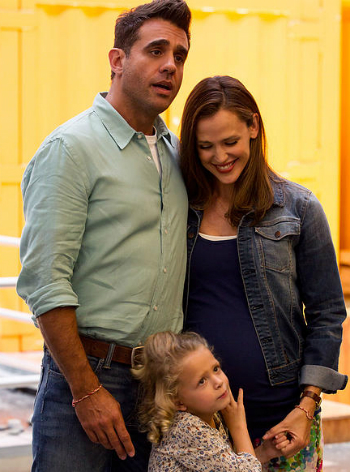 Making his directorial debut, Dan Fogelman brings the same layer of complexity and surprise as he always has as a screenwriter, which is to say, not much. His credits include the crass and often difficult to endure Crazy, Stupid, Love., The Guilt Trip, and Last Vegas. His instinct is always for the easy laugh, alternating with the sentimental touch, and so the movie is a series of predictable encounters that drive steadily forward, bolstered a bit by the performances from a cast of veterans.

Even though the script often feels forced or artificial, the actors push it toward credibility. It's stupid, for example, to present Danny as though he can instantly drop his drug addiction after 40 years with a wave of his hand. To counterbalance that, Danny doesn't actually stop drinking, which leaves his renunciation of his past sins muddled, to say the least. Still, Pacino enacts the character in a lovable manner; he may be mugging constantly, but that feels like the type of person that Danny Collins has become.

Cannavale should have already broken out as a major leading man; he can erupt in a volcano of violence or allow himself to be overcome by a tidal wave of tenderness. He's wonderful in his role. Among the smaller supporting players, Melissa Benoist stands out as an awkward and shy hotel desk clerk, and Josh Peck displays strong potential as a parking attendant.

Danny Collins feels like a horse-drawn carriage, clopping its way through a beautiful park without leaving anything of interest behind. It's a long yet pleasant ride, made tolerable thanks to the company of its distinguished actors.

The film is now playing in New York and Los Angeles. It expands to select cities across the U.S. -- including my hometown of Dallas -- on Friday, March 27, before opening nationwide on April 10.