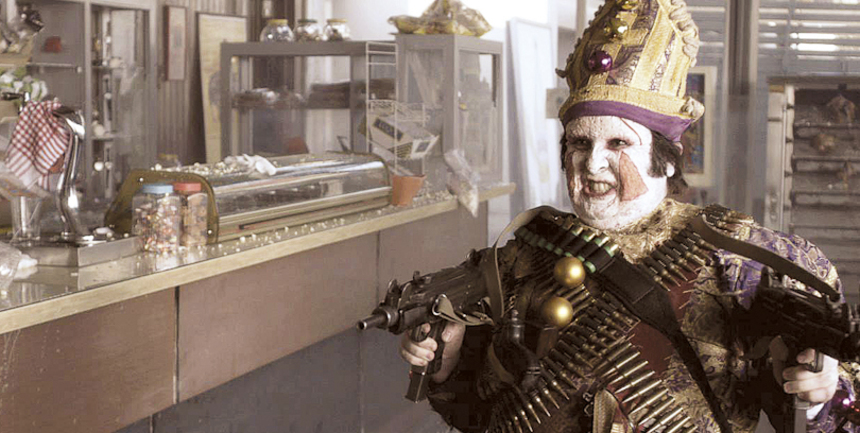 Hey, Toronto! ScreenAnarchy is proud to present Dancing With The Devil - an extensive retrospective of Spanish maverick Alex de la Iglesia unspooling at the TIFF Bell Lightbox. Things wrap up this week with a March 28th screening of his The Last Circus and we want to give you tickets!

Álex de la Iglesia's gonzo allegory about the legacy of the Spanish Civil War is both his wildest and most wildly ambitious feature to date.

Opening with a dazzling title sequence that matches classic horror-movie villains with some of the twentieth century's all-too-real monsters, de la Iglesia's gonzo allegory is both his wildest and most wildly ambitious feature to date. Opening with a prologue set in 1937 -- where an itinerant circus' "Sad Clown" (Santiago Segura) wreaks some impressive havoc on Franco's Nationalist army with a machete before being wounded and captured -- the film then skips ahead to 1973, where the Clown's son Javier (Carlos Areces) has taken on his father's mantle and now plays the Sad Clown in a circus. When Javier falls in love with the beautiful dancer Natalia (Carolina Bang), he comes into conflict with her brutal lover Sergio, the circus' "Silly Clown," leading to a mad apotheosis at the Valley of the Fallen, Franco's monument to "national reconciliation" in the wake of the Civil War. "Brilliant, bizarre and utterly demented ... the jaw-dropping brio of [the film's] execution takes the breath away: resisting its lunatic spell would probably require full-body sedation" (Jeannette Catsoulis, The New York Times).