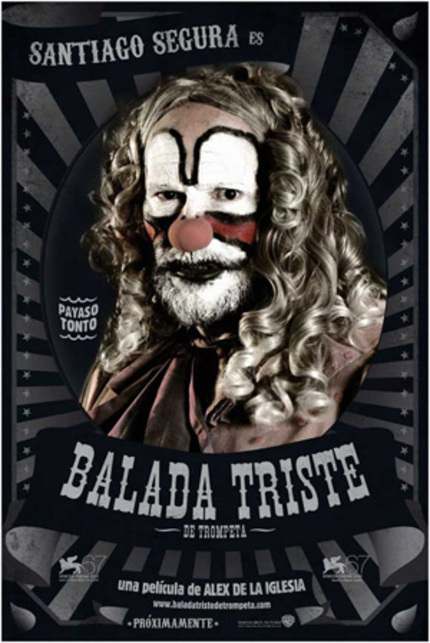 I'd classify The Last Circus as one of the angriest comedies I've had the chance to see recently, with a sense of humor so black that some viewers may have a hard time seeing the joke. This is a film that tears into Spanish history with relish, eviscerating its fascists and revolutionaries alike, all through the vantage point of desperate, grubby circus folk. This is a movie whose mix of gallows humor and gruesome violence may overwhelm some segments of the audience, but I'm guessing that overwhelming his audience was partially what director/writer Alex de la Iglesias (800 Bullet) set out to do.

The movie starts in the 1940's as revolutionary forces, desperate for troops draft all the men from a circus troop, separating young Javier (Sasha Di Bendetto) from his father, a brawny, no-nonsense clown (Santiago Segura). The latter--in full makeup, costume, and curly blonde wig--wades into the fascists, guns blazing and for his trouble gets sentenced to a labor camp. Javier tries to free his father but a cave in results in the old clown's death and the puncturing of the eye of the camp's sadistic Colonel Salcedo (Sancho Gracia), who takes issue with the loss.

Flash-forward to the 70's, and Javier (Carlos Areces) is playing the sad clown to a Sergio's (Antonio de la Torre) happy clown, in an incredibly desperate circus. Of course, their circumstances are a little better than destitute thanks to Sergio, who has a way with making children laugh, while behind the scenes terrorizing the rest of the troupe with his brutal temper. So of course the schlubby, frightened Javier falls for Sergio's gorgeous wife, the acrobat, Natalia (Carolina Bang, whose name seems apt when you see her onscreen).

Sergio brutalizes Natalia and then screws her in a cycle that they both seem to get something out of. As played by de la Torre, he's a beast, someone loosed on this world who will never change, only grow more bitter and finally die. In any other movie, Natalia would be a sympathetic victim, but here she's complicit in the abuse, seeming to get off on not only the apologies by way of rough sex with Sergio, but creating chaotic situations that inflame his anger--like flirting with the totally smitten Javier. A piece of advice, fellas: if she takes pleasure in nearly getting you killed, she'll probably never really be into you.

Ultimately, Sergio delivers the horrible beating to Javier that we knew was coming, putting the sad clown in the hospital. A vivid visitation from his father in a dream causes Javier bloody to retaliation and then escape into the woods where he lives nude, relying on animals accidentally falling into the cave where he takes shelter. From there the movie is about the two men growing more twisted and terrible, with Natalia trapped in between them, leading to their inevitable bloody final encounter.

What keeps The Last Circus from simply being a parade of grotesqueness is de la Iglesias' decision to keep things so heightened and off-kilter that the violence and humor sit easily together. There's a scene in a veterinary operating theater that brings to mind Jack Nicholson's Joker transformation scene in Batman which is gruesome and funny at the same time. There's an extended sequence where Javier finds himself in the hands of an old enemy and takes the opportunity to take sudden, surprising revenge on the then-leader, Franco. Javier also has a transformation scene into crazed, gun-toting clown-ness that kicks the movie up into another realm of madness that feels like a natural escalation of the craziness that came before.

I think the movie worked its spell so effectively because its outrage and outrageousness was ultimately earned as the deliberate result of a filmmaker ratcheting up the circumstances, making the world of his story more strange, bitter, and toxic. It's an immediate classic for me because of its deranged conviction, and I'd invite any of you out there interested in what I've described above to share in it at the first opportunity.

The Last Circus was screened as part of the 37th Annual Seattle International Film Festival. You can find more details at the SIFF site.