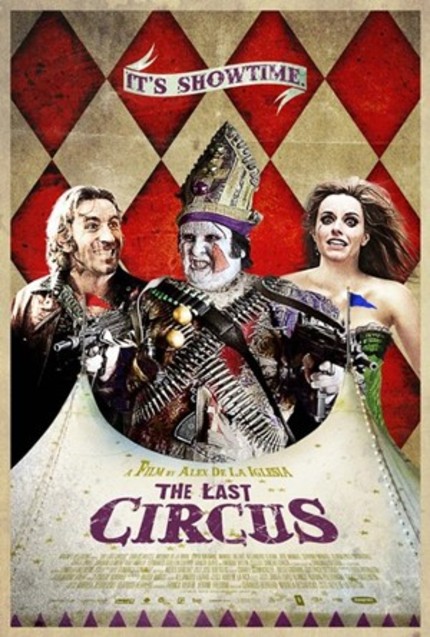 Baroque, absurd and grotesque, Alex de la Iglesia's Balada Triste is a sprawling, epic beast, one that piles image upon image in an often frantic attempt to purge the memory of the Franco era from the system. And though the film becomes a bit of an unwieldy mess at points, unable to fully support the full scope of what de la Iglesia is attempting it still remains one of the most vital and compelling pieces of work in the career of one of the world's most unique and unusual talents.

We begin in a circus, with a pair of clowns - one happy, one sad - on stage entertaining a tent full of excited, laughing children. It's a scene from a happy childhood but it will not last, soldiers bursting in and press ganging every last one of the circus performers to fight in a last, desperate stand against Franco and his men with one of the clowns pulled away to fight before the eyes of his terrified young son, Javier. "Can I at least get changed first?" asks the clown, currently dressed in drag, with a dress and a curly blond wig. Never! "A clown with a machete? You'll scare the shit out of them!"

The battle is epic, brutal and lost, Javier's father taken captive and sentenced to forced labor, leaving young Javier to grow up without parents and without any real childhood.

Jump forward a few decades and Javier, now a fully grown man, is following in his father's footsteps having just been hired on as the sad clown in a local circus. It's a bustling place filled with acrobats and animals and daredevils and pudgy, nervous Javier feels badly out of place particularly when confronted with Sergio, the senior clown with a tendency to become violent when he drinks. Which is every night. Sergio's drinking is clearly a problem but he's the big draw for the circus so what is anyone to do? They certainly can't intervene when Sergio's drunken rages lead him to beat the beautiful acrobat Natalia, with only Javier willing to offer any sort of opposition, however meek it may be.

Soon we find our clowns and the lovely Natalia caught up in a love triangle, one that quickly - inevitably - escalates into a spiral of ever more extreme violence. The metaphor is clear here - Natalia is Spain, Sergio the fascists, Javier the common man - and de la Iglesia pushes it out into ever more baroque and grotesque behavior with the two men ultimately becoming indistinguishable from one another in their capacity for violence and Natalia bearing the brunt of it all while being unable to choose between them.

An incredibly visual film loaded to the brim with images gorgeous, shocking and absurd - often all three at the same time - Balada Triste is a welcome return to the full on visual madness of de la Iglesia's early work after a pair of projects that played things considerably more straight. The battle sequence is as epic as anything you'd find in big budget Hollywood - though Hollywood is unlikely to place an overweight, machete wielding clown in drag in the midst of any of their pictures - while the circus gives de la Iglesia ample opportunity to explore and expand his unique visual language, opportunity which he uses to the full.

As is normal for a de la Iglesia film the script gets somewhat less attention than the visuals, which leads to a bit of a sag in spots, but while the plot may get a bit muddy and unnecessarily convoluted the core intent never wavers and, on the whole, the disparate parts of the film fit together much better than in previous de la Iglesia efforts such as 800 Bullets, which felt like two completely different films living beside one another than one unified work.

Though flawed, the flaws of Balada Triste come from ambition, the desire to jam in as much as is humanly possible, and when you're dealing with a mind as fertile as de la Iglesia's I'll take too much over not enough (ie The Oxford Murders) any day.