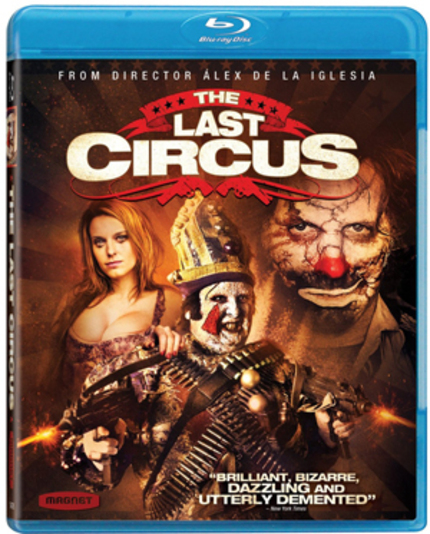 The Last Circus is Alex de la Iglesia's most complete film and a work of mad genius. It takes all of his thematic obsessions and wraps them up in a masterful and epic piece of historical fiction that is so thoroughly Spanish that it is difficult to imagine anyone without a basic understanding of their history could read into it all. I've now seen the film four times; thrice theatrically and once for this review, and I uncover more every time I watch it. I will attempt to dissect the film a little bit in this review, but I'm sure I'll leave a lot of things out.  In any case, Magnet Releasing's Blu-ray edition of the film presents a perfect A/V specimen with perhaps a bit of a weakness in the extras. That is probably more my opinion than fact, but hey, this is my review, so there it is.

Javier, a Sad Clown, finds work in a circus where he befriends an outlandish cast of characters, including the brutish Happy Clown Sergio, who humiliates Javier daily in the name of entertainment. It is here that he meets Natalia, a gorgeous acrobat, and abused wife of Sergio. Javier falls deeply in love with Natalia and tries to rescue her from her cruel and violent husband, unleashing Sergio's jealousy. With neither man willing to back down, this twisted love triangle evolves into a ferocious battle between Sad Clown and Happy Clown, escalating to unbelievable heights in this absurd, shocking, irreverent and unforgettable film.

That is the synopsis on the back of the The Last Circus, and while is accurately enough synopsizes the goings-on in the film, it leaves a lot on the table. One of the brilliant things about this film is that it can connect to the viewer on so many levels. For those who are unfamiliar with the Spanish Civil War and the consequences thereof, the film plays as an absurdly violent and strange drama. For those unfamiliar with the importance and historical significance of the clown in southern Europe over the last few centuries, the inclusion of a pair of clowns as main characters is simply a crazy thing to do. However, both of these inclusions are crucial to the film's success and make it more than just a parade of ultra-violent craziness.

In the bonus material, de la Iglesia says that he began the creative process for the film with the image of a clown with a gun. It sounds crazy, but this is a very potent image. In the 1800's and the first half of the 20th century, some clowns were like rockstars.  Before there was television, there was the stage, and one of the most common traveling stage shows was the circus, and the star was always the clown. In the US, we see clowns as only goofy characters, but in the classic tradition, they are paired.  This concept is explored in a very interesting way in Federico Fellini's The Clowns, which I reviewed earlier this year and I highly recommend as a companion piece to this film. Fellini explains that there was the white clown, known here as the happy clown, and the auguste, or sad clown.  The happy clown makes the children laugh at the expense of the sad clown. To many American viewers, the impact of this dynamic is lost in The Last Circus, however, once you understand this, and the characters behind the facepaint, the film comes together in a much deeper way.

Carlos Areces as Javier, the sad clown, is absolutely fearless in his performance.  His ability to morph from the frumpy, put-upon rookie sad clown in the circus to the clown driven mad is remarkable.  He does everything that his director asked of him, and the film benefits marvelously from his adventurous spirit. He is not only the butt of all of the jokes going on inside the film, but in the first half of the film, he is also the butt of the joke that is the film.  We feel pity and sympathy for him, as he feels pity and sympathy for himself.  As he becomes enmeshed in an unhealthy obsession with the woman who will ultimately be his downfall, we want to shoo him away, as we can see she's no good for him. The key in making his character work, though, is that he sees it, too.  Javier admonishes himself on more than one occasion that Natalia, the lover of the happy clown, Sergio, will only lead to disaster, and yet he is unable, or unwilling to let her go. This spiraling dynamic very realistically leads to his descent into madness and revenge. Remembering the Javier who began the film and comparing it to the Javier that ends the film is a startling thing.

The supporting cast is no less impressive.  Antonio de la Torre as Sergio is an alpha male with a particularly nasty mean streak.  He is a clown because he has no choice, he tells us that if he didn't make the children laugh, he'd be a murderer, and we believe it.  His character is anti-social and borderline psychopathic, but somehow manages by the end of the film to elicit sympathy in small doses. His lover Natalia, played by Carolina Bang, is a tease. She's the kind of girl who thinks she wants someone to treat her well, but keeps getting drawn back to the bad boy. She teases Javier, and uses him to get the affection she can't get from Sergio. It is this tug of war that leaves Javier emotionally shattered, even though he sees it happening, he gets reeled in every time it happens, and in the end, he just can't take it anymore.

The film opens in 1937, as the Spanish Civil War is in full swing and the Republican army of Spain, the official government sanctioned army, was attempting to hold off the Conservative/Fascist forces.  Things weren't going so well, and the film opens with the local Republican army leader conscripting every able-bodied male into service, including those working in the circus.  Here we get our first glimpse of the murderous clown in the face of Santiago Seguro in drag and wielding a machete against a barrage of rebel gunfire.  Seguro plays the role completely straight, which takes it from a potentially hilarious scene to a scene in which he is genuinely frightening. Shortly thereafter, the Republicans have lost the war and Seguro's clown, the father of Javier, is held up as a symbol of the defeated government by the Fascists. He tells his young son that he must be a sad clown, because there is nothing left to be happy about, and that his goal should be vengeance. Javier takes that bit of advice to heart, and proceeds to seek vengeance against everyone and every thing that has made his life the way it is.

We flash forward about thirty years, and Spain is now completely under Franco's thumb, though to the outside world, you wouldn't know it.  De la Iglesia helpfully throws in a montage to help the unfamiliar viewer understand the political climate, but it isn't terribly explicit, and could lead to confusion.  The montage is helpful in setting up the analogy between Spain, as a Fascist state with a glossy image, and the clowns, as human and at times vicious people with smiles painted on their faces. The film takes place in the final few years of Franco's regime, and it is at this time that the anti-Franco forces and rebels begin to get desperate, resorting to acts of terrorism and violence in order to unseat the Generalissimo. Similarly, as Javier becomes more and more desperate and less stable, his actions become less predictable and more violent. He replaces his painted face with a permanently scarred face as a way of more accurately reflecting his inner turmoil. He attacks the oppressive forces in his life, all of them, finally taking heed of his father's demand for vengeance.

Javier's ability to sublimate his own desires and his ability to stuff his pain and anger has finally failed.  Spain's ability to appear like a wondrous paradise to the outside world due to Franco's very precise management of his nation's public appearance was beginning to crumble as the new rebels needed to make a splash. What was a crazy film about a clown with a gun is now a masterful allegory about the dangers of sublimation and the potential evil of accepting things at face value.  Sergio is another analogue to Spain, with his painted smile and evil soul, these analogues are everywhere.

So yes, it is easy to appreciate The Last Circus as "brilliant, bizarre, dazzling, and utterly demented", as the New York Times Jeanette Catsoulis did, however, in doing so, you shortchange the film for its true brilliance. It is all of those things, but it is so in service to a greater story. The Last Circus is a film that is so firmly rooted in the Spanish identity, that I still find it incredible that it is Alex de la Iglesia's best received film on these shores. He tackles many of the themes in The Last Circus in his earlier works. The theme of disfigurement and beauty is central in his debut film, Accion Mutante; the references to clowns are evident in both The Perfect Crime and Dying of Laughter; the paranoiac tendencies of his characters in The Last Circus mirror those of the characters in Common Wealth; the focus on performers who are part their prime, like his clowns, is central to the story of 800 Bullets; and so on.

In The Last Circus, Alex de la Iglesia has managed to coalesce his entire filmic philosophy into 100 minutes of sheer genius, demented or not, and it is a thing of insane beauty.  My biggest hope for this film is that is encourages the film fans of the world to seek out his earlier work, which has been unjustly ignored by the United States. Perhaps we can even get a decent edition of his previous masterpiece, The Day of the Beast on DVD or even *gasp* Blu-ray in the US or even the UK.  That film has not been seen by nearly enough people and it is ripe for rediscovery. Buy this film. Watch this film. Read about the history. Watch The Clowns. Then watch this film again, and again, and again.  I promise you it will never get old.

Oh yeah, this is a Blu-ray review. Well, The Last Circus was shot digitally, so everything that Alex de la Iglesia wanted is right there on screen.  No dodgy film transfers to worry about.  The soundtrack is awesome, the music is great, and there is great directionality, especially in the opening battle sequence. Couldn't have asked for more.

The extras are Magnet's typical EPK stuff, but that's not bad.  It looks like the extras are ported over from the Spanish release, a 15 minute making of doc, a few behind the scenes segments totaling about the same, and 10 minutes of before/after VFX shots.  All worthwhile and they won't take all day to digest.  The VFX in the film are mostly very well done, the finale gets a bit weird, but only because they are used to extensively.  Still, by that point in the film, if you aren't engaged enough to look past that, you're doing something wrong.

Magnet Releasing's Blu-ray of The Last Circus is great, and not just because the film is so good.  Definitely recommended, go buy it now.

Pre-order The Last Circus on Blu-ray at Amazon