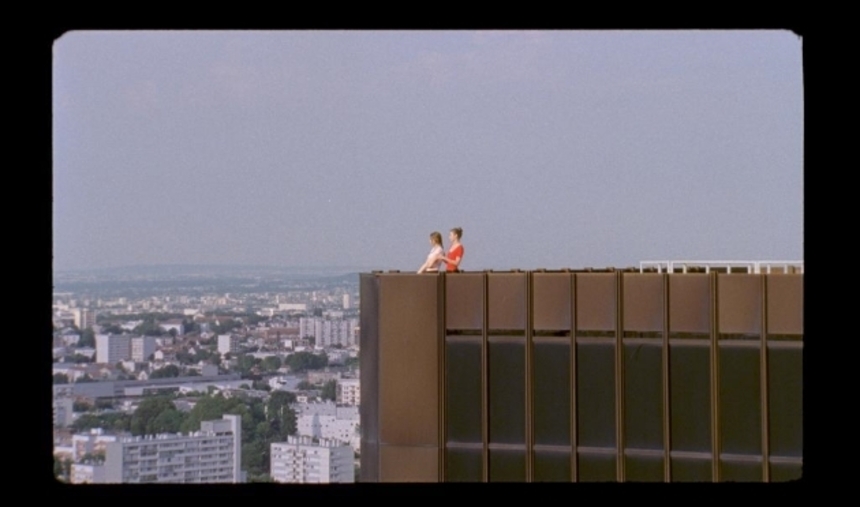 The film starts with a young black man getting a tour on the first day of his job as security personnel in Les Mercuriales, the twin skyscrapers, which eerily resemble the World Trade Center, situated in an industrial neighborhood in a Paris suburb. Before we get accustomed to the young man, the film's focus shifts to a group of scantily dressed young women. They talk about normal things while they wait (for interviews?). They might be seeking jobs in various areas throughout the buildings - as casino workers, hostesses, receptionists, etc. There are some hidden seedy aspects to these prolonged proceedings. The whole sequence is quite seductive yet unnerving.

Then we are slowly introduced to two pretty girls - a French girl, Lisa (Ana Neborac) and Joane (Philippine Stindel), who's from Moldova. Their pasts are revealed in casual conversations. They become best friends.

Virgil Vernier, known for his documentary work, here attempts at his first full length narrative feature with Mercuriales, a loose narrative with documentary aesthetics. There is not much of a story here: the girls share stories of their pasts, their fears and hopes and dreams.

The film can be seen as a fairytale - sort of Little Red Riding Hood in a concrete jungle. As Joane's discordant voice over tells a Moldovan folktale about sisters, the girls navigate around their drab surroundings in their daisydukes when they are not working: The walls covered with graffiti, ugly crumbly housing projects, underlit overpasses and alleys. Grainy, dark images of the city scape evokes loneliness, isolation but there are is a lot of visual poetry in it too.

Things take a different tone when the girls take off to Lisa's grandparents' secluded old house for a getaway. Vernier unhurriedly shows the budding friendship between two girls from a different background as they share a bed and take baths together without delving into cheap titillation.

There they seduce a boy to score some dope and mingle with the local teens at night. There is a just-under-the-surface sense of danger and depravity prevailing throughout the film, as explored in the seedy lives of strippers in his medium length film Oléans, with a glimpse into a hardcore sex club and a hint of Eastern European sex trafficking.

There are a lot of similarities in Vernier's work and other, more established contemporary directors whose work share the same theme: urban loneliness, isolation and rootlessness - Ulrich Seidl (Paradise Trilogy, Import/Export) Angela Schanelec (Marseille, Orly), just to name a few.

While Vernier's visual approach lacks the elegance of formalist aesthetics of these veteran directors, the real difference is in the depiction of his characters. However insipid their lives and aspirations are, Lisa and Joane are treated with much compassion. The girls don't come across as some pawns in a mysterious game or as the butt of a joke. The film still maintains its enigma as a whole without sacrificing its characters.

Mercuriales is daring in a lot of aspects - the mix of narrative and documentary form, the sudden shifts of focus, change in tonality, tinkering underlying tension and violence, etc. I am very much looking forward to Vernier's future endeavors.

Mercuriales plays part of New Directors/New Films 2015 at FSLC on 3/22 and at MoMA on 3/26. For more info, please visit ND/NF website.

Do you feel this content is inappropriate or infringes upon your rights? Click here to report it, or see our DMCA policy.
Mercurialesnd/nf 2015new directors new filmsVirgil Vernier