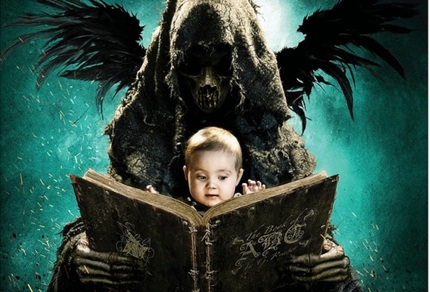 I'll be honest. When I first heard that substitute teacher Sheila Kearns was facing criminal charges for showing anthology horror project The ABCs Of Death - a project on which I am an associate producer - my response was one of curious incredulity.

That a 58 year old substitute teacher even know about this film was somewhat surprising, for one thing, and that she'd be foolish enough to show it multiple classes of high school students was surprising on a whole different level.

The film's a lot of things, but educational? That's a stretch. But, really, the big reaction came from the prospect of legal consequences? They can't be serious, can they? Do the courts really have nothing better to do than press criminal charges against a woman for showing a film that premiered in one of the world's largest and most prestigious film festivals (The Toronto International Film Festival) and is widely available in shops, on iTunes and VOD services around the world? Well, apparently not, given that late yesterday word came down that Kearns is facing a 90 day jail term for showing the film.

I'm conflicted on this on a number of levels.

First of all, as a producer I'm proud of the film. When the project was conceived we envisioned something that would give creators complete creative freedom and we delivered that. Some chose to be transgressive and push the envelope of good taste. Some delivered bitingly funny pieces of comedy. Some delivered pieces that are strangely beautiful. And some delivered pieces that, frankly, individual producers didn't care for all that much but the mandate was freedom for creators and we treasured that above all else and so they all went in.

The result is a big, chaotic mess - inevitable when you give 26 directors total control over their own work - but exactly the sort of mess that we hoped to make, and something that was widely embraced by festivals and audiences around the globe.

That said, I'm also a parent to two children - a nearly 14 year old boy and a 9 year old girl. And these children will never see this film by my doing, not by my hand and / or not until they are significantly older. It was not made for them and is not appropriate for them.

This is why we have ratings boards - the film is rated R here in Canada, and absolutely correctly so - and those guidelines should have been respected. That Kearns didn't recognize that she was doing something out of line - and wildly so - is baffling. Outrageously so given that she showed the film to multiple classes throughout the day and then tried to base her defense on not knowing what was in the film.

Parents SHOULD be outraged by Kearns behaviour here. The film wasn't made for school viewing and should never have been shown there. As a parent, I would have been every bit as angry as the parents of Kearns' students had this film been shown to my children without my advance knowledge and approval and I am personally in full support of Kearns being fired for doing so. It's a monumental and phenomenal lapse of judgement.

But jail time? Really? That's just insane. Kearns did something stupid, not something criminal. In a world where those convicted of assault and other serious, violent crimes often never see the inside of a cell this woman is going to spend ninety days there for showing students a film that any one of them could have legally rented or purchased on their own? That's madness.

This case just strikes me as failure compounding failure, with Kearns' original failure of judgement being compounded by an even more egregious failure in the courts. I'm amazed it wasn't thrown out before it got to the judge and doubly so that the judge didn't have the good sense to throw it out the moment it got there. Remember that old 'two wrongs' saying? That very much applies.
Tweet Post Submit

Do you feel this content is inappropriate or infringes upon your rights? Click here to report it, or see our DMCA policy.
abcs of deathjailsheila kearns

More about ABCs of Death