Review: WHAT WE DO IN THE SHADOWS, An Incredibly Funny, If Slightly Bloody, Romp 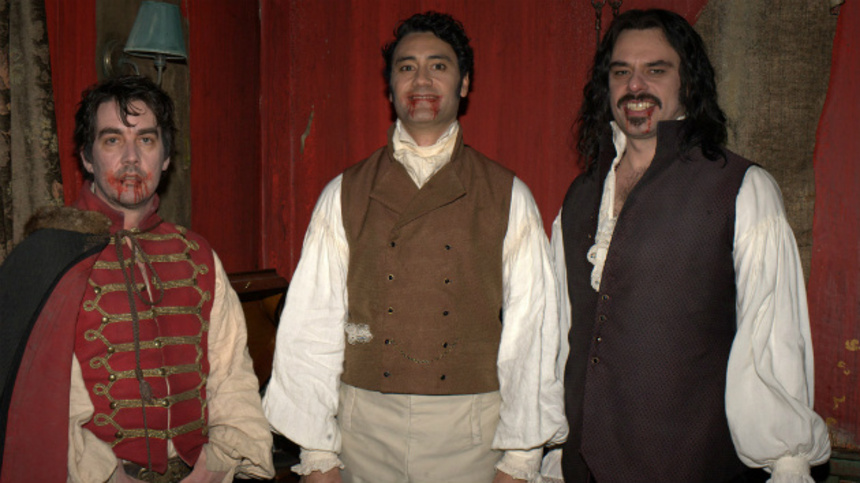 From the opening title card that reads "New Zealand Documentary Film Council," it's pretty clear that What We Do in the Shadows is not going to be your typical vampire movie.

Co-directed by Taika Waititi (Eagle Vs. Shark, Boy) and Jemaine Clement (of Flight of the Conchords fame), this story of a group of vampires living together in Wellington, New Zealand is part This Is Spinal Tap and part The Real World. What it definitely is, however, is all funny. Based mostly on improvisations, this mockumentary showcases the talent of some of New Zealand's most hilarious comedians and is sure to have you laughing until you bleed.

Set mostly in an old mansion, the vampires take turns talking to the camera in good reality TV-show style. Taika Waititi plays Viago, the 379-year-old responsible one of the flat. Jemaine Clement is 862-year-old Vladislav whose once mighty powers have been quelled by recent defeats. The messy youngster of the group is Deacon (Jonathan Brugh) who is a mere 183-years-old. The cast of characters are rounded out by the 8000-year-old Petyr and a few humans who interact with the vampires, most mainly as snacks.

Though there is a rough plot that involves Petyr turning an annoying young man into a vampire and the new vampires human pal, the majority of the film is just opportunities for these hilarious comedians to riff. There are also plenty of practical and visual effects gags such as the vampires hovering or walking up walls (Peter Jackson lent a big hand to the production and is the first thanked in the credits). Rhys Darby (Murray from FotC) also makes a fantastic cameo as part of a werewolf gang that feuds with the vamps.

What We Do in the Shadows is an incredibly funny film. It doesn't redefine the genre and not every gag is a home run, but there are enough singles and doubles here to make this a movie that can be revisited for plenty of laughs time and time again. Most importantly, it is just fantastic to see these hilarious filmmakers creating. If we can get more comedy out of them, the world will be a much funnier (if perhaps slightly bloodier) place.

What We Do in the Shadows