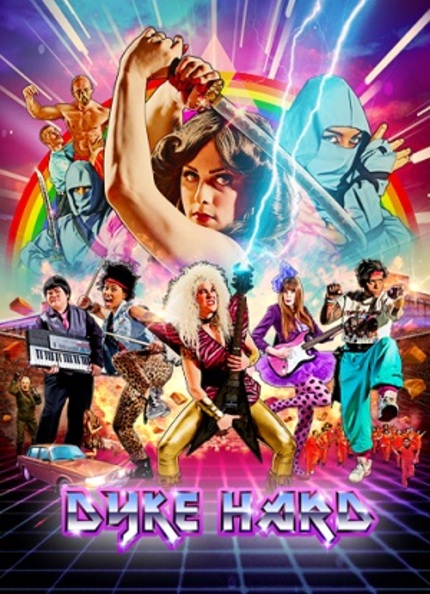 The Berlinale belongs in the triumvirate of most followed film festivals, eagerly pushing its fingers on the pulse of world cinema. As such, it brings a vast variety of oeuvres from all over the globe dubbed as arthouse films. Many of them, however, wield a commercial potential, most notably in the Panorama section aimed at film buyers. A few brows furrowed upon seeing Swedish film Dyke Hard among the official selection, acknowledging its affiliation to cult genres and B-movie forerunners.

The film originally came into existence as a fake trailer, an effort from customers and the shop keeper of a feminist/LGBT bookstore, who together made the amateur TV show HallonTV. The sudden interest in the trailer prompted creators to consider a feature format. Eventually, the project was on the go, backed by the help of Stockholm's queer community, and took 400 people and 4 years to finally appear in its full unabashed beauty. Comic artist Bitte Andersson, who is the abovementioned shop keeper and once was a special effects artist in Troma Entertainment, sat on the director´s chair, with the intention to make an exam-work. Yet it somehow evolved into a bigger romp under the banner "Trash as trash can!", which Dyke Hard holds high and proudly.

A couple of bullied (and evidently not so popular) girls form a lesbian music band, the eponymous Dyke Hard, with a bully as the lead singer. After the initial stir around their first single hit "Payback" settles down and wears off, and the last venue boos them off the stage, the band´s inevitable demise appears on the horizon. The aggressive and abusive lead singer Riff (Lina Kurttila), who dons an anachronistic glamour costume throughout the film, jumps the sinking boat, as she has little or no respect for her band-mates, considering them merely chain and ball to her wondrous solo career. To add insult to injury, somebody torches the band´s caravan overnight while their manager renounces them. A spark of hope arises in an impending "The Battle of Bands" competition, where Dyke Hard aspires to restart their vanishing fame.

Dyke Hard looks like a mighty blast from the past, as many (s)exploitation and B-class jewels are channeled through a nostalgic séance. The constantly defiling references seem to build a frivolous celebration of low-brow humour and dubious taste, in a no-holds-barred modern pastiche. It's a homage to the genres from lower echelons, though these are enjoying no less idolatry by their pack of stalwart followers. For example, a first stop on a zany road trip, with the lesbian rockers in a ramshackle Volvo, leads to a haunted house. Although there is no Tim Curry in lingerie to welcome the dear guests, the glaring Rocky Picture reference is hard to miss. The spooky mansion singalong takes a bit longer, though the performance is worth the wait. A singing lesbian ghost residing in the ruin, Morgana (Ylva Maria Thompson), confesses her insatiable post-mortem carnal desires, of which she was deprived during her lifetime. The anecdote about forced absence disposes produced smirks, yet the tune does not crawl under the skin as much as the catchy paean on juvenile satyriasis from Richard Kelly´s opus magnum Southland Tales did. The verbal depiction is only a cherry on top, as the lost soul´s girl-on-girl action with one of the living band mates precedes the musical performance culminating into a rigor mortis climax. Fun, and little regard to political correctness, seem to be the only conditions used in sewing together this Frankenstein's Monster of a movie.

While it proclaims the holy mantra "Trash as trash can!", and the denomination of John Waters as a spiritual father, only minuscule amount of gross-out scenes or gags appear, and none of them test the gagging reflex. Thankfully, bad taste for once doesn't mean fountains of vomits. The micro-budget production value clearly shows, and Bitte Andersson (as a Troma alumni) doesn't hesitate to throw in more cheesy effects serving the right purpose. The amateurishness is always part of the game, and the film´s intentional gimmick, never a result of the lack of talent, skills or judgement. Despite licentious unrestrained gaiety, the admirable amount of collective work, enthusiasm and a hefty dose of positive naivety, all count among the building blocks. Especially the naivety must have been the towing vehicle, naturally next to strong dedication and believing in the cause, as it translates into the film nimbus in the most positive sense. The director revealed that the film doesn't have an ironic bent, but stems from 80s attitude, where friendship is magic, which is one of Dyke Hard´s leading themes.

The bell tolled for midnight movies a long time ago, yet there is always enough space for a zany action comedy musical extravaganza. However, the nostalgic multi-genre pastiche of cult and B-movies shelters another layer, as the Stockholm LGBT community´s involvement is not an irrelevant remark. The LGBT agenda is in many European countries still a hot issue, and cinema properly reflects it, such as award-winning Something Must Break by Swedish filmmaker Ester Martin Bergsmark, which toured the festival circuit last year. Andersson admits that LGBT films exist, though they are more concerned with serious issues, and she, along with her team, felt a shortage of like-minded escapist endeavours, a state she aims to reverse with Dyke Hard. At the same time, it´s a sign of the demand in LGBT communities, not just a trivial revelation, and maybe also an emergence of a new trend. More political statement dwells in evading the prevalent hetero-normativity and applying the counter norm, yet not in a manner that would nail the whole film deep into LGBT ghetto, while scaring away non-queer folk. Dyke Hard is made by queers, about queers, albeit not exclusively for queer audience. In all the unrestrained midnight madness, does the polymorphous picture miss something? Definitely more singing and dancing, Bitte Andersson and her team know how to stir the party up.

Just get on the bike, dyke!