Sundance 2015 Review: ME AND EARL AND THE DYING GIRL, More Clever Than You Think 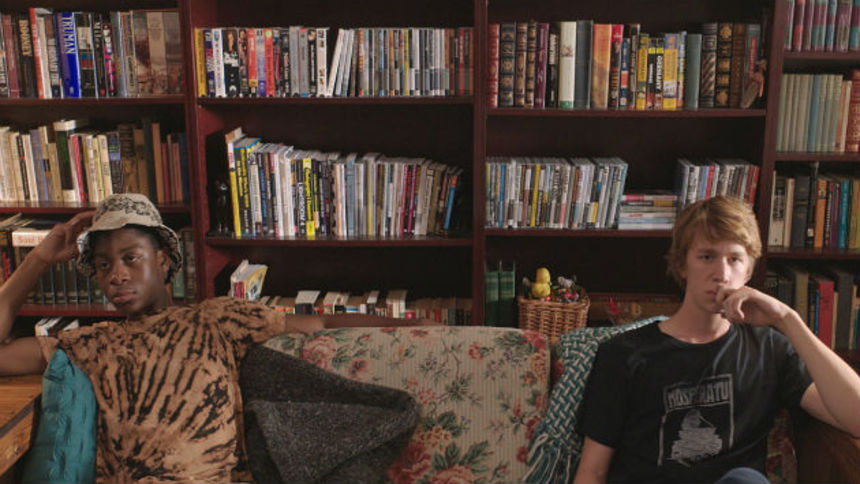 The title for Me and Earl and the Dying Girl is kind of appalling, a sing-song rhyming cadence that reminds of Lobo's buttery 1971 pop hit "Me And You and a Dog Named Boo". Its premise -- a young girl getting cancer who is cheered up by a precocious outsider teen who with his friend recreates scenes from movies -- sounded like it'd be a mash-up of Be Kind, Rewind and The Fault in Our Stars.

There was no way this was going to be good.

And yet director Alfonso Gomez-Rejon and screenwriter Jesse Andrews proved my prejudices to be completely unjustified. For this film isn't just good, it's amazing. This isn't just a kid-with-cancer movie for film nerds, this is a sublime love letter to the Criterion collection, and the best riff on Harold and Maude since Rushmore.

Thomas Mann is the "me" of the story, Greg Gaines, and he's terrific, a mix of sardonicism and pathos that's entirely believable. Considering he's the guy who got his start from the cinematic abortion that is Project X, this role manages to redeem his career in dramatic fashion. Mann anchors the story, both narrating it and providing much of the dramatic thrust. Earl, played by Ronald Cyler II, has a far more archetypical role; he's more of a foil for Greg along the way. Olivia Cooke (Bates Motel, the upcoming Ben Hur redux) plays said dying girl Rachel Kushner, who is diagnosed with stage-four leukemia. The story sets off when Greg's mom forces him to spend time with his acquaintance after her diagnosis, and a reluctant friendship blossoms into something far deeper.

Even in writing out this description, it sounds maudlin and silly, yet there's a magic trick played by Gomez-Rejon with this film. It's a combination of a truly witty script, performances that never veer towards the obnoxious, and a spirit of both light and dark that combine to form one of the more affecting and effective movies I've seen in a long while.

There are a slew of exceptional supporting performances, from Saturday Night Live veteran Molly Shannon to Nick Offerman, Connie Britton and John Bernthal, that adds tremendous colour to the story. Shannon hasn't had a chance to mug like this in years, and it's refreshing to see her brand of weird fit so well into the storyline. Similarly, Offerman's laconic delivery is as perfectly employed here as the Sociology professor / father to Greg as J.K. Simmons was used in a patriarchal fashion in Juno.

The music makes a few overt references to Hal Ashby (even the pet feline is named "Cat Stevens"), but given that the film is littered with references to Martin Scorsese, Werner Herzog and more, this is all part of the show. This truly is a film geek's paradise, with clever and witty allusions or even complete recreations of moments from Burden of Dreams and the like.

Despite all its allusions to other films, Me and Earl and the Dying Girl isn't simply some obnoxious pastiche. There's a great sophistication to the storytelling, particularly towards the end, where Gomez-Rejon is impeccably judicious in how he teases out the story.

A few weeks before I saw this film, I watched Harold and Maude for the first time in about a decade and was surprised about how sophisticated that film feels even today. One of the major reveals of that film is held on screen for less than a second, and its performances are the perfect blend of arch and believable. The same kind of filmmaking is used by Gomez-Rejon, sometimes employing clever cuts or even narrative duplicity to keep audiences guessing, making them unsure that what's telegraphed as transpiring is really going to happen.

There's no better praise I can bestow upon Me and Earl and the Dying Girl than to say I think it would make Ashby proud. It's one of the funniest, cleverest, most heart-wrenching films I've seen in a long time, an absolutely delightful movie that earns every single one of its emotional beats.

Me and Earl and the Dying Girl

Do you feel this content is inappropriate or infringes upon your rights? Click here to report it, or see our DMCA policy.
Alfonso Gomez-RejonSundanceSundance 2015Jesse AndrewsThomas MannRJ CylerOlivia CookeNick OffermanComedyDrama

More about Me and Earl and the Dying Girl