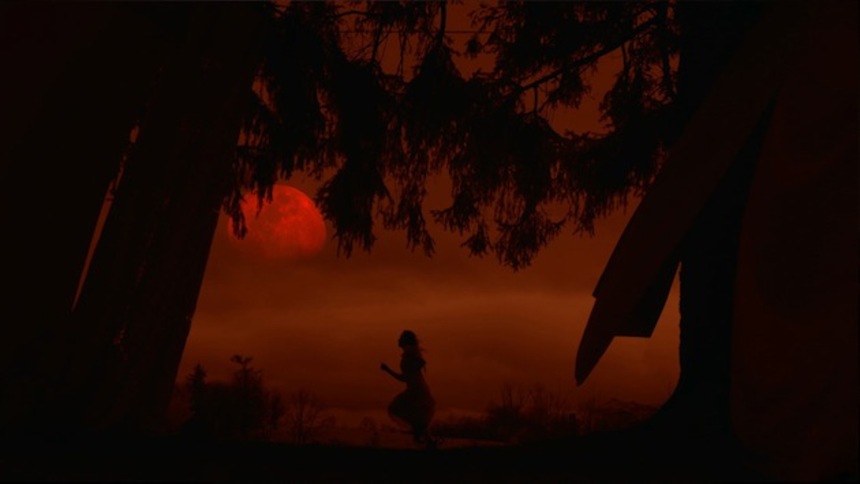 Hellions, Journeyman director Bruce McDonald's first foray into horror since 2008's slow-cooker Pontypool, is a maelstorm of horror traditions and tropes, good and bad alike. While the film is never boring for its constant barrage of evocative imagery, cacophonous score and sound design, McDonald and writer Pascal Troitter are never able to marry such bombast with their intended themes around motherhood, teen sex and abortion.

Chloe Rose (from Canada's popular Degrassi: The Next Generation) stars as Dora, a high school senior who, on Halloween, discovers she's pregnant. Unsure of how to tell her boyfriend, Dora's plans to spend the night with him at a party are cancelled when that night's abnormal blood moon rises, unleashing a phantasmagorical storm across her family's farm, which is followed by a legion of strangely costumed trick r' treaters that demand "blood for baby". Robert Patrick pops up as the town's grizzled sheriff who has seen this all before. The demon-spawn kiddies take a page more from Leatherface than the children of the corn in their approach to terror. Their look is a patchwork circus-gothic vibe that may be the movie's most original and interesting element.

Once the film gets past the first act and its painfully on-the-nose exposition, McDonald is able to open up his full bag of tricks, which includes tinting the entire picture in a strangely saturated violet-white light and blasting the soundtrack with a choir of children. Influence is felt far and wide from early Cronenberg flicks, to Romero and even Jean Cocteau levels of surrealism. Call it Something Wicked This Way Comes To Rosemary's Baby on Halloween, there is nothing subtle about Hellions.

And while that may not always be a detriment, the filmmakers are so busy throwing everything but the kitchen sink up on screen to little effect. McDonald's penchant hard core energy is felt throughout, which may tickle some audiences, but I was left consistently bewildered by the film's determination to crank itself up to 11 and just stay there. And this is a movie that features Cthulhu-like fetuses, mind you.

True to his chameleon nature, perhaps it's just that McDonald wanted to go the complete opposite direction with his next genre film after the creepy cool of Pontypool. Which is fair... And Hellions is something completely different, but that something is nothing more than some middling monster munchkin mayhem.

Do you feel this content is inappropriate or infringes upon your rights? Click here to report it, or see our DMCA policy.
bruce mcdonaldchloe rosehellionsrobert patrickSundance 2015