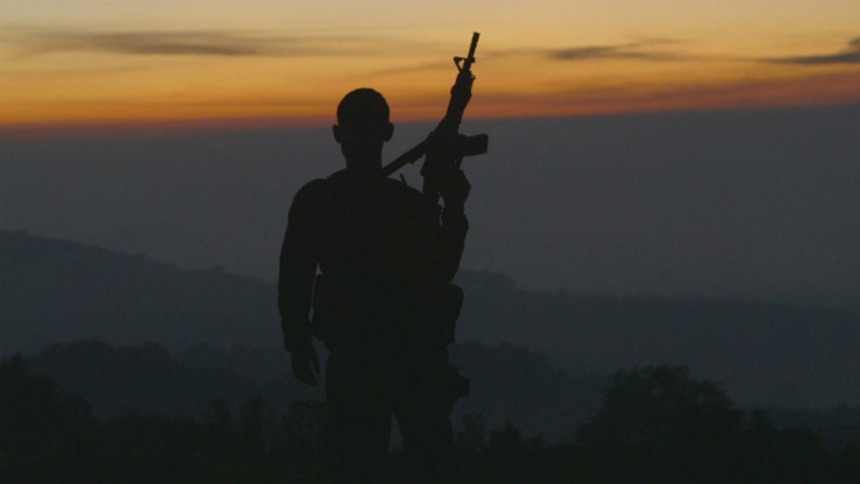 An astonishing journalistic achievement, Cartel Land captures in unprecedented ways the moral quagmire that inexorably links the consumers of drugs in the U.S. with the suppliers south of the border.

What sets this film apart is the unique way it presents what at first appear to be dichotomous groups: the right-wing, anti-immigration, vigilante militias massed on the U.S. side that are poised to protect their cities from an influx of what one individual calls "impurity", and similar groups within the province of Michoacán, who rise up to rid their communities of the nefarious cartel dubbed the Knight's Templar.

The binary divide is set up from the beginning. Right-wing, Fox News-championing white folks talk about keeping the races apart, like a fence between pit bulls, and the Robin Hood-like bands of regular community members arming themselves against the corruption and strife caused by infiltrators in their midst. They represent two kinds of vigilante justice, with very different motivations and desired outcomes, and a dialectic that's both compelling and revelatory.

Yet life in Cartel Land is much more complex than any black or white divide, and the film brilliantly follows the trajectory of the story down a path that's as shocking as it is nihilistic. With sequences right out of a war film, we see gunfights, torture and night raids play out in a strange game of playing soldier.

In Arizona's Altar Valley, a crew of cammo-wearing, assault rifle-carrying men and women carry out patrols. Using sophisticated equipment, including night-vision goggles and encrypted radios, they seek out those looking to cross into the U.S., apprehending them, and then calling the border authorities. As they tell it, they believe they are preventing a disease from infecting the body of their country, and they are the closest thing to an immune system.

And in Mexico, we see door to door raids followed by the beating and kicking of those who are apprehended, the punishment rendered by vigilante and police alike. It's a ghastly thing to see, yet the images are just the tip of the circles of violence that permeate the area. The true horror begins to creep in when it's recognized that, rather than ridding the area of thugs and murderers, it truly is a case where one group simply subsumes the control and depravity of another. It's this escalation of horror, where even the institutions and citizen groups become tools for violence and destruction, that is the most gut-wrenching aspect that the documentary captures.

One of the film's most powerful moments is when one of the vigilante leaders in Mexico is confronted by a local, demanding that he subsume his power to the rightful authorities, declaring that the state forces are the only ones who should be tasked with the protection of the community. It's the collisions between these ideals and the reality on the ground that brings the film its most emotionally impactful moments.

With two charismatic central characters in Dr. Jose MIreles and Tim "Nailer" Foley, the film presents both narratives with sensitivity and complexity. There are also moments of tremendous beauty captured, lush southern sunsets with the silhouettes of gunmen against the amber sky.

This is a film that's both timely and timeless, an examination of what appears to be an unassailable cycle of awfulness, as showcased recently by the murder of dozens of school girls in a neighbouring province. Matthew Heineman's film feels like a peek into a gaping maw of wretchedness, one where even the white shirts are co-opted to feed the insatiable demand for the illicit product. When even meth cookers provide eloquent articulations about the ambivalence of the situation, an infernal cycle of poverty, corruption, power, greed and insatiable lust for intoxicants, you know that life in Cartel Land is very bleak indeed.