San Cristóbal De Las Casas 2015 Review: ALL OF ME, Focusing On The Human Side 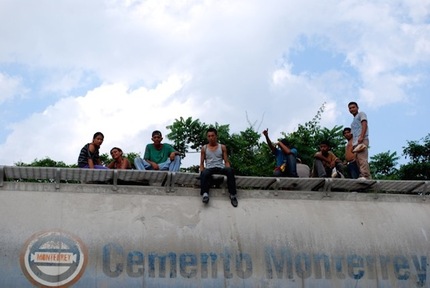 All of Me (aka Llévate Mis Amores) is a documentary that deals with a well known subject - the illegal immigrants from Central America, recently portrayed in Diego Quemada-Diez's successful narrative film The Golden Dream - but that manages to present a unique perspective.

Set in the town of La Patrona, in Veracruz, Mexico, All of Me kicks off as an exploration of the local people. It's told from a female point of view, indicating right from the beginning that the protagonists are a group of strong women who are mostly alone. If they have a supportive male partner, it's very likely that he works outside the house all day; and if they don't, it can be because they have been already left behind.

From the several stories shared, it's fair to say the older women are worried that the younger ones are making the same mistake they did in the past, which is leaving their studies and dreams for a man. There's obviously a general sense of machismo, and a specific case of a girl in her early twenties proves nothing seems to be near to changing. She has already more than one baby and the alcoholic father had left for the United States before returning and getting killed during a heated, possibly drunken argument.

This, while certainly interesting, might not be entirely revelatory for someone who has been there or seen films about the rural side of Mexico (not saying the bigger cities are exempt of similar situations, though). But what's more vital is how the story of this group of women, known as "las Patronas," is two-fold. Since 1995, they have also been involved in helping immigrants from Central America, who travel illegally on board a train that passes everyday through their town.

The "Patronas" are a little sunshine for those immigrants, as they gather food and water for them and also offer shelter for those who, for one reason or another, need to stay in the town. As you can tell, the "Patronas" can easily relate to the Central America immigrants, as they themselves have had thoughts of trying to go to the United States seeking a better life or have been, indeed, involved with men who did go to the U.S.

All of Me has a true impressive sequence when it exposes for the first time what this group of women do every single day. It's meaningful but also quite intense; they go as near as possible to the train and give the immigrants bags with food and bottles of water. It's not the easiest task, since the train never stops and usually travels fast; hence the commitment of the women is never questionable. Eventually, the documentary will feel a little overlong, and this sequences start to become repetitive, but the fair thing to say is that is doesn't just offer the great footage of the "Patronas" in action.

While there, the skillful film crew was fortunate and/or perseverant enough to capture, for instance, when one of the immigrants fell off the train. We then have a glimpse of who this guy is: a 24-year-old kid from Honduras with nothing but dreams of a better life. All of Me is basically saying, forget politics and nationalities at all for once, and let's focus on the human side of this whole problem. These immigrants are exposed to many things, from the police to kidnappers, and really they are just human beings that, given their situation, will always need any kind of help offered.

It's also quite striking to see what's inside the head of the women that help regardless of their own problems. Not all of the "Patronas" are recognizable at the end of the doc -- there are around 15 women -- but the stories of some of them, sometimes related to Jesus Christ and God, represent very well the impulse behind their actions. If All of Me is a display of the horror of being away from your family, in an extremely dangerous and vulnerable position, it also proves that having a human being helping another human being is still something that happens in this world.

Do you feel this content is inappropriate or infringes upon your rights? Click here to report it, or see our DMCA policy.
All of MeChiapasLlevate Mis AmoresMexican CinemaSan Cristobal de Las Casas

More about All of Me (Llevate Mis Amores)