LOVE AND PEACE: Watch This Manic Trailer For Sono Sion's Next 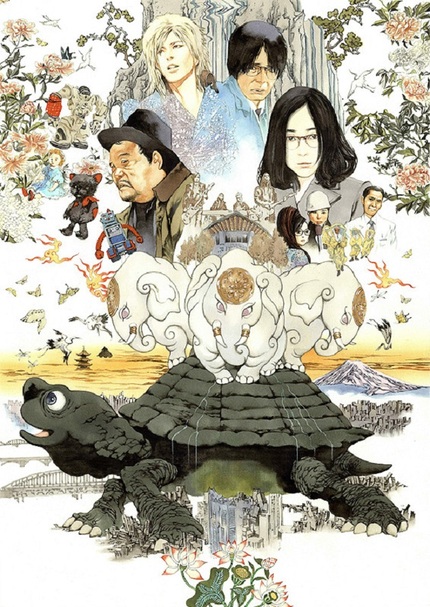 First, I love love love this poster for Sono Sion's upcoming Love And Peace. Want.
Second, to call Japanese director Sono Sion prolific is a gross understatement. Why Don't You Play In Hell? got Stateside distribution thanks to Drafthouse Films and will be released on Bluray next week. And Tokyo Tribe tore up the festival circuit this past Fall. If he keeps it up we could be at a point where we announce a new film every month; but in reality the maverick director is good for at least one dose of cinematic madness once a year.
Which bring us to one of two flicks the director has planned for 2015, Love And Peace. We have the first trailer to share with you and if you can keep up with the editing it looks every bit as crazy as we have come to expect from the director.

In the summer of 2015 in Tokyo, Japan. Ryoichi dreamed of becoming a punk rocker when he was younger, but became a timid salaryman at a musical instrument parts company. He has feelings for Yuko, but he can't tell her how he feels..
One day, he has a fateful meeting with a turtle on the rooftop of a department store. He names the turtle Pikadon and he adores it, but his co-workers laugh at him. Ryoichi throws Pikadon into the toilet. He regrets what he did. The turtle though goes through sewerage and meets an old man who lives in the underground. Something then happens.

Is that some Kaiju action going on there at :28? Love And Peace will release in Japan this Summer. Sion's second film Shinjuku Swan is being released in the Spring.
Sign-In to Vote
Tweet 0 Submit

Couple of FYIs on this one: Sono shot LOVE AND PEACE a while ago, before TOKYO TRIBE if my memory is correct. No idea why it's been held so long for release, but it's not due to reshoots or any problems.

Also: the Special Effects Director on the film is Kiyotaka Taguchi. He's being credited right alongside Sono on the posters (in Japanese, obviously), so clearly is a big part of the production. Taguchi is a kaiju whiz. He made the indie film "G" on his own, and also LONG-HAIR GIANT MONSTER GEHARA as part of a TV contest. He's worked on TV series ULTRA ZONE, NEO ULTRA Q, ULTRAMAN GINGA and MM as a director and/or spfx supervisor, directed a (great) segment in the ABCs of DEATH knockoff FOOL JAPAN: ABCs of TETSUDON, and most notably for overseas viewers, did the kaiju scenes and f/x in ABCs of DEATH 2 director Hajime Ohata's short film HENGE! He's a real talent and his name deserves to be better-known.

Thanks for the additional info.

Tokyo Tribe wrapped in late September '13 and Love and Peace went into production in November of that year.