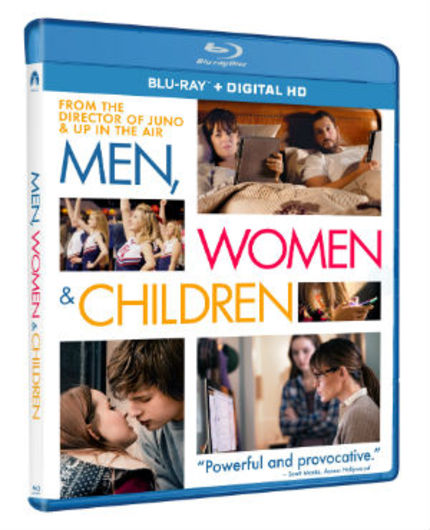 Jason Reitman's latest foray into social commentary, Men, Women & Children is available today on Blu-ray and DVD, and we have three Blu-rays -- and one book -- to give away.

When the film debuted at the Toronto International Film Festival last fall, our own Ryland Aldrich concluding his review by stating:

Even with its slight sense of preachiness, when it is all said and done, Men, Women & Children is an entirely enjoyable film. It may be overly ambitious with its subject matter, but the characters are interesting and acting assured. Like he did with Labor Day, Reitman is bound to get some stick for taking himself too seriously. But if you look past what this is trying to say (or who it is trying to say it to), there is plenty to like. And perhaps just making enjoyable movies is the reason we all fell for the director in the first place.

You can read the entire review right here.

So if that sounds like your cup of tea -- and why not, it's free! -- allow me to note that this giveaway is for U.S. residents only.

UPDATED 1/16: The contest has concluded. Thanks to all who entered!

If you qualify, please send us an email with your name and mailing address and confirm that you are a U.S. resident and that you want to watch Jason Reitman's latest movie. We'll select three people at random from entries received by 11:59 p.m. E.S.T. on Thursday, January 15, 2015; one of those random selections will receive the grand prize, including a Blu-ray and a copy of Chad Kultgen's 2011 novel, which served as the inspiration for the film.

Here is the official description of the Blu-ray and DVD:

The Men, Women & Children Blu-ray includes the intriguing featurettes "Virtual Intimacy" and "Seamless Interface," as well as deleted scenes, including a never-before-seen storyline.